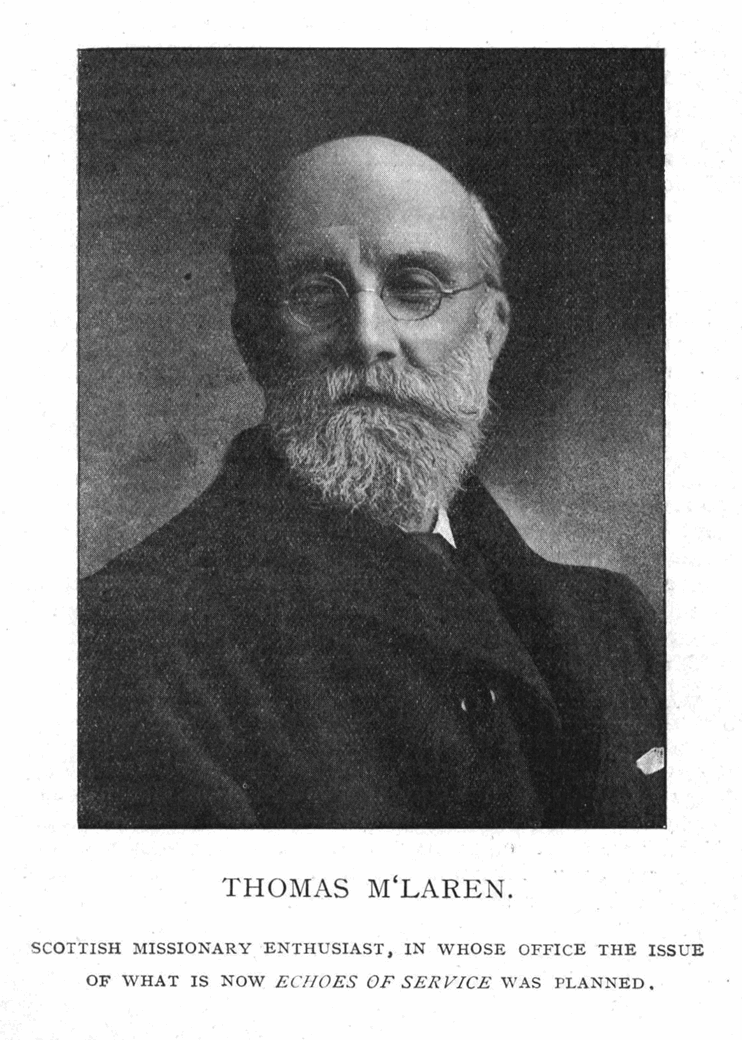 THE descendant of sturdy Highland ancestors, THOMAS McLAREN was born in the historic village of Bannockburn on the 7th February, 1832. From his earliest moments he was surrounded by all the advantages of a pious home.. When but a lad he entered the service of the Post Office in. Alloa, with which a bookseller's business was connected. From there he went to the office of the Clackmannan Colliery, and was next called to take charge of the dye-works of Messrs. Ramsay in Greenock, where he began his duties in the year 1850, being then eighteen years of age. He remained in the then famous sugar town for some four years, and formed lifelong Christian friendships, and actively engaged in evangelical work. Here also it was that he made the acquaintance of a high spirited, warm-hearted Christian worker, Miss Janet Bryce Paterson, to whom he was eventually joined in marriage on 9th April, 1856. Their first home was in Edinburgh, whence he had removed to fill a more responsible position. His energy and business connections soon necessitated his removing to Glasgow, taking up his residence there in the year 1859. For forty-nine years in the great commercial capital of Scotland he diligently and earnestly sought to serve the Lord.

Shortly after taking up residence in Glasgow, he accepted office in the United Presbyterian Church to which he belonged. His secret devotions were of a very searching and thorough nature, as his private papers now reveal. By prayer, and the reading and pondering over the Word, he quickly outgrew the formalism and restrictions of his religious surroundings. In 1861 he was preaching the Gospel publicly, evidently in the midst of opposition, as the following anonymous letter, received by him on 1st August, 186r, indicates: " Dear Brother, — When you were preaching on Sabbath night I felt as if I could rush, through the crowd and tell you how precious to my soul were the truths you were declaring. Go on with your works of faith and labours of love, and God will give you souls for your hire. Let the world cry 'enthusiast.' He who is for you is more mighty than all that can be against you.—Yours," &c.

In this same year his third son was born, and having learned somewhat during the preceding year of the scriptural teaching concerning baptism, he decided not to again conform to the modern practice of sprinkling. About this time he became associated with fellow-believers being found gathered on the first day of the week to remember the Lord in the breaking of the bread, and his name appears in the printed list of Christians assembling at Blythswood Hall in 1862.

From this date onwards with steady hand he carried the Gospel banner, year in, year out, through storm and flood. In every part of this old world he has been a cheer to the intrepid heralds of the cross. His feet have actually stood on the soil of quite a goodly number of different foreign lands, and his voice has been heard (in conversation at least) by Christians of many different races. From the rugged lands of Faroe and Norway to Afric's sunny land, India's coral strand, and Ceylon's balmy isle his journeys extended. Like the apostle Paul, he longed to see Spain, but his way never became clear to visit that priest-ridden land. So strong was his longing to see the Christians there that, when over seventy years of age, he tried to learn the Spanish language, to be ready should an opportunity come, though at that age he made an extended tour through India. After his return from India he was never so strong as previously, and for four or five years he struggled against the ebbing of the tide of life. In the end of 1907 he was present at special meetings in London, and returned home quite exhausted. That night he became very unwell, and although now and again, as the days went past, he seemed to revive and gather a little strength—getting out occasionally, and being present at a few meetings—yet it became more clear to his relatives that he had reached a stage when nothing short of a miracle could re-establish his failing health, He gradually grew weaker and weaker, and passed away without a struggle on 9th June, 1908, in his 77th year.

Mr. J. R. Caldwell, in The Witness, aptly summed up his life: "It is with unfeigned sorrow that we record the departure to be with Christ df our beloved friend and brother, Mr. Thomas M‘Laren. For more than thirty years the writer and he wrought together in happy and unbroken fellowship. In this city, for forty nine years, he has steadily laboured, in the Gospel, and by much loving service helped those who had believed. He had a large heart, embracing all saints. He was a man of much prayer, turning continually to God for wisdom, direction, and grace. His zeal in connection with foreign mission work and his love for all God• sent labourers entailed upon him a large amount of correspondence, in which he patiently and graciously toiled for many years. In the year 1871 he, with a few others (Henry Groves, Wm. Bowden, &c.), was at the inception of the periodical now grown to the fortnightly record of mission work, Echoes of Service. His was no mechanical missionary correspondentship; a loving letter of counsel and encouragement accompanied most of his remittances. This must have meant prayerful thought to keep up such a heavy correspondence, £2500 per annum passing through his hands of late years. He has been called to his rest and his reward, and to us `the memory of the just is blessed.' `Yet a little while, and He that shall come will come, and will not tarry.'"