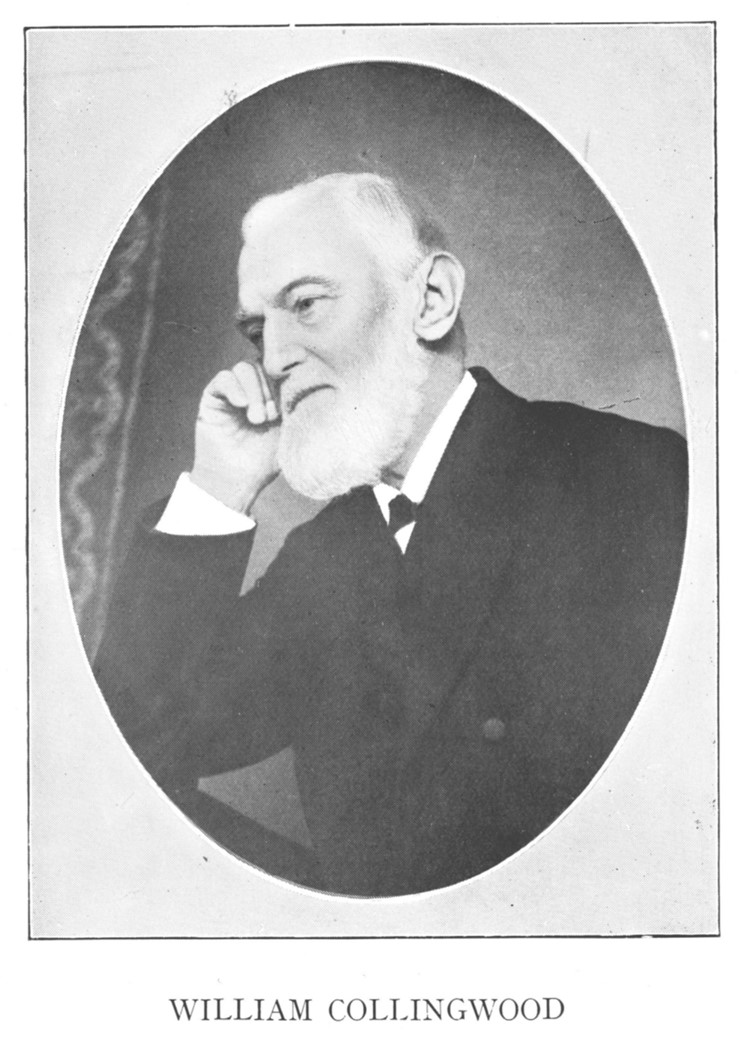 Quite a famous artist it seems,

Collingwood was an intensely religeous man, of a serious reserved nature, which prevented him from becoming very intimate with the other artists in Liverpool, or associating in their gatherings, although he joined the Liverpool Academy soon after his arrival in 1842. He was a member of the body known as the Plymouth Brethren, and spent a great deal of his time and earnings furthering its aims. He built a chapel at his own cost at Liverpool, where he was practically the minister, so far as the Brethren (who have no regular ministry) would allow it. He took Sunday and weekday services, Sunday School, etc., visiting like a clergyman, and, when away from home, used to seek opportunities for preaching, even in Switzerland, where he conducted services in French and, with less fluency, in German. Before he married, his ambition was to make enough to take him to China, where he hoped to combine missionary work with painting Chinese subjects, and his house was always a resort of missionary enthusiasts, including for example, T. Pietrocola Rossetti (A cousin of the painter) and Lord Congleton, who had been missionary to Bagdad, and who was one of the first to influence him in his choice of sect. Landscape painting he regarded as a sort of sacred art, much as did A.W. Hunt, who with his father, Andrew Hunt, was among the few intimate aquaintances Collingwood possessed outside the circle of his co-religionists.

This link has a nice picture of him when he was young; http://armitt.com/armitt_website/the-collingwood-family-armitt-museum-art-gallery-and-library-cumbria/

AMONG the long list of honoured and esteemed servants of God whose names are associated with the inception of what has become known as "The Brethren Movement," none were more loved and trusted than WILLIAM COLLINGWOOD, the friend and fellow-worker with most of that illustrious group of truth-loving men whose testimony has proved a blessing to thousands of God's people all over the world.

Born at Greenwich on 23rd April, 1819, he was educated at Oxford, where his grandfather was printer to the University. At Christ Church School he showed great aptitude for classics, but when he was offered a place on the Foundation of the College, he was not able to accept. His father's friend, J. D. Harding, and his cousin, Collingwood Smith, encouraged him to become an artist, and he rapidly came to the front as a painter of interiors and landscapes. In 1839 he settled at Liverpool as a teacher of drawing, and, after election, to the membership of the Water Colour Society. For some time he attached himself to Dr. M'Neile, of St. Jude's, at Liverpool, a then famous Evangelical Churchman. Later he became acquainted with Lord Congleton, George Muller, and other leaders of a movement which aimed at the carrying out of the Scriptures in their simplicity and entirety. In 1844 he joined the late John Price, of Chester, John Plunkett, Thomas Porter, and a few others in meeting simply in the Lord's Name at Back Canning Street, Liverpool. Afterwards they met in the Crown Street Hall, built by Mr. Collingwood, who took a leading part till he left Liverpool in 1884. He continued to the end a strong supporter of the original principle of receiving Christians as such, and a friend and fellow-worker of all active Evangelicals.

We remember hearing him recount how when speaking to a brother about the sad divisions amongst God's people, the brother replied: "Why, it's with a company in ---- you should be." He went down to see them, fully determined on no account to leave Dr. M 'Neile, to whom he was sincerely attached. Welcomed at the morning meeting, it was such a revelation of the power of God and the leading of the Spirit that he returned at night to Gospel meeting, and continued steadfastly so to meet till his decease.

In 1850, under the influence of Dr. Gutzlaff, he proposed to go out to China in the double capacity of artist and missionary. This was prevented by his marriage in the next year with Marie Imhoff, daughter of a notary at Arbon, Switzerland, and by family cares ensuing; but he became an earnest supporter of all mission work, and his house was the resort of many missionaries outward and homeward bound from the port of Liverpool.

In 1890 he settled at Bristol, where he attached himself to Bethesda, and joined with his old friend George Muller, spending his leisure time in writing many papers and booklets, among which were "The Bible its Own Evidence," "The Brethren: An Historical Sketch," etc. Valuable articles on "Doctrine" and spiritual themes appeared in The Witness over a number of years.

Mr. Collingwood's reverential love for the Word of God was a conspicuous feature in his character. So absorbed did he become in its treasures that the din of controversy and criticism scarcely reached him. In fact, the realm of controversy was uncongenial to him, for his spirit was gentle and loving; but when he did enter it he showed that he could do so with telling effect.

To those who were about him in his closing days, the spirit of contentment with the acquiescence in the will of God were very noticeable and beautiful to behold. As late as Whit Sunday, May 31, he was present at the morning meeting in Bethesda, though too feeble to take any audible part. On the following Saturday a stroke of paralysis laid him low. But his mental powers remained clear, and his spirit was bright and strong with faith and hope. A slight rally raised hopes of partial recovery, but on 25th June, 1903, a change for the worst occurred, and on the afternoon of that day he fell asleep in the eighty-fifth year of his age.

Roger Shuff has provided some useful further details on William Collingwood and his connection (largely through his son William Gershom Collingwood) with John Ruskin (an excellent biography of whom was written by the younger Collingwood) in his 'Romantic Affinities: A Brethren-tinted Perspective on the Spiritual Journey of John Ruskin' (Brethren Historical Review xiii [2017] 95-107).