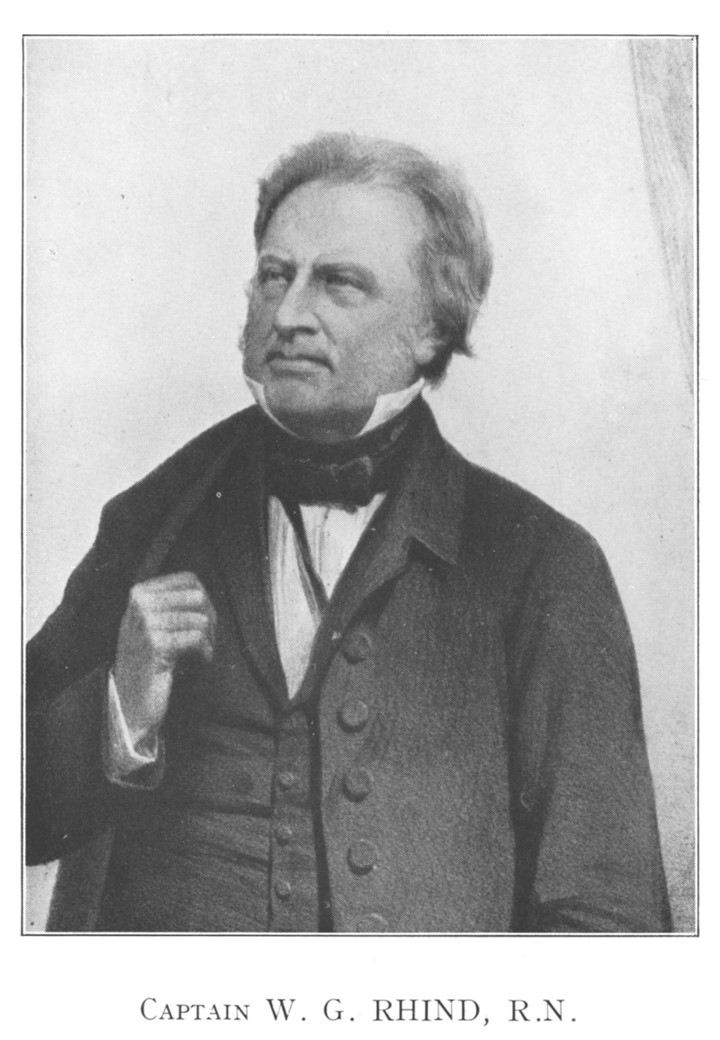 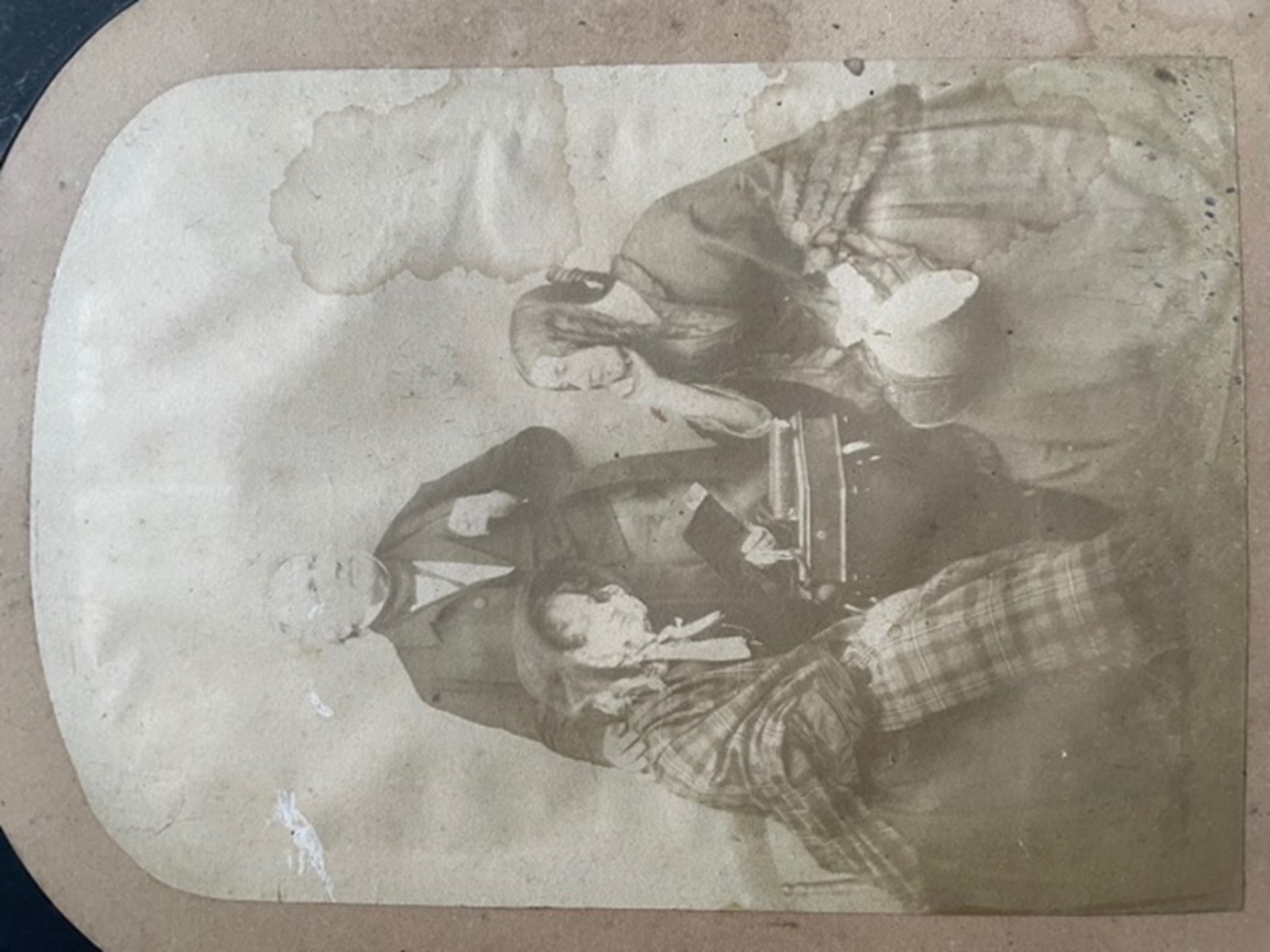 CAPTAIN WILLIAM GRAEME RHIND, R.N., was born at Gillingham, Kent, 18th December, 1794, and fell asleep 17th March, 1863. His father, William Rhind, R.N., died almost suddenly when he was only two months old. So many members of his family having been Naval men and some having attained to high rank in the service, he was early destined for the Navy, and his name was actually enrolled as a first-class volunteer at seven years of age. At twelve years he entered actual service as a midshipman, and ere thirteen years had rolled over the head of the child he was witness to the horrors of real war, being present at the action between the American ship "Chesapeake" and H. M. S. "Leopard." He was also engaged in the terrible and sanguinary fight between the American ship "United States" and the "Macedonian. " The American ship being superior by nearly one half in tonnage, crew, and weight of guns, the British were cut to pieces and Mr. Rhind and the few survivors taken prisoners to America, where he remained two years.

Afterwards in the West Indies he was brought near the brink of eternity by yellow fever. In the winter of 1816-17, peace having been proclaimed, he retired from active service as First Lieutenant, and afterwards from seniority obtained the rank of Commander. He took up his abode at Plymouth, and happening to enter a place of worship where an aged servant of Christ was preaching the Gospel, he was pointed to "The Lamb of God which taketh away the sin of the world. " The entrance of that Word gave light, and he found rest in Christ Jesus.

Christ was now all things to him, and he delighted in service for Him. He used to say: "Whenever I meet a man, I see one for whom I have a message. " Becoming a diligent student of the Holy Scriptures, he contemplated entering the ministry of the Established Church soon after his conversion. So in 1822 he entered at Sidney Sussex College, Cambridge, where the Rev. Charles Simeon was a great help to him. He also met with Mr. Alexander, a Jew, and was the first to take him to a Christian place of worship, and had the joy of seeing him brought to the saving knowledge of Christ. Mr. Alexander was subsequently appointed Bishop in Jerusalem.

After three years he left the University, his health having broken down. After a most serious operation he recovered his strength and devoted himself to the Master's service. Buying a sailing boat, freighted with Bibles and tracts, he visited the boats and ships and vessels of war in Plymouth Harbour. He also preached in the open air, a work for which the Lord admirably fitted him and in which He condescended largely to use him. He planned a Bethel for Sailors at Plymouth and a Reading Library for invalid seamen in the R.N. Hospital. The Duke of Clarence (afterwards King William IV) visited Plymouth, and Mr. R.'s father having been his instructor in navigation, he asked Mr. R. what employment he would desire. The true-hearted soldier of the Cross replied: "Your Royal Highness, to remain as I am. " Having put his hand to the plough, no prospect of worldly advancement could induce him to look back.

In 1832 he was invited by John Synge to Ireland, and until 1838 he visited, dispensed medicine, and preached the Gospel on that large estate with good results. It was then he became acquainted with Lady Powerscourt, at whose house large meetings of Christians were held, some of whom had left the communion of the Church of England for the simple and Scriptural mode of coming out from amongst the unconverted, and meeting simply in the Name of the Lord in dependence on the guidance of the Holy Spirit.

His mind being exercised about ministry and the separate character of the Church, he could not conscientiously become a minister of the Establishment, and declined the living of S----- which was pressed upon him. After his return to England with his wife and family, he resided for nearly four years in the city of Hereford. Having from conviction embraced the views held by those Christians who meet simply as brethren in Christ, he met every Lord's Day with those in Bridge Street for the breaking of bread (Acts 20. 7). He taught and exhorted with authority and weight, and as an evangelist no one could set forth more clearly than he did that all was of grace through faith.

In 1843 he became a resident in Ross. A little room was rented at Wilton Road, and at first ten persons met together to remember the Lord Jesus as in early apostolic times; but very soon the room was too small, and over 100 met in happy fellowship. Mr. R. made preaching tours in various parts of the kingdom, preaching to large and fashionable crowds at Cheltenham and other places. A great personal soul-winner, whether by rail, coach, or steamboat, he would immediately present every one he met with a tract. This he called "showing his colours at once. " He taught much and often of the return of the Lord Jesus, more and more to him the "blessed hope. " God made this, His dear servant, to be not only a clean vessel, but a large one, and then filled him to overflowing with love. This was the secret of that happy beaming countenance, the result of communion with Him whose presence ever imparts light and gladness, and which caused children to call him "Mr. Gloryface!".

Such was the esteem and affection felt for him by the early "chief men" that he was one of the specially selected guides who met at Plymouth in 1845 in the interests of peace at the time of the strife between Darby and Newton. He wrote books which have been much valued, such as "The Tabernacle in the Wilderness," "The Testimony of the Times," etc., and also a very useful book for the young, "The Six Days of Creation, " all of which passed through several editions.

He passed away at Weston-under-Penyard, 2 miles from Ross, on 17th March, 1863. His remains were taken to the burial ground attached to the Barton Meeting Room, Hereford. A service was held in the presence of many hundreds who surrounded the grave.

David Greenhalgh said ...
Interesting to read. WG Rhind’s wife, Harriet Isbell, nee Collins was my great great great grandmother, I have the above picture signed by WG Rhind which is a 1858 sketch from a photo, which I also have, the photo includes Harriet and a young woman who might be their daughter Hadger. Nice to know that all this history is still recorded.
Tuesday, Jan 26, 2021 : 04:11
Timothy Stunt said ...

I have previously assumed that J.B.I. who wrote Faithful unto Death : a Memoir of W.G. Rhind (1863) was Julius B Isbell (aged 42 in the 1861 Census) living in Ross. Julius Isbell would have been born (in Gibraltar) c.1819 and therefore would have been 9 years old when Mrs Isbell married WG Rhind in 1828 so I have conjectured that JBI could have been one of W.G. Rhind's stepsons. However in the 1851 census the stepson's name in WG Rhind's household is given as John B. Isbell.  I hasten to ask David Greenhalgh who is a great great great grandson of W G Rhind's wife whether he can confirm my supposition. JBI's account of WGR is heart-warming!    Timothy Stunt

Tuesday, Jan 26, 2021 : 06:06
David Greenhalgh said ...
Hi Timothy, you are correct, there was no John Isbell. Harriet had two sons by Captain Richard Woodward Isbell, Edwin James Isbell and then Julius Buchan Isbell, born 4 July 1818, as you say, in Gibraltar. I think WGR had 3 children with Harriet, Mary, who died young, Hadger and Samuel
Tuesday, Jan 26, 2021 : 22:03
Timothy Stunt said ...
Thank you David! One further question: Was Hadger a nickname for WGR's daughter Harriet Sarah who married John Bidlake? Timothy
Wednesday, Jan 27, 2021 : 05:49
David Greenhalgh said ...
I didn’t know that was her real name and I don’t now remember the source of reference to ‘Hadger’, yes married to John Bidlake who was Julius’ cousin! I always wondered about the name Hadger, can’t find it referenced as an abbreviation or nickname for a girl on Google. I would either have found it in the written records of Julius’ wife Mary nee Pritchard who recorded everyone’s birth death and marriage in her miniature bible, or from the family tree assembled by the Methodist church as part of the celebration reopening of Digory Isbell’s cottage in Trewint, Cornwall in around 1954. Digory was Richard Woodward Isbell’s grandfather and John Wesley used to stay at his cottage
Wednesday, Jan 27, 2021 : 16:30
Margaret Connolly said ...
I just wanted to let you and David Greenhalgh know that I grew up in a small townland called Aghowle in Co. Wicklow Ireland on a farm that was originally a tenant farm on the Synge Estate where Mr Rhind lived from 1832 to 1838. A few years ago a wrote a book about the history of the townland and its farming community and I included a section about Mr. Rhind's time on the estate ministering to the tenants (including my own ancestors). The information I included was taken from the publication Faithful Unto Death, and I also included a photograph which would be a copy of the one attached here.
I thought his descendants might like to know his time spent in Co. Wicklow and his good works there have been recorded.
I was trying to find out if Mr. and Mrs Rhind had any children while they lived in Wicklow?, I did not come across any records for them when I was carrying out my research.
Kind regards
Margaret Connolly
Wednesday, May 5, 2021 : 02:08
David Greenhalgh said ...
Hello Margaret, I didn’t know they lived in Ireland, my great great grandfather would have been only 14 in 1832 and so he must have lived there. WGR and Harriet’s daughter Harriet (Hadger as I had her recorded) was born in 1835, so she would have been born in Wicklow. I don’t have the dates for when their other two children were born. I assume the photo you have is the sketch. If it was of any interest I would be happy to send a copy of the photo it was drawn from. I don’t think you can attach photos to this comment section, David
Sunday, May 30, 2021 : 00:26
Marty said ...