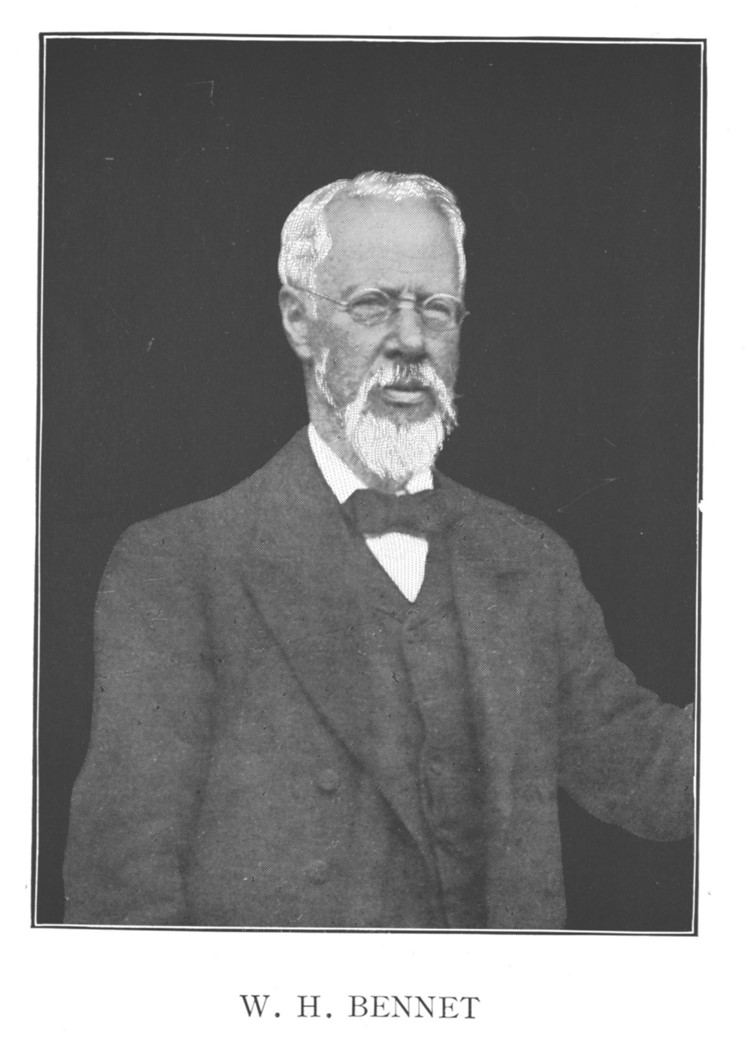 WILLIAM HENRY BENNET was born at Ashford, Kent, where his father was in business as a confectioner. Brought up in the Church of England, he was convicted of sin and converted to God when young, and soon manifested an earnest desire to serve the Lord. His first inclinations were toward railway life, and at sixteen he passed an examination and entered the Railway Clearing House. In a little while he returned to Ashford to help his father in the business. Here he was so impressed with the indifference to spiritual things that he commenced to distribute tracts and hold cottage meetings.

In the year 1862, at the age of nineteen, as a diligent student of the Word, with a willing heart, saying, "Lord, what wilt Thou have me to do" (Acts 9. 6), he was awakened to the errors of "baptismal regeneration" at the beginning of life, and the untruthful words concerning a "sure and certain hope" pronounced in the burial service over known ungodly persons at the end of life.

Once exercised, he rested not till he fully inquired "What saith the Scripture?" (Rom. 4. 3), and as a result was immersed as a believer, then severed his connection with the National Church, renounced all sectarian associations, and for the next fifty-eight years took his place with those who "gather together in MY Name " (Matt. 18. 20). At this time he was privileged to become acquainted with, and be helped by, the ministry of W. H. SOLTAU (whose lectures on "The Tabernacle and Priesthood" he attended), J. L. HARRIS, author of "Law and Grace," and others who greatly helped the young disciple in the school of God.

The next move seems to have been made to Merriott to assist Mr. Gribble, whose evangelistic labours were greatly blessed in these parts. During a three months' stay in this place, in 1862, W. H. Bennet first had the joy of treading "the path of faith. " His parents were not happy at their young son moving on, to them, such indefinite lines as to support or future service, but two signal proofs of answers to prayer encouraged the young man. On the way to Hampton Court on the Master's service a gentleman gave him a lift in a dog-cart. Asking his business, Mr. Bennet tried to explain, and on leaving the gentleman handed him half a sovereign. Another Sunday, preaching in the open air, one of two gentlemen who had listened at the door of an inn came forward, asked for a tract, and handed him a sovereign. This, when leaving home for wider service, he was able in answer to the anxious inquiry of his parents to assure them that "he had all he needed. " And to the very end, although in trials oft, he was enabled to say, "My God has supplied all my need" (Phil. 4. 19).

After moving about with considerable acceptance, in consultation with R. C. CHAPMAN and H. W. SOLTAU, he settled in Bow, helping in a school and abounding in the work of the Lord in the district around.

In 1863 he first visited Yeovil, and finally settled there in 1869. In 1871 he married Miss Softley, who was a true helpmeet till her departure on 8th January, 1919, at the ripe age of 89. In the same year the Yeovil Conference was commenced, thus for 49 years he guided these profitable gatherings and was a true shepherd of the flock.

A wider field of service was first opened to our brother by the issue of The Golden Lamp, which for twenty-one years supplied valuable ministry. On the discontinuance of the Golden Lamp in 1890, W. H. Bennet was invited to join Dr. Maclean and Henry Groves in the work at Bath; thus for thirty years he has taken an active part in this ever-growing work, continuing to reside at Yeovil, but spending a part of each week at Bath. Ever cautions and courteous, his painstaking and prayerful judgment on any matter was greatly valued.

As a ministering brother he was known in most parts of the British Isles and in some parts of the Continent. His calm setting forth of great truths, of expositions of the Psalms, or other parts of Scripture were appreciated by careful listeners. His writings were clear and convincing. Knowing the Ritualistic tendencies of the State Church, he was not slow to warn those likely to be ensnared thereby.

The leading article in Echoes of Service often bore the initials "W.H.B.' " as well as many papers in The Witness, to which he contributed for many years, the last papers being "The Holy One of God," and another appropriately bearing the title "The Eternal Hallelujahs. "

W.H. Bennet's ongoing connection with Yeovil is underlined by the fact that it is over his initials that the account of Henry Dyer (another Yeovil Brother)  can be found in Pickering's Chief Men. The Park School's link with the Brethren may have lasted a little longer as I recall that the sister of the late Peter Cousins was the school's Headmistress for a time.   Timothy