Household Baptism: A Scriptural Inquiry as to the Claims 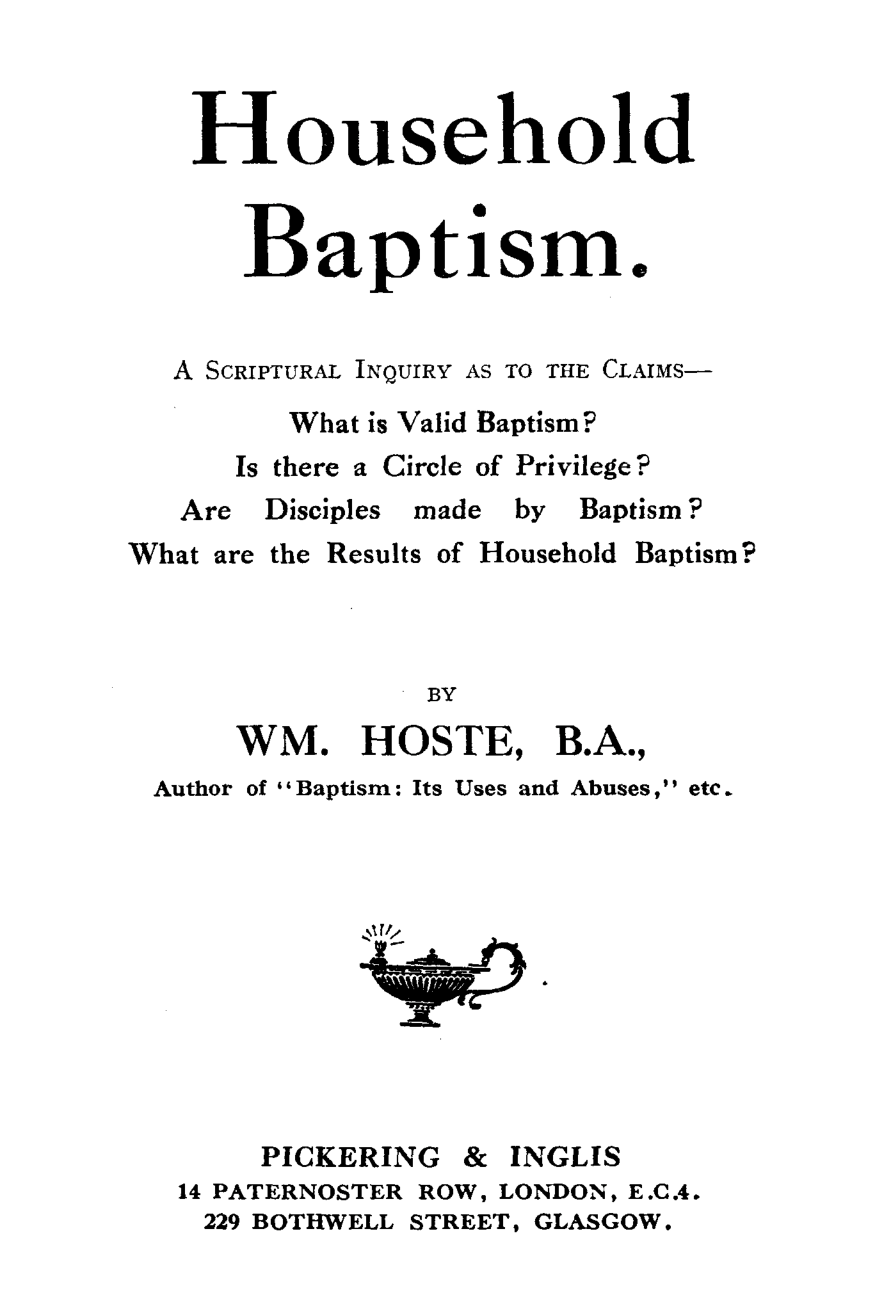 Some interesting extracts I have reproduced below. The second paragraph is particularly important as I have heard that discussion myself. If you are to have so-called "liberty of conscience as to Baptism", that then opens itself to accepting any and every fanciful claim of Baptism, even that done in the Catholic Church, no matter how un-Scriptural it might be!

Two principles of obedience run through the Scriptures: "No adding to or diminishing from the Lord's commands" (Deut. 4.2; Prov. 30.6; Mark 7.9); "No turning aside to the right hand or to the left " (Deut. 5.32, Prov. 4.27). The one applies to teaching, the other to practice. House-hold Baptism violates both principles. It adds to the "one baptism" of Ephesians 4; another, that of unregenerate households; forms "a circle of privilege" for these baptised households, a thought abhorrent to the present dispensation of grace to all; deprives young converts of that which was intended to be the first step in their Christian life, a public identification with Christ in baptism, and as we shall see, most serious of all, substitutes a teaching of children "to live in accordance with their baptism" for the true teaching laid down for such in the Word of God. In a word, its whole tendency is to make void the commandments of God to keep Household Baptist traditions.

One Household Baptist teacher asserts that even sprinkling with holy water by a Romish priest is valid, because done in the Name of the Trinity; but this Holy Name is not a mere incantation, as the exorcists of Acts 19.13 discovered. The demons mocked their claims, for the character of the men robbed the Name of its reality and power. The validity of baptism depends on whether it is rightly applied and Scripturally performed.

The occasion of Mr. Russell Elliott's pamphlet was a local trouble in an Assembly four hundred miles from his home in London, in which he felt called to intervene, because a local Household Baptist had written to him on the subject, and because he had ministered there from time to time as a visiting brother. I do not question his motives, I do his wisdom. Were such a principle of interference admitted, what a chaos would result! Are, then, itinerant teachers and evangelists to become "outside bishops," to be called in by one side in a local controversy to set things right?

I notice the side of baptism Household Baptists emphasise is that of Galatians 3.27. They degrade that most important phrase, "Have Put On Christ" to mean merely " profess Christianity," and that, in the case of their unregenerate households, falsely. They seem to have "profession" on the brain. A man should not masquerade in a uniform if he is not a soldier. These baptised households remind one of the small boys, so common during the War, running about the streets in fake uniforms.

Indeed, what sense has "household" if limited to the babes? It must include those who form the "household," converted or unconverted, children of responsible age, and household servants, too. If Household  Baptists only baptise unregenerate infants (and in how many households there are none such ?) they ought to style themselves simply "Infant," not "Household," Baptists.
An attempt has been made to distinguish between oikos, as meaning the family only, and oikia, the household, as including the servants. Professor Grimm notes the attempt, but does not allow its validity. The distinction does not hold good in the N.T. Instances might be quoted: Did the house of Pharaoh (oikos) (Acts. 7. 10) exclude the servants? Are we to believe that Cornelius' household servants were not included in oikos of Acts 11. 14? Were the servants of Stephanus included in the ministry of 1 Cor. 16.15 {oikia), and excluded from the baptism of chap. 1.16 (oikos)

Mr. Russell Elliott boldly cuts the Gordian knot. Baptism, he says, is not a command at all, "as Baptists are so fond of saying." The word "command" suggests, he affirms, that "the act of baptism is the principle thing," that it is "a meritorious act" to be baptised. This is a strange and arbitrary assumption. Did the fact that the Lord commanded His disciples to evangelise have this meaning? Oh, but, objects Mr. Russell Elliott, how can you command a person to do what he cannot do (i.e., baptise himself) if "he is entirely dependent upon the will and act of another ?'' In a very simple way. Suppose an officer were ordered in the presence of his men to lead them to the attack, that would be equivalent to a command to each soldier to follow; or a mother who tells her nurse to put the children to bed, would she not by this fact order each child to go to bed? The daughters of Zelophehad were commanded to marry within their tribe, but were certainly dependent on the will and act of others (Num. 36. 6).