Household Baptism: Is it from Heaven or from Men 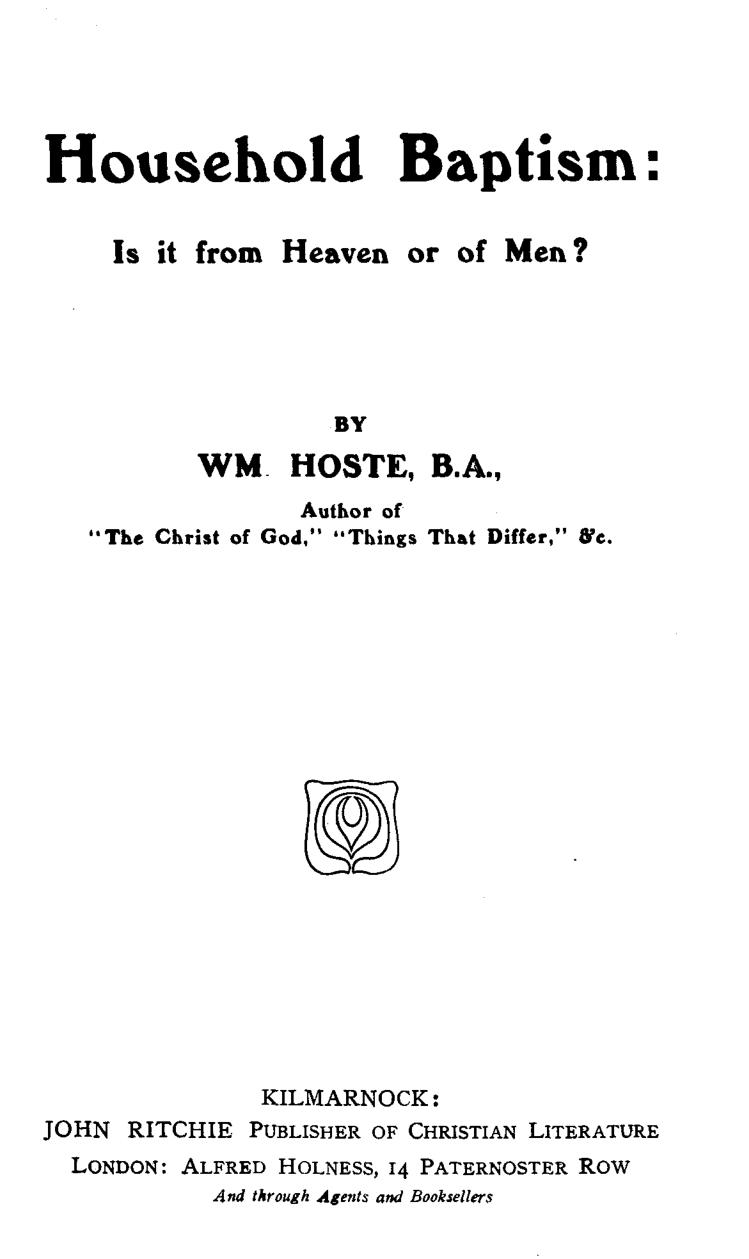 Very good pamphlet, and well worth reading. I produce a few extracts, mainly the first ones to show how what in this generation some of my friends call "Household Baptism" is merely "Infant Baptism", as they never suggest anything beyond the 'Baptism' of their own children, whereas the term in it's original sense included any members of the hosuehold (e.g. servants).

This household baptism, teaching is far more serious than it may at first appear. It denies, as we shall see later, God's characteristic grace to the world in this age. It obliterates the line of demarcation so clearly laid down in the Word between light and darkness, between death and life. What does it entail ? Nothing less than baptising whole households, including children, servants, retainers, irrespective of age and moral condition, if only one of the parents be converted. The family, according to this theory, can now call itself a "Christian household," though all its members, except one, be unregenerate and at enmity with God.

The Lord has warned us that His doctrine will divide, not unite: "I am come to set a man at variance against his father, and the daughter against her mother, and the daughter-in-law against her mother-in-law, and a man's foes shall be they of his own household." The Gospel of Christ normally makes divided households. Household baptism professes to make "Christian households." Can it then be of God? "Oh, but," say some, "they have been baptised on the ground of profession." How can a babe profess anything? And why should a servant if manifestly not born of God be asked to profess anything? It is all sheer hypocrisy, hateful to God, and most dangerous to the soul.

To baptise by sprinkling is just as impossible as "to break bread" without eating. Mr. W. S., however, accepts sprinkling as true baptism!

The only way Mr. W. S. can connect children with baptism is by falling back on the figurative baptism of Israel in the Red Sea and in the cloud. But even this is a broken reed, for figuratively, Israel were a redeemed people, and their little ones correspond, not to literal infants in the flesh, but to newborn babes of the family of God

Our household baptist friends, make little or no reference to the baptising of unsaved servants, but this is just as essential a part of their system as baptising babes. One of them is reported to have said that, had he lived in the old days of slavery, and a slaveowner had been converted, he would gladly have baptised the whole slave gang with their master! And this is no more than the household baptism theory consistently applied!