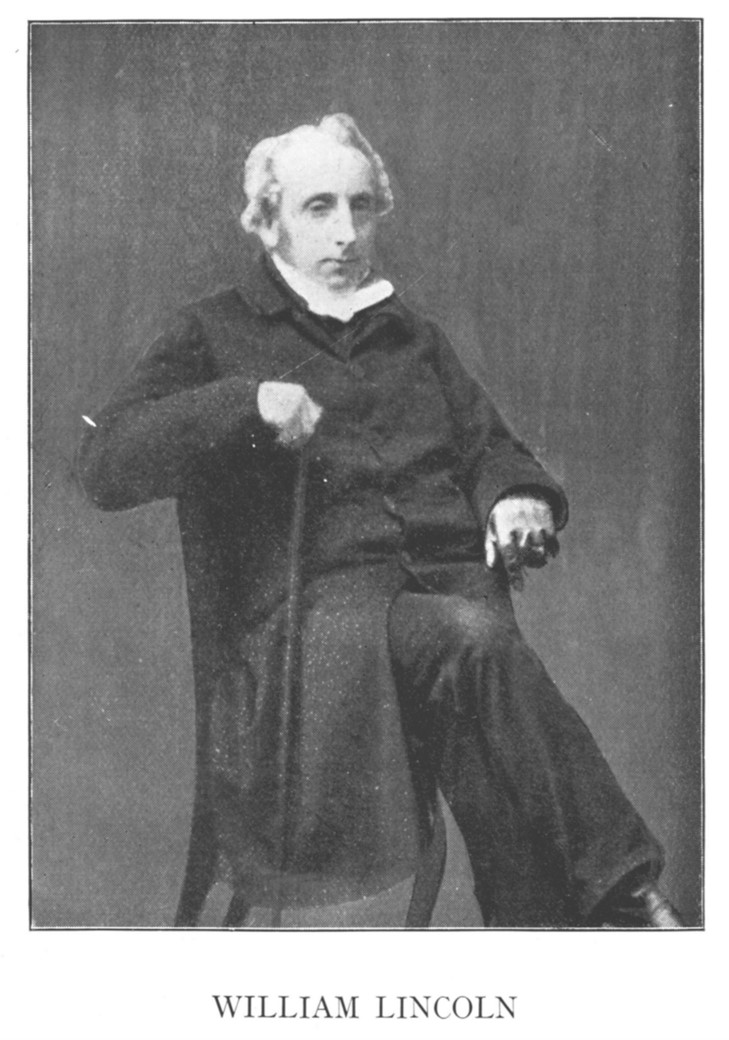 WILLIAM LINCOLN was born in 1825, in the east of London, and converted to God at the age of 17; his soul having been convicted of sin through reading Doddridge's "Rise and Progress of Religion," though the book did not bring him into peace. Desiring to serve the Lord, he first thought of missionary work, and was a year studying under the Church Missionary Society, but was refused on account of his parents having died of consumption. He then entered at King's College, London, of which he became an associate; was ordained at Preston, in 1849, by the Bishop of Manchester; laboured in the establishment there and at Pudsey; and finally came up to London as curate at St. George's, Southwark. Whilse there he preached mostly at a district church in the London Road, drawing very large numbers; and in 1859 obtained the appointment as minister of Beresford Chapel, Walworth. Here his preaching was very attractive, and the place was soon filled to excess.

But his soul began to be exercised about his position in the Church of England, though he preached and published a sermon on Infant Baptism, seeking to refute Mr. Spurgeon's memorable discourse on Baptismal Regeneration. But he continued more and more to realise that his position was a false one, and the remaining copies of the sermon just mentioned were carefully burnt. In 1862 he finally broke his connection with the establishment. He read out his reasons for so doing on a Sunday evening to a congregation which crowded the building to the utmost. The effect was, of course, at once manifested in the reduced attendances, though large numbers still continued with him, a few, however, dropping off by degrees.

Immediately after his secession, he wrote the "Javelin of Phinehas,"  in which he exposed by the Word of God, the evil of the union between Church and State. The work at Beresford continued to progress, though the changes were gradual; one step at a time, we may say, just as light was given. Many attempts were made to get Mr. Lincoln to join one or other of the various denominations; but his expressed determination always was, "never to join anything or any party," but to cleave to the Lord alone. His purpose and joy ever was to press the truth of gathering to the Lord's Name alone, making Him the one centre, and going forth "to Him, without the camp." None preached more faithfully the doctrine of separation, and to Jesus only; and we may add that he practised what he preached.

For the sake of allegiance to his Lord, and obedience to His Word, he surrendered worldly prospects and emoluments of no ordinary character. He had his reward in seeing many believers walking according to the Truth; and one by one the old practices were abandoned, and worship according to its Scriptural simplicity was established at Beresford. Week by week the saints began to assemble together to break bread, in obedience to the command of the Lord, as gathered unto Him alone, and submitting to the Spirit to guide as He pleased.

While giving open ministry its due place, Mr. Lincoln never failed to press godly order and rule in the assembly, and opposed the spirit of democracy and communism having any place in the church of God. He was also very careful to maintain the value of ministry in teaching from the Word of God, by those whom God had sent as teachers; and the time of service was made half an hour earlier, in order that, whilst time was given for worship and ministry in connection with the breaking of bread first, there might be special opportunity after for the ministry of the Word. All who have had experience of this would confess its value; and the benefit to the assembly has been incalculable. And thus helped and kept by God in His grace, the work went on at Beresford for 28 years, though loud were the prophecies, at the outset, that it would not last a twelvemonth.

It was in this ministry of the Word that Mr. Lincoln was so powerful an instrument in the hand of God. He presented Scripture in its broader features with a clear grasp of principles, by which the saint was to be guided in filling in details. In this way his ministry was most useful, as it put the hearers in the way of gaining instruction for themselves from the Word. In prophecy also he was much used, especially in connection with the Lord's coming for His Church, and the apostasy of Christendom. He loved to press the truth of the Lord's imminent return, and lamented much what he thought was a growing coldness in respect to it. Earnestly he warned against the spreading darkness in the professing Church, and pressed the truth of separation from evil.

Always accessible to any who came to him with difficulties and questions, he was used to the help of many in all parts of the world; and his answers were always remarkable, as was his teaching, for clearly presenting and pressing fundamental principles. As to the source from which he himself drew the knowledge he had, though with large opportunity of studying the writings of others, he always confessed himself as "the man of one book;" he drew what he gave to others from the fountain head—from the Word itself. His own writings were not very numerous, and we may mention the principal of them: "Joseph and Jesus" and "Four Lectures on the Second Advent," published before he left the establishment; "The Javelin of Phinehas," published immediately afterwards (difficult now to obtain); and, subsequently, "Lectures on the Hebrews," "The Epistles of John," "The Book of the Revelation," and "Typical Foreshadowings in Genesis;" with a series of Lectures and leaflets on some fundamental truths in the Word of God.

Mr. Lincoln's heart was in the work at Beresford, to which he considered the Lord had specially called him, though many have objected and thought he should have extended his service more for the benefit of other assemblies. However this may be, a serious obstacle to it was his condition of health, and few probably had any idea of his continued sufferings for about the last twenty years of his life. It is a marvel that he was able to continue to study and teach so constantly as he did; but his nervous system was gradually undermined.

The last time he spoke was on 18th September, 1887, and, remarkably, it was upon the early verses of 2 Corinthians 5. The last time he was present at the breaking of bread was on 1 lth December. But though the outward man was perishing, the inward man was renewed, and his joy and peace continued unclouded. His remark, as he left the meeting for the last time, was, "It is all well; the Lord reigneth."

Life's sand ran slowly out, and the body grew weaker and weaker; but his spirit was stayed upon God, and he could say, "I'm full of praise and joy." And thus the end came, and the last answer he could give upon earth, when asked if he were happy, was, "Yes, in the Lord, " and in a few brief hours he was "with Christ, which is far better." He quietly fell asleep, without any apparent pain, early on the morning of the 25th April, 1888.

We can but admire the grace of God displayed in his unswerving and unfaltering faithfulness to the Truth of God. Whenever he saw a thing to be right he persisted in it, no matter what the consequences to himself or others. And yet he was not a man of extremes, for one of the great lessons of Scripture he ever sought to impress was the balancing the Truth of God, and never to push one side of truth to the disparaging of another. A simple verse which he passed on to Mr. J. R. Caldwell truly indicates his aim and spirit:

From the records at https://www.lan-opc.org.uk/Lancaster/stmary/marriages_1853-1856.html it appears that on 2 May 1855 William Lincoln [who was not yet 30 years old] was a 'widower' ' when he married Mary Elizabeth Wilson, 'spinster of King Street', Lancaster. He is described as a 'Clerk in Holy Orders, widower of St George's Southwark, and his father is given as 'William Lincoln, gentleman' but unlike the bride's father, Stephen Wilson, he was not listed as a witness. From the subsequent Census records it appears that Lincoln was born in Bethnal Green and that there were no children by the second marriage. In 1861 they were living in Camberwell and he is described as "Clergyman (Minister of Beresford Episcopal Chapel, Walworth). In 1871 they have moved to Stockwell, Lambeth but he is still 'Minister of Beresford Chapel, Walworth'. In 1881 they have moved back to Camberwell but his name is given as 'Walter' and his position is 'Minister Beresford Chapel no denomination'.

None of these sources was available forty five years ago when I used some previously unknown materials for my account of William Lincoln in The Witness (May 1971) pp 166-169.  Timothy Stunt

Forgive me if I raise another question. HyP's account of William Lincoln in Chief Men among the Brethren closes with the verse which Lincoln commended to John Caldwell:

This is a stanza which is conspicuously absent from all the hymn books in my collection except Hymns of Light and Love where in the Index its authorship appears to be unknown.  It is not included in Julian's Dictionary of Hymnology but an inconclusive Googling search suggests that it is sometimes loosely attributed to Hudson Taylor and more specifically to Charlotte Elliott.  Can anyone enlighten me as to its authorship and where it first appeared?  Timothy Stunt

Thank you Martin...my mistake, or rather HyP's inaccurate quotation, or perhaps he was using Hymns of Light and Love!  As a longtime admirer of Charlotte Elliott I am very glad to have that clarified.  Timothy Stunt