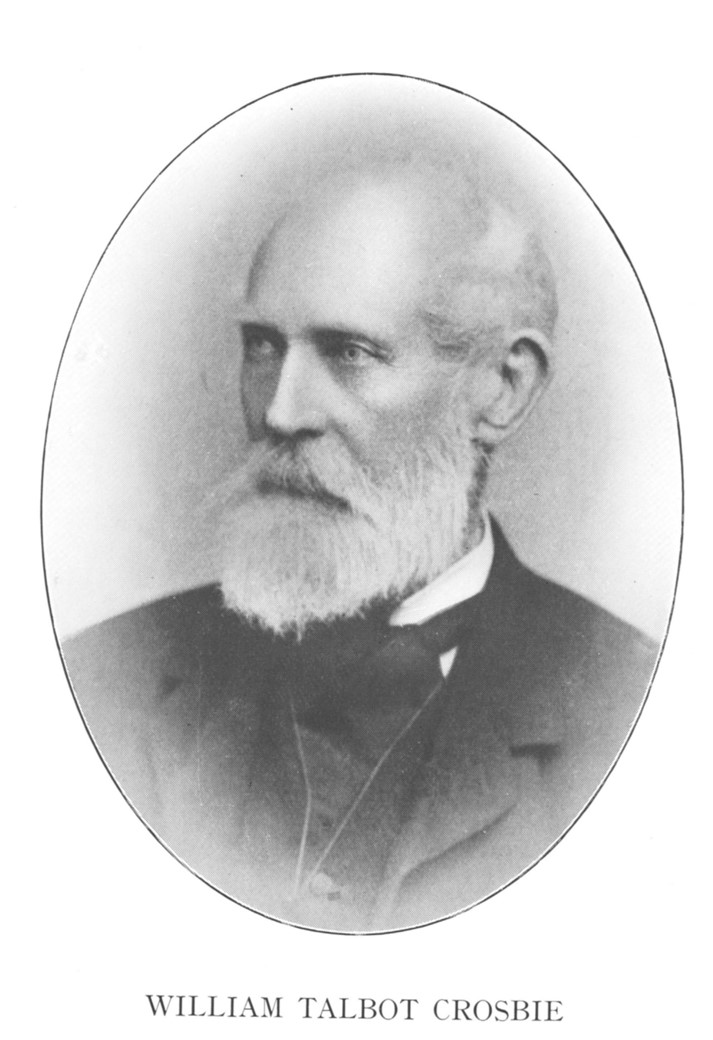 WM. TALBOT CROSBIE, of Ardfert Abbey, was the third of the Kerry landlords whom the Revival of 1861 brought out so boldly for the Lord to serve Him in the Gospel, R. J. Mahony and F. C. Bland being the other two.

Born in 1817, Mr. Crosbie was brought to Christ as a very young man. After a long minority he entered upon the management of his large estate, and aided by his young wife, a sister of the late Lord Gwydyr, set to work to rearrange the farms and instruct the tenants. After a few years came the famine, but thanks to the measures Mr. Crosbie had taken in good time, the Ardfert Estate was saved.

In the midst of such labours as these, the mighty breath of the Holy Spirit, first felt in Ulster, began to be heard, and, at first, through unknown men and feeble instruments, the message of the Gospel came as glad tidings to many. Every part of Kerry was affected, though only as to the Protestant population. The homes of the three we have named became the centres of a Divine energy which spread itself in all directions. The meetings originated then in the granary at Ardfert continued without interruption for many years. Many and wonderful were the scenes of awakening there and in Tralee, under the ministry of J. Denham Smith, T. Shuldham Henry, and many others whom Mr. Crosbie brought to Kerry and accompanied in the work.

JOHN. HAMBLETON, in his "Buds, Blossoms, and Fruits of the Revival," says: "I went to see Mr. Crosbie... The butler (Fidler his name) and all the servants were happy and rejoicing Christians and becoming real labourers in the vineyard. In the evening we held a meeting in the loft, and upwards of 100 converts with open Bibles listened to the expounding of the Word; and such a time of refreshing we had that it seemed Heaven had come down to earth. Every Protestant in this village seemed converted to God."

The effects upon himself of this spiritual movement were very great. A Christian before, he now received his call to a new life of liberty, of joy, of deyotion to his Master, of separation from the world, and of service in the Word of God and the Gospel, which constituted together a complete transformation of character and new departure in the activities of his energetic nature.

He had been prominent in county, political, and fiscal affairs. As Grand Juror and Justice of the Peace he had laboured for the good of the county with an energy and capacity that fitted him to be a leader of men. But now, so powerfully was he possessed by the reality and blessedness of his place in Christ, his Heavenly inheritance, and the hope—a present and real one to him—of Christ's early return to call His own to Himself, that after full consideration, and not without many a wrench and the severance of old associations, he retired from it all, resigned his deputy lieutenancy and magistracy, and gave himself to the service of the Gospel and the gentle pursuits of his own home farm and the hospitalities of his Christian home at Ardfert Abbey.

It was Christian work and service that ever held the first place in his heart. With Mr. Mahony and Mr. Gordon Oswald he preached in Naples and other parts of Italy. He worked in and around Lurgan, and for many years bore the principal expense of the Gospel mission there. Everywhere he went he was ready to give his testimony for Christ, and had great power and tact in personal dealing with his friends, guests, and casual acquaintances.

He had great delight in the Dublin Believers' Meetings, whereat for some twenty-five years he was a constant attendant and frequent speaker. He was brought up in the Evangelical branch of the Church of England, but with the deep spiritual movement of 1861 came also the spirit of inquiry as to the mind of God upon many doctrines hitherto unquestioningly accepted. Among these were infant baptism, apostolical succession, priesthood, and Episcopal ordination. As the result, he and his family began to meet with other recent converts under the name of Christian only, without connection with any existing sect or denomination for fellowship, prayer, ministry of God's Word, and the celebration of the Lord's Supper.

Among his papers was found the following: "If so be that, contrary to my hope in the Lord's coming, I should fall asleep in Jesus, I desire that my funeral should be conducted in the simplest and most unsectarian manner possible, having for many years renounced all connection with any sect, believing as I do that Christianity is a higher thing than any combination based on human theology."

He also referred to himself as "a sinner saved all of grace, having no claim whatever to any merit of my own, but resting solely on the all-sufficient merits of my adorable Saviour, in whom alone I have trusted since my conversion in 1839, and who has supplied all, all my need, in spite of all my failures."

He passed away on September 4, 1899, at the ripe age of 82. His body was buried in the ancient ruined Cathedral of Ardfert, the services being conducted by his two younger sons and son-in-law.