Discipline and Position of the Churches; Considered in Connection with what is Commonly Known as the Exclusive System 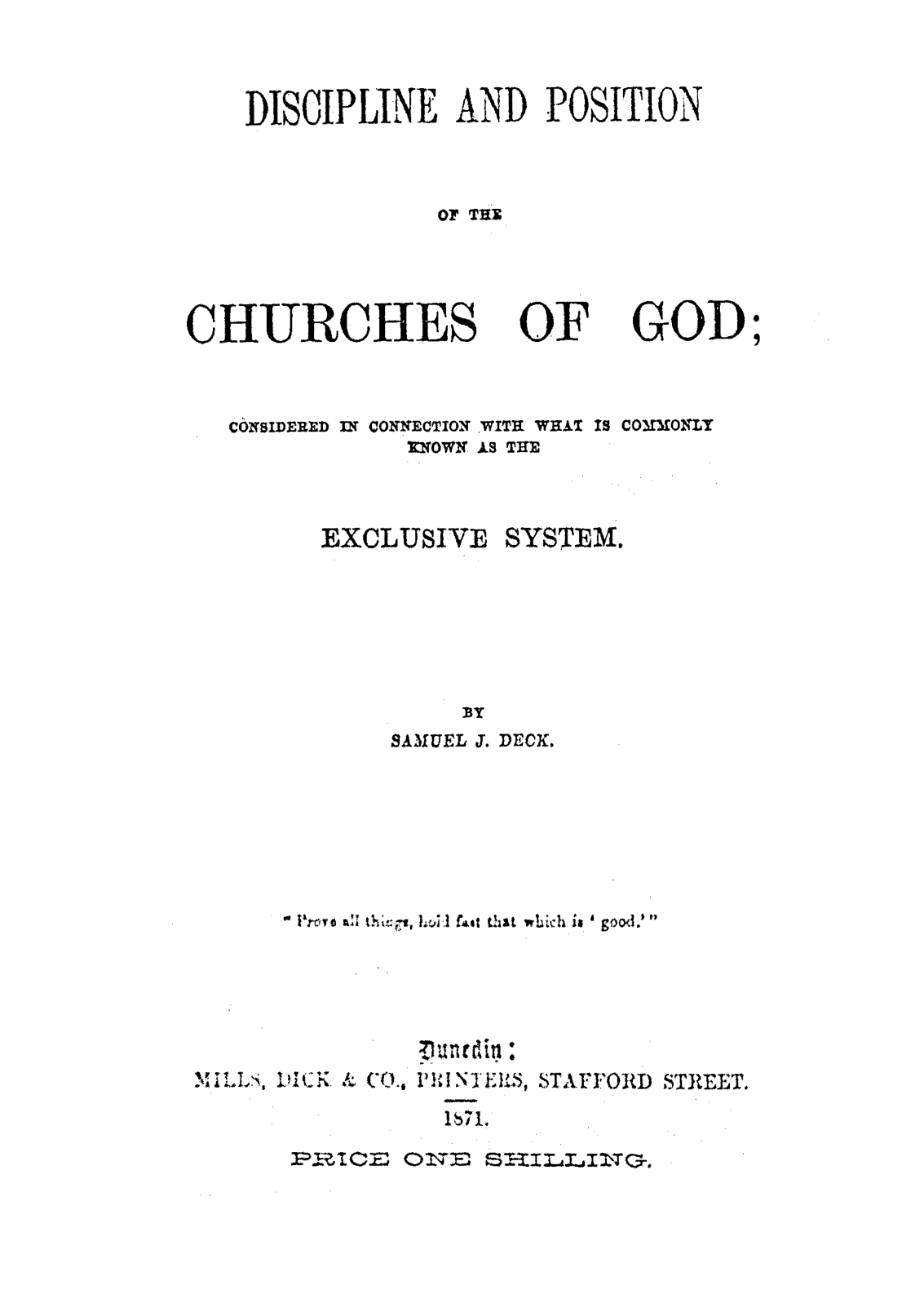 My Dear Samuel Deck, - I am glad for your own sake that your tract is withdrawn; you will perhaps, ere I write this, have received a letter from me. Its effect I had no fear of, for the simple reason that it wholly gave up all the principles brethren meet on, and would be judged by every intelligent brother.

The loose brethren have done so pretty generally. I could give you very easily an account of all those you speak of, but feel it is better to avoid speaking of individuals. The question is not whether they are logically in precisely the same position as the blasphemers, but whether their position justifies their not being received to communion. They are not according to scripture "a new lump," if they acquiesce in evil in their midst, not clear of the committed sin. So jealous is the apostle as to the truth, that a simple friendly adieu makes a man partaker of his evil deeds, how much more a wilful, determined reception of them into communion — one of the pastors holding most of the blasphemous doctrines, and when the loose brethren pretended that Bethesda had changed, and acted in discipline, C. declared they had not, and that as far as he knew, they would do the same in like case, and that he did not know a single person at Bethesda who held Mr. N. for a heretic. This was Mr. Craik's published statement long after the matter had happened. It was the open support of blasphemy, and the breach took place by an effort on the part of neutrals to force us to go on with B., as they openly stated and I personally know.

There is no such thing as members of a local church or not local in scripture, but members of Christ, a totally different idea; he speaks of foot, hand, eye, etc., you have only to read the whole passage (1 Cor. 12), and not a shadow of doubt can remain. Members are members of Christ, whatever - may mean; but it cannot have the meaning you put upon it, as it does not apply to what they were members of. But now as regards the Seven churches, they are neither the unity of the body, nor directions how to act from the Head by the apostle, but judgment by Christ on their state (I get positive directions for my conduct in 2 Timothy), Christ's judicial estimate of the whole, and what He will do if they do not repent: and this has been used to shew we are to acquiesce in things as they are - if so, with everything, and exercise no discipline at all, for none is spoken of. But it is Christ's judgment of the state of things. That is found very clearly stated elsewhere. Hence it is commonly taken, and I doubt not rightly for the history of the Church at large, to the end of Popery, and the end of Protestantism. Your use of it would go to allow all evil in an assembly, fornication, communion with idols and all else, and so it has been used.

As to "ad infinitum," it is a mere bugbear; whatever associates itself with evil, be it three or three thousand or three million, is on the same ground. If I associate myself with a principle of action, what matter how many assemblies are engaged in it, if they are so? Besides, it is a denial of the unity of the body. I know of so many assemblies, discipline in one is discipline in all, and the denial of this shews plainly enough where you have all got. This is the whole question. B. is partaker thus in the guilt in question, if another gathering is in communion with it, receive from it as it is, goes to it, they are one: if fifty do it, they are one. I cannot own them as assemblies of God as a guarantee for integrity in one coming from them. I can make a difference between misleaders and misled, and allow for ignorance, but that is not the question. I sigh over those ensnared by the unfaithfulness of others, but I find them soon corrupted in principle. I have seen none where integrity has not suffered by having to say to it. Mr. Bewley, urging reconciliation, writes a pamphlet blaming us, and told me that Mr. Craik was a decided heretic, and ought to have been put out; and when I said, Why then do you blame me for not going there when he was not put out? I do not blame you at all, he replied, and then goes on to do his best to condemn us. I sigh over ensnared ones, but I am sick of this falseness which characterises all that are in it. - says popery is all wrong, and stays in it. Episcopal and Presbyterian ministers say the state of things is all wrong, and stay in it. This is a system destructive to conscience and the habit of excusing evil is ruinous to the soul. "Holy," "True" (Rev. 3:7), I find characterises Christ in His relationship to the church He approves to the end. The whole question is, Is the church of God to maintain the truth in unity? My experience of the opposite system in the States in all shapes has made me firmer than ever in the path of what is called exclusiveness - exclusion of false doctrine and false practice, in contrast with protecting and excusing it.

Yours affectionately in the Lord.

I do not in the least confine discipline to the Table; where persons deliberately take up the loose principle, I have nothing to say to them in divine things anywhere - could not say grace at table with them, and am of course blamed for exclusiveness.