Remarks on a Tract entitled “The Intercession of Christ”, and on the second part of a paper entitled “The Three Appearings” in “Things New and Old,” for November, 1868. 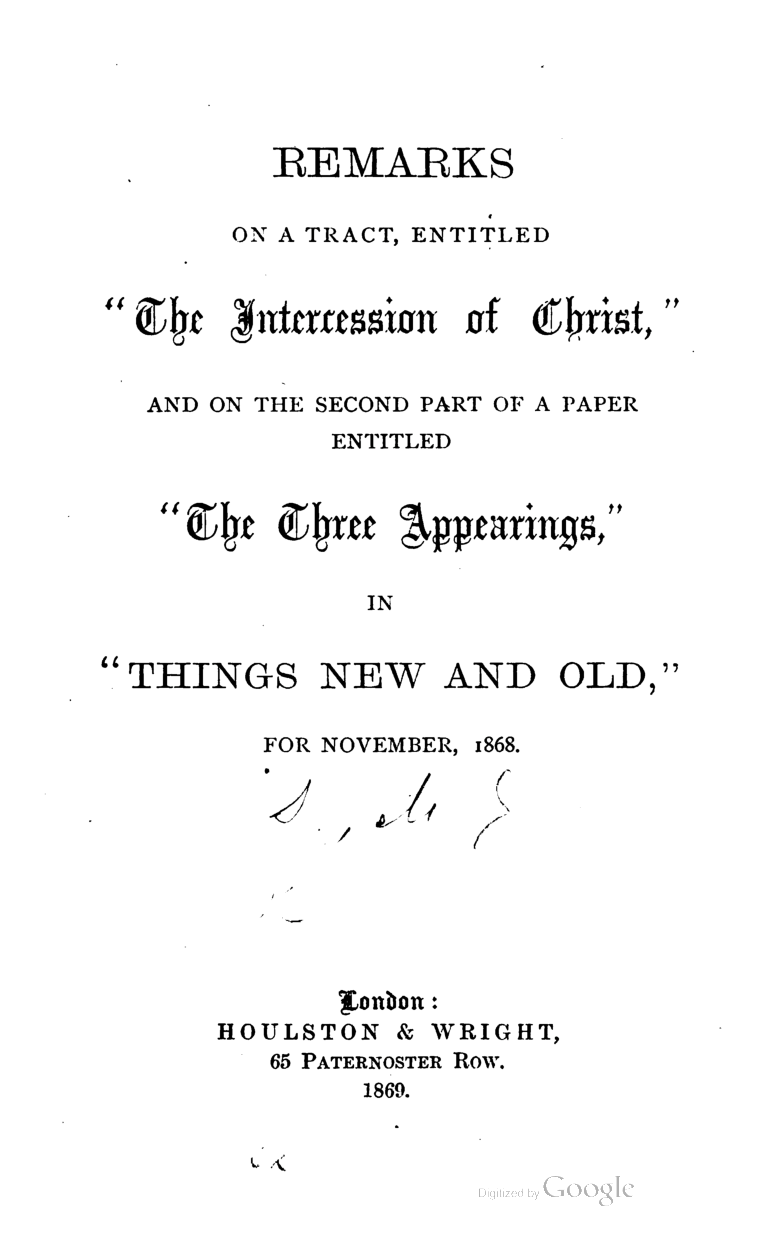 The recent edition of the Darby/Wigram correspondence confirms Matthew James Starling as the author of this pamphlet.

Matthew James Starling seems to be a pretty rare name – the only possible candidate I could find is an engraver who lived from 1805 to 1889. WikiCommons has a few engravings by him.

Starling is mentioned in Darby's Account of the Proceedings at Rawstorne Street, Part I, p. 6, and in Congleton's Reasons for leaving Rawstorne-Street Meeting, p. 10, as a member of the assembly in Rawstorne Street, London, in 1846/47.

The above pamphlet is a reply to Darby's The Intercession of Christ and was itself answered by Darby's Brief analysis of the Epistle to the Hebrews in connection with the Priesthood of Christ. Starling also wrote Four Letters on Priesthood. I wonder if he was still with the Brethren at the time of the dispute. A remark by Darby in a letter to Wigram sounds as if he was:

As regards Starling I should be anxious that a careful distinction were made between false interpretation and false doctrine. This is for me in these days important. I might refuse to go to Starling's meeting when I had done all I could to bring it right, but if there were no false doctrine as to anything that was the faith I might not have to excommunicate him, though wholly rejecting him as a doctor or a teacher. If what was taught touched the faith it is another thing. If he taught what I thought mischievous I might refuse to go there if the assembly did not stop it, but that is not excommunication.

On the other hand, Starling himself speaks pretty aloofly about Brethren in his Four Letters on Priesthood (p. 19f.):

I have so long turned from human writings to God's Word, that I am comparatively ignorant of much that is going on among brethren, both as to doctrine and practice. Some 25 or 30 years since, I learnt (from brethren) the sufficiency of God's Word for our instruction. [...] I have been looking to see by their writings what brethren hold about Melchisedec priesthood, and find they contradict themselves, and are not in accordance with the Word.

Does anybody have more information on him?