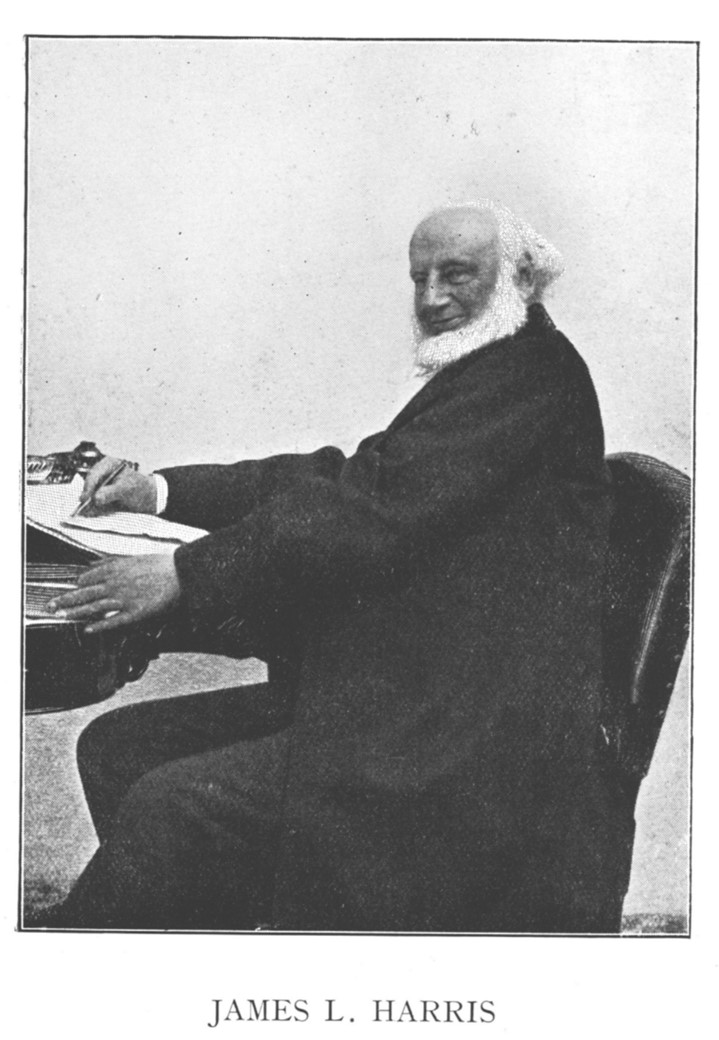 JAMES LAMPDEN HARRIS was born 13th February, 1793. He was one of a very large family, the fifth son of John Harris, of Radford, near Plymouth. After receiving his education and being duly ordained in the Church of England, he became perpetual curate of Plymstock. In 1832, through obtaining a fuller knowledge of the Scriptures, he gave up his living and associated himself with believers meeting in simplicity. His presence greatly strengthened the infant community, whose first organ, The Christian Witness, was started under his editorship in 1834. The Witness of to-day follows more on the lines of the original than any other magazine, and regularly inserts valuable papers written in these early days.

J. L. Harris was certainly one of the chief men among early brethren as to his individual and assembly connections with B.W. Newton and J.N. Darby, as to his active part in the subsequent troublous times, and as to his writings, which fortunately remain when the sorrows are gone and continue to breathe the fragrance of the spirit of Christ possessed by their author.

For many years J. L. Harris held weekly Bible readings at Plymouth which were well attended by all classes. He was a good scholar, and had a large Hebrew Bible from which he used to translate freely. His opinion on difficult portions of the Word was frequently asked for and valued by leading students and others.

In the troubles of 1847 and succeeding years Mr. Harris was one of the leaders involved. A manuscript, purporting to be the notes of a lecture by Newton on the Sixth Psalm, lent to Mrs. J. L. Harris, was the start of the Newton Controversy, which has caused more discussion, used up more printers' ink, and with its assertions and withdrawals, reassertions and explanations, is more difficult to comprehend to-day than any other subject or dispute connected with the Brethren movement. Happily generations have come and gone, and "What saith the Scriptures ?" (Rom. 4. 3) is becoming more and more the only "question" at issue.

Mr. Harris was one of the barriers to the strong inclinations toward clericalism in Plymouth. A settled order of ministry had prevailed at Plymouth, Mr. Newton and Mr. Harris ministering alternately. People "knew when it was Newton's day and when it was Harris' day, and took
their measures for going accordingly."

In view of the developments since 1840, without endorsing the remark, the following by Dr. TREGELLES, then happily with them, is interesting. "Mr. Darby requested Mr. Newton to sit where he could conveniently take the oversight of ministry, and that he would hinder that which was manifestly unprofitable and unedifying," and that on "one occasion Mr. Newton had in the assembly to stop ministry which was manifestly improper, with Mr. Darby and Mr. Wigram's presence and full concurrence."

As suggested, J. L. H. was a prolific writer, and his books "On Worship," "Law and Grace," "Precious Truth," "The Priesthood and the Cross of Christ," among others, are most valuable. He was a deep prophetic student, and took a leading part in the meeting held in the Freemasons' Hall, London, in May, 1864.

As his second wife, Mr. Harris married the daughter of the celebrated Legh Richmond, author of "The Dairyman's Daughter," which has been signally owned of God. They lived at Plymstock for many years, then at Plympton, and then removed to Weston-super-Mare at the earnest entreaty of his old friend, Captain PERCY HALL. Here he died on 9th October, 1877, leaving behind a name which will be revered as long as his writings are read.