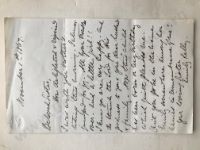 George Barela said ...
D
Are there any references to B.W. Newton in Mr Kelly's ministry?
Sunday, Sep 19, 2021 : 01:09
Syd said ...
Hi George. Hardly, I think, but in one paper of Kelly's: "The Doctrine of Christ and Bethesdaism," the heresy of BWN is specifically noted. It can be found on the STEM website.
Sunday, Sep 19, 2021 : 04:01
Greg said ...
Fascinating. I had never previously thought to consider this--but what Syd says is accurate. WK makes numerous references to Isaac Newton, somewhere mentions John Newton, but very rarely BWN. The editions of his notes on the gospels compiled with copious footnotes by EE Whitfield often refer to BWN--but this was Whitfield not Kelly.

In stark contrast, in WK's letters he makes heaps of references to BWN and his followers. He certainly knew how to be cutting with his pen--but it appears that in this particular case he took care not to air dirty laundry.
Sunday, Sep 19, 2021 : 13:15
Martin Arhelger said ...

Kelly mentions B. W. Newton several times - not only in his private letters but also in printed book, pamphlets and his Magazine (The Bible Treasury). It is not enough to search for “Newton” because Kelly often used “B. W. N.” or “Mr. N.”. In other cases he does not name B. W. Newton explicitly but obviously referred to him.

1890 and later Kelly showed several times that some of the new teachings of F. E. Raven were as bad (or even worse) than those of B. W. Newton.