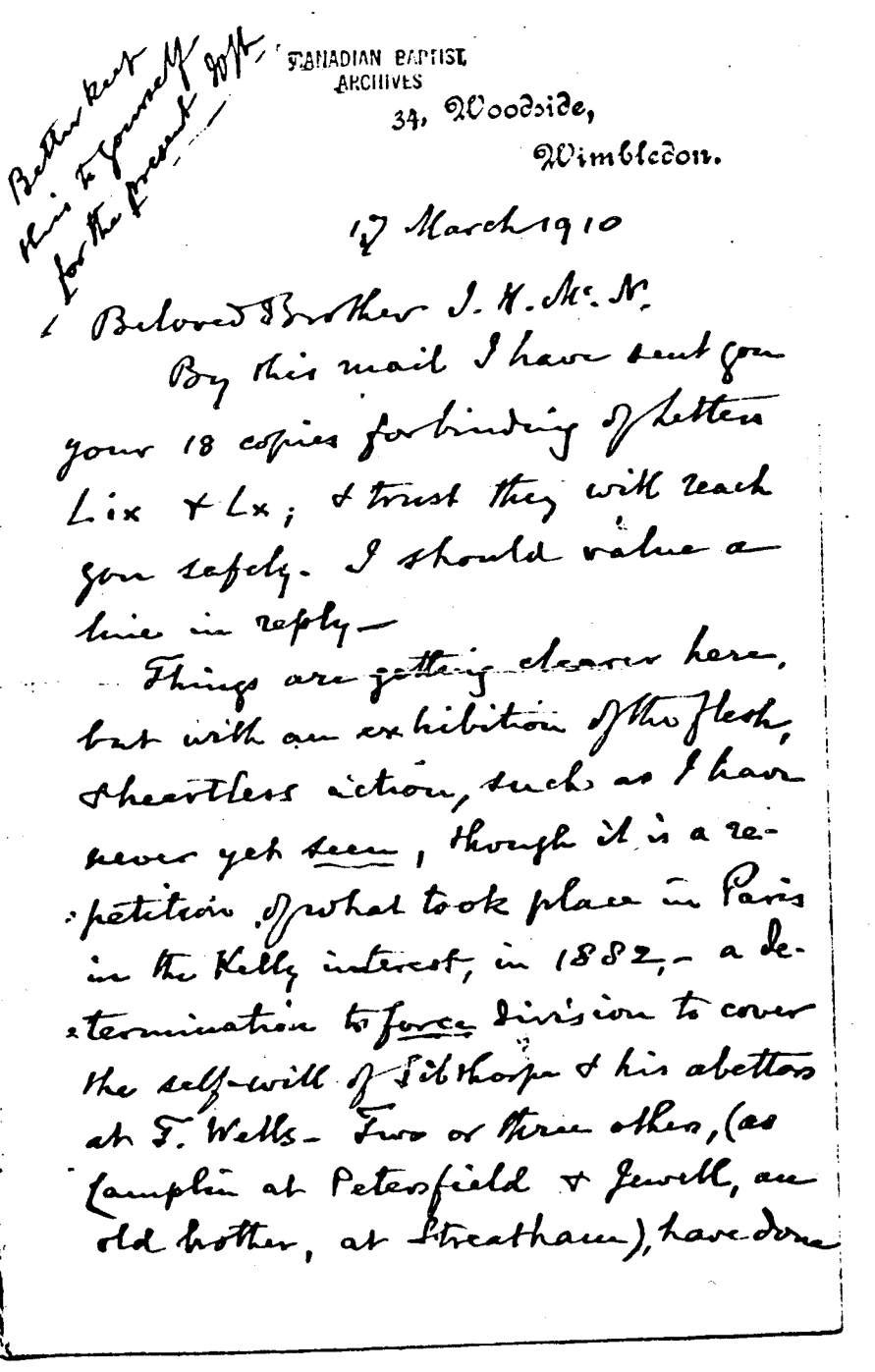 Better to keep
this to yourself
for the present WJL

By this mail I have sent you
your 18 copies for binding of letters
Lix & Lx;  & trust they will reach
you safely. I should value a
line in reply —

Things are getting clearer here,
but with an exhibition of the flesh,
& heartless action, such as I have
never yet seen, though it is a re-
petition of what took place in Paris
in the Kelly interest, in 1882, – a de-
termination to force division to cover
the self-will of Sibthorpe & his abettors
at T. Wells. Two or three others, (as
Camplin[?] at Petersfield & Jewell, an
old brother, at Streatham), have done

exactly the same thing: "L'empire
c'est moi", & if anybody remonstrates,
he is at liberty to walk out!  It only
shows the hollowness of our profession
to be gathered to the Lord; so, no wonder
the Lord will not let it pass.  Everything
that could be done, has been done to
induce T. Wells to reconsider their evil
ways – But they will listen to nobody.
And a few prominent ones for some
years past having acted on the same
arbitrary lines, they have found courage
to pursue their course to the bitter end.
Captn Barton supports it secretly & P. A.
Humphery openly.  But many of the
generation which follows us have been
reading the word for themselves & are really
getting on. So there is much to be thankful
for.  Of course every kind of calumny is
in the air & we all get our share of it; but
The Lord is our resource, & we need not pay
attention to what people say, except to

judge ourselves & see that we do not give
occasion for what they say.  Alfred Burton
has caused offence because his tracts, which
are written against the awful ecclesiasti-
cal corruption which has been sapping
the life of the brethren, are not sufficiently
guarded on the other side.  He is Irish in
this respect, but he is careful, not to
make trouble, & really respectful for
the consciences of those who seek to
follow the Lord.  Dunlop judged rightly
of what he saw at T. Wells when he was
there, but he does not know the kind of
oppression which the personal quarrel
grew into, nor the influence of money
behind it.  [G.W.] Upson [of Ilford] of course has gone
with it; after having at first testified
against it, he turned completely round.
Always full of himself he was a trial in
any reading meeting.  One of two families
have gone with him making about a dozen
in all, but the mass of the Ilford meeting
remain faithful and are going on happily.

James Carter, the publisher, has been
bought over by Sibthorpe who has plenty
of money; so Alfred Burton has had to
give him up & do the best he can for
a central depot at Paternoster Row. It
is very hard to know what to do or where
to go.  [Alfred] Holness is the best of the publishers
as far as the truth goes & of no particular
shade, but of course those who do not
know would make capital out of his
name appearing on Burton's "Echoes"
or "Christian Library" — For a month
or two Heath of Leicester who is a really
faithful man will do what he can on
the new lines.

But I must close. I trust there
is some breaking with the Hayhoe's
I have heard nothing of late.

Yours in haste, beloved brother
We must look to the Lord & be strong
in Him & the power of His might.
May He have mercy upon us