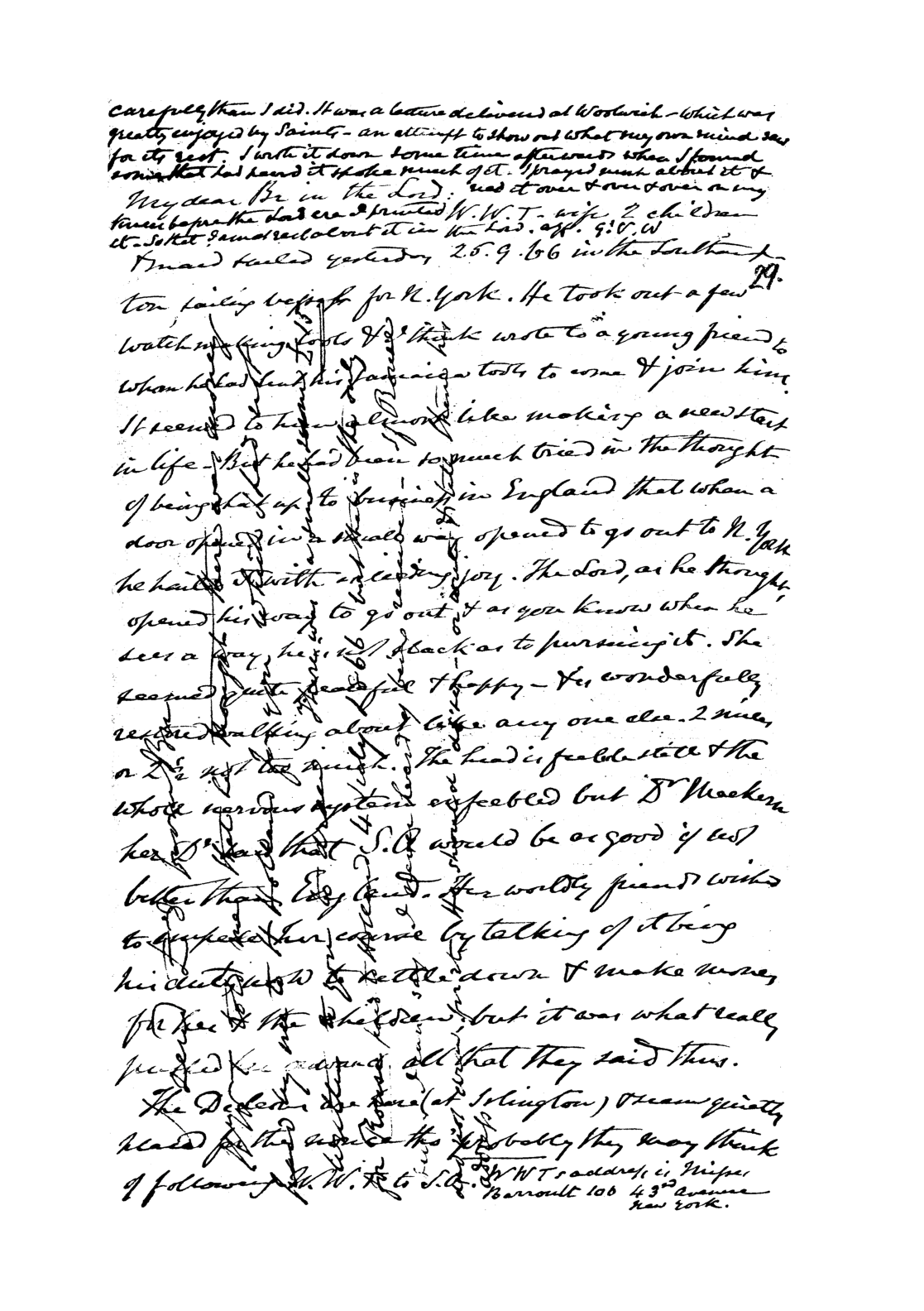 My dear Br in the Lord:

The Lord permits us to be in the sieve. Surely He is not far off & surely trial is a token of His love to those who pass thro’ it with Himself. A most violent attack by U. Guinand of Lausanne, which as a repetition of what we all had judged surprized us not came first. Then Mr Dorman withdrew from the table at Bristol – and next published a tract explaining his doing so – because, as he says, J.N.D. was as bad as Mr Newton in doctrine & the path of brethren was too narrow for him W.H.D – has {?} taken up independency afresh as his ecclesiastical position – In the close of his book (the appendix) I am honorably mentioned as being as bad as J.N.D. Next Mr Hall did likewise withdrawing himself & writing a book against (I cannot say whom or what for I cannot get it) – Two others Gilpin & Haffner seem to have identified themselves with the same course in measure. Gilpin does not withdraw & says he will not – Haffner has not as yet.

To any one who reads the life of Paul these things are seen as land marks for the road; mile stones or sign posts marking the Kings high way. And, therefore, they become to faith testimonies to the truth of the road which one is upon. This, of course, in no wise hinders the sorrow unfeigned which such doings produce upon a godly soul – nor the trial which Satan, as permitted of the Lord thus brings upon the flock. No one is surprized as to Mr Halls acts – for for 20 yrs his irritation against J.N.D has been patent to us all & his opposition to the Oneness of the Assembly has been known & borne with for 35 years. Still my heart bleeds when an old companion in arms like A. Stewart or P F. Hall after giving all up for the sake of the Lord Jesus Christ turns in old age aside to vanity – And I would not have it otherwise. The Lord wept over jerusalem – paul wept over those that went not with him to the end – & so would I. The feeling too is heart-searching to oneself. – “Shall I also leave the Lord, cease to follow Him to the end who laid his life down for me?” Truly “Keep me & I shall be kept” is pretty much my only answer for I am nothing in myself or in my circumstances on which I can lean. His grace is sufficient His strength is made perfect in weakness – may I know my weakness & use the knowledge of it to make me cleave the closer to Him. No one had a thought of such a course as to Mr Dorman save perhaps one but he has long said the world I fear is so in his spirit that unless the Lord come in to save there will be sorrow & that of us {?} private nature.

Well if one is in the war it is well to look up from it to Heaven & to Christ in His own eternity there at God’s right hand. And while I would draw the thong of my own girdle up a hole or two, I feel it happy to say: “Pray for the Lord Jesus Christs name to be magnified in us” – and to say it to those who far off or near I believe care for Christ.

Happily for myself, the attack, as it was meant on my writing, is upon a foundation point of my faith; held such for 28 years & not questioned now – viz the Cry of our Lord on the cross “My God, My God why hast thou forsaken me”. I know not whether I can put my view before you but I will try.

{…} This is accused of being ‘a figment of the human mind’, – ‘disgusting’, – ‘shameful’, – ‘making of the cross of none effect’. I do not suppose that there may not be statements of mine {?} to be corrected in the paper referred to in the T.P.T Ps XXII. very likely there are, though I am not conscious of any – nor if I were doing once again the work could I do it more

I've tried to reproduce spelling and punctuation as accurately as possible. Words I'm not sure about are followed by {?}, words I can't decipher at all are marked by _____. Corrections and improvements are most welcome (as well as a transcription of the rest of the letter, of course).

Thanks a lot, Timothy! I don't know how I came up with A – it definitely looks like a U! Corrected.

I wonder if you could perhaps help me with the following tough nut: