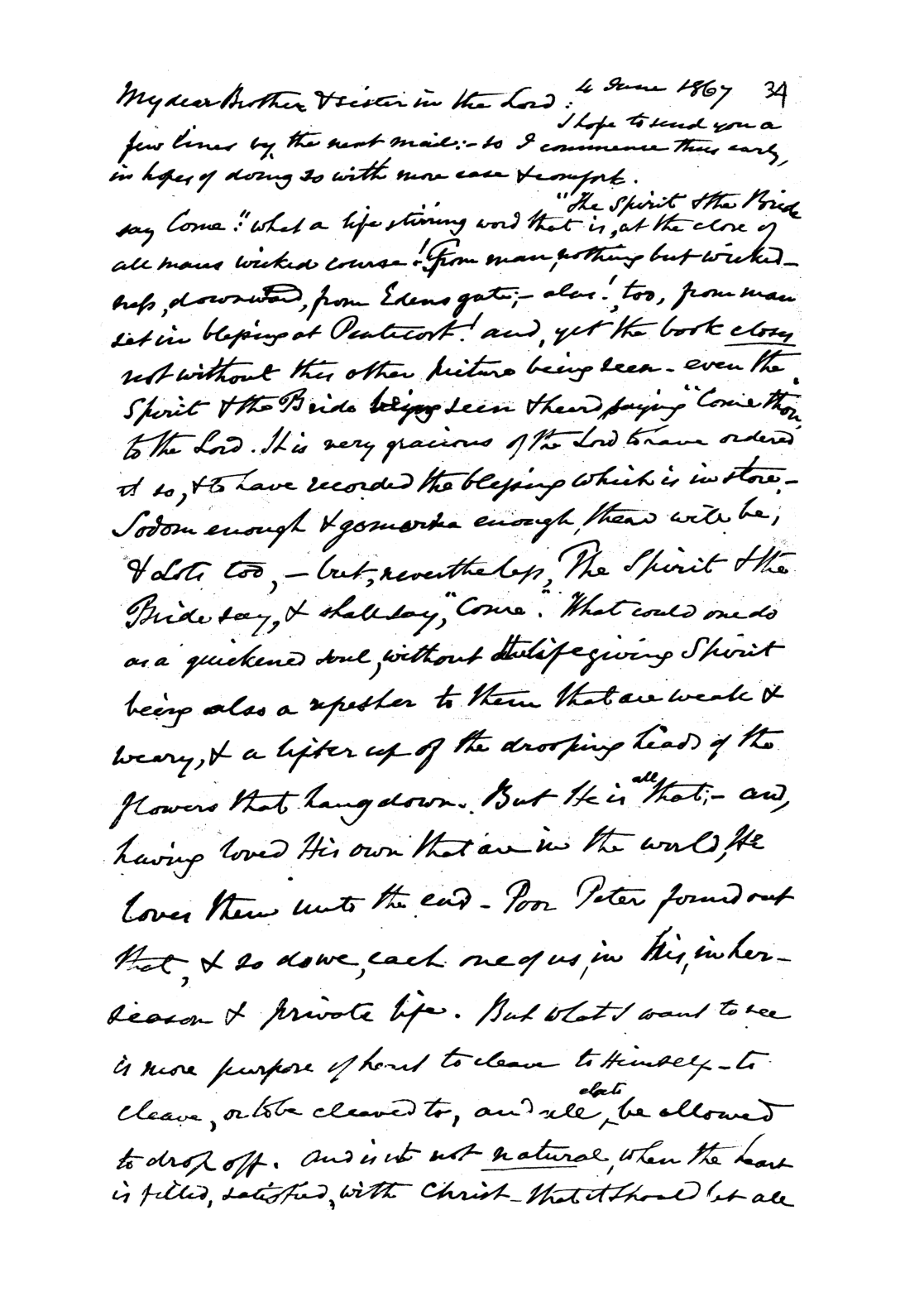 My dear Brother & sister in the Lord:

I hope to send you a few lines by the next mail: – so I commence these early, in hopes of doing so with more care & comfort.

"The Spirit & the Bride say Come": what a life stirring word that is, at the close of all mans wicked course! From man, nothing but wickedness, downward, from Edens gate; – alas!, too, from man let in blessing at Pentecost! and, yet the book closes not without this other picture being seen – even the Spirit & the Bride being seen & heard saying "Come thou", to the Lord. It is very gracious of the Lord to have ordered it so, & to have recorded the blessing which is in store, – Sodom enough & gomorha [sic] enough, there will be, & Lots too, – but, nevertheless, The Spirit & the Bride say, & shall say, "Come." What could one do as a quickened soul, without the lifegiving Spirit being also a refresher to them that are weak & weary, & a lifter up of the drooping heads of the flowers that hang down. But He is all that; – and, having loved His own that are in the world, He loves them unto the end – Poor Peter found out that, & so do we, each one of us, in his, in her – season & private life. But what I want to see is more purpose of heart to cleave to Himself – to cleave, or to be cleaved to, and all else to {?} be allowed to drop off. And is it not natural, when the heart is filled, satisfied, with Christ – that it should let all others pass on around it, – satisfied to have formed its own own rest in Him the beloved. Surely, until the soul has done so, it cannot rightly occupy itself with others. If any man thirst, let him come unto me & drink – & out of his belly shall there flow rivers of living waters: life giving to others they are, & soul reviving to those of the Lords who come in contact with that which the soul, having [???] as received at Christs hand, passes on to others. Surely Peter, James, & john, on the day of Pentecost were specimens of this: the spirit injoyed by them in the word of Christ, they, out of the abundance of the heart, spake it out – and others heard &, the spirit using the word, these, too, felt the preciousness of the word and of its divine power.

Here, I think, all is pretty clear & quiet – poor Mr Hall, Mr Dorman &c have so identified themselves with the neutrals (as they are called) neutrality between God & Satan sounds {?} awkwardly {?} that we (as they call us) the discipliners {?} = Bn, have not, now, much trouble: the Lord, too, is winnowing out brands from among them to Himself. Mr Snell and, now, Mr Turpin are men who have had to leave all to follow Christ, & from the neutral territory: – they have done it, apparently, as whole heartedly as it has been in whole loss of every thing. But Christ is worthy, I am sure, of more than the all; & the all is, what? after all is said & counted.

Timothy Stunt said ...
In line 2-3 of the transcript, "neutrality between God & Satan" is followed by two missing words which, I think, are probably "sounds awkward". In the following line I suspect that "winning" should read "winnowing". Timothy Stunt
Friday, Jul 10, 2020 : 01:13
Michael Schneider said ...

Thanks again for your eagle-eyed observations, Timothy!

"sounds awkward" makes a lot of sense, but isn't there something behind the final "d"?

Do you have a better suggestion for the odd "discipline = Bn"? Apparently this is supposed to be a name the Open Brethren gave to the Exclusives?!

The last two words in the above excerpt really vex me because of the cross-writing:

Without the cross-writing it could be something like this: