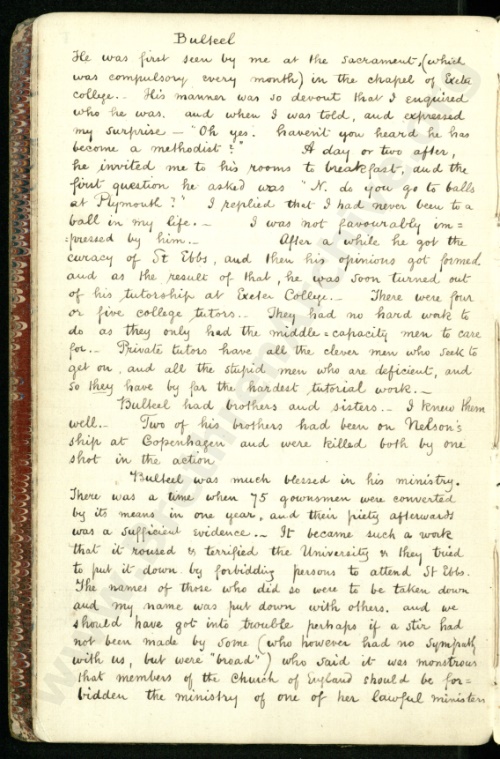 He was first seen by me at the sacrament (which was compulsory every month) in the chapel of Exeter College. His manner was so devout, that I enquired who he was, and when I was told, and expressed my surprise---Oh yes, haven't you heard, he has become a Methodist?" A day or two after, he invited me to his rooms to breakfast, and the first question he asked was, "N., do you go to balls at Plymouth?" I replied that I had never been to a ball in my life. I was not favourably impressed by him. After a while, he got the curacy at St. Ebbs, and then his opinions got formed, and as the result of that, he was soon turned out of his tutorship at Exeter College. There were four or five college tutors. They had no hard work to do as they only had the middle capacity men to care for. Private tutors have all the clever men who seek to get on, and all the stupid men who are deficient, and so they have by far the hardest tutorial work.

Bulteel was much blessed in his ministry. There was a time when 75 gownsmen were converted by its means in one year, and their piety afterwards was a sufficient evidence. It became such a work, that it roused and terrified the University and they tried to put it down by forbidding persons to attend St. Ebbs. The names of those who did so were to be taken down, and my name was put down with others, and we should have got into trouble perhaps if a stir had not been made by some (who however had no sympathy with us, but were "broad"), who said it was monstrous that members of the Church of England, should be forbidden the ministry of one of her lawful ministers.