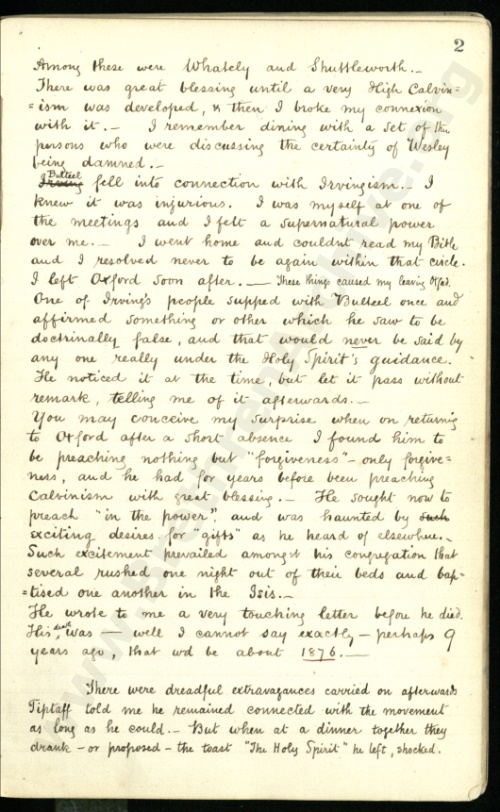 Among these were [Richard] Whately and [Philip] Shuttleworth. There was great blessing until a very High Calvinism was developed, and then I broke my connection with it. I remember dining with a set of the persons who were discussing the certainty of [John] Wesley being damned.

Bulteel fell into connection with Irvingism. I knew it was injurious. I was myself at one of the meetings, and I felt a supernatural power over me. I went home and couldn't read my Bible and I resolved never to be again within that circle. I left Oxford soon after. These things caused my leaving Oxford. One of Irving's people supped with Bulteel once and affirmed something or other which he saw to be doctrinally false, and that would never be said by any one really under the Holy Spirit's guidance. He noticed it at the time, but let it pass without remark, telling me of it afterwards.

You may conceive my surprise when on returning to Oxford after a short absence, I found him to be preaching nothing but "forgiveness----only forgiveness, and he had for years before, been preaching Calvinism with great blessing. He sought now to preach "in the power" and was haunted by such exciting desires for "gifts" as he heard of elsewhere. Such excitement prevailed amongst his congregation, that several rushed one night out of their beds and baptised one another in the Isis [River]. He wrote to me a very touching letter before he died. His death was----well I cannot say exactly----perhaps 9 years ago, that would be about 1876.

There were dreadful extravagances carried on afterwards. [William] Tiptaff  told me he remained connected with the movement as long as he could. But when at a dinner together, they drank, or proposed the toast [to] "The Holy Spirit", he left, shocked.

Marty said ...
Added first names and some punctuation.
Tuesday, Sep 25, 2018 : 07:50
Tom said ...
Thanks again for doing those Marty - just to clarify as it wasn't obvious to me at first, your comment means you have inserted relevant punctuation and first names into the transcript that are not in the original - which is very helpful too, thx.
Tuesday, Sep 25, 2018 : 18:51