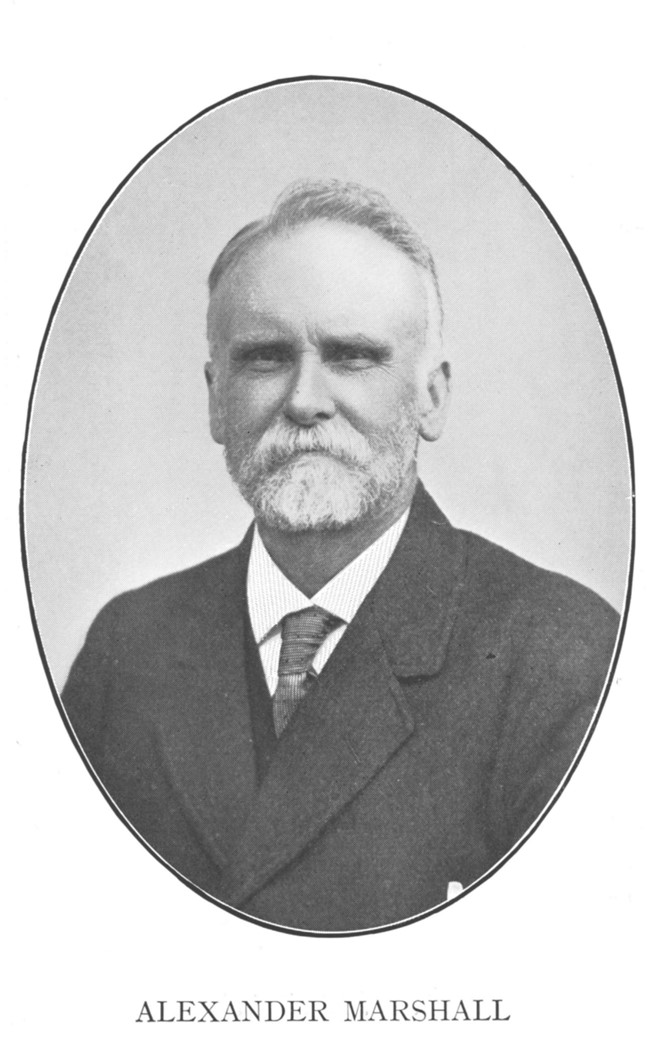 ALEX. MARSHALL was born in the town of Stranraer, Wigtownshire, a county rich in Covenanting traditions and in memories of revival blessing. His father, who carried on business as a clothier, was known as "Holy Marshall." He was an elder in the Evangelical Union Church, a church which at that time was not only evangelical, but evangelistic. His mother was an eminently devoted and godly woman, and Alexander had the inestimable advantage of a godly upbringing and Christian example.

He left home at the age of eighteen to fill a situation in the warehouse of Arthur & Company, Glasgow, and it was two years after that before the choice was made which changed the course of his life. These two years were years of dissatisfaction and of endeavour to stifle the strivings of the Spirit, during which he was never free from anxiety about his soul. Entering a circus in Ingram Street, where Gordon Forlong was preaching, he heard two great truths: (1) "The blood secures;" (2) "The Word assures;" and believing them, entered into rest.

Early in his Christian life he was brought into contact with a number of earnest Christians, who were gathering in New Testament simplicity to carry out the Lord's commands, and Mr. Marshall, convinced of the Scriptural character of their mode of meeting, joined himself to the disciples. His passion to win souls was such that, after the day's business was over, he gave his evenings to preaching. In church, or chapel, or in the open air, wherever there was an open door, he delighted to tell out the good news, often travelling long distances to accomplish this. During the first memorable Moody and Sankey campaign he did valuable work in the inquiry room and at after meetings.

At length the strain of doing double duty began to tell, and he was forced to choose between continuing a business career or giving himself wholly to the work of the Gospel. This choice was made, not without considerable exercise and searching of heart. A tempting offer to join a Christian friend in business, and pressure from his friends to take up the ministry in the E.U. Church, were some of the things on which he turned his back.

In the year 1876, at a meeting in Union Hall, Glasgow, he was commended to the Lord for the work of the Gospel. Then followed active campaigns in many cities and towns of Scotland and England in which the Word was singularly blessed, and great numbers led to the Saviour. In the year 1879, moved by the need of Canada, he went out to the province of Ontario. Here God owned his service in a remarkable way; many, who afterwards were ardent soul-winners, being led to the Lord at that time.

After his marriage to Miss Tate, in 1882, they settled first in Toronto, then in Orillia, and threw themselves into the work, with the result that many companies of Christians began to gather on New Testament lines, and continue to be a witness for God to-day. Altogether seven years were spent in this district, then followed visits to the Pacific Coast, to the United States, and finally back to Scotland. Years of unceasing toil in tents and theatres and halls began to leave their mark, and in 1896 his health broke down, and insomnia forced him to restrict his activities. A visit to New Zealand and then to California in search of restored health followed, and after a prolonged sojourn abroad, he returned to this country in 1904, ultimately making his home in Glasgow, then in Prestwick, Ayrshire.

But the urge of the Gospel was ever present. Visits to the Faroe Isles, to Barbados, to Norway, to Switzerland, to Russia, and frequently to Canada and the United States, were interspersed with active campaigns in Scotland and England. At the age of 71, in the darkest days of the war, he was in France succouring the soldiers and telling them of a Saviour's love. When the war was over and the Bolshevist horrors in Russia followed, he did much both in this country and in Eshtonia to get succour and the news of salvation to the sufferers.

Mr. Marshall's pen was as active as his lips. He was an indefatigable tract writer. His booklet, "God's Way of Salvation," has been translated into many languages, has been circulated by millions, and has been, under God, the means of salvation to very many. Messages from his pen have gone into all parts of the world, and many in that day will call him blessed who have, by means of his written ministry, been led into life.

When in Toronto he opened a book store, and his interest in the circulation of Gospel books was in keeping with his preaching and writing. He was the greatest tract distributer I ever knew. His pockets always bulged with Gospel booklets, and his message in season was always ready. During the last few years of restricted preaching activity, from the sanctuary of Redcroft he continued to send out the soul-saving message, and when no longer able to carry the tracts to the people, he kept others supplied in order that the work might go on. He never ceased to be an evangelist, and will always be remembered for his clear and Scriptural presentation of the work of Christ as the Propitiation for the sins of the whole world, and for his large-hearted love for all the Lord's people. A man of great transparency of character, of simple and unaffected faith, he was most like his Master, in that "He gave." He found his greatest pleasure in giving, whether it was a large part of his income, and how much that was only the Lord and those to whom he sent it knew, or a Gospel tract; all were given with the same cheerfulness and with the same ready mind.

He had attained the ripe age of 81 years, over sixty of which were spent in devoted and unstinted service for the Lord Jesus Christ. His Gospel activities only ceased when his life ended, for before the last message of mercy, made up by his own hands, and despatched by post, could reach their destination, the ambassador had been recalled, and was at Home with the Lord. His last day on earth was spent in dispensing the Lord's bounty, and in sending messages of cheer and encouragement to fellow-labourers in the Gospel, then followed a few hours of restlessness and suffering, after which the earthly course was ended on 9th August, 1928.

Phil said ...
I throughly enjoyed “Holding Fast The Faithful Word”. His life reflects a reaching out in what ever way possible to come alone side anyone who would connect with him so that he could present the gospel of our Lord Jesus Christ as the early christians did in the beginnings of the brethren movement.
Wednesday, Mar 27, 2019 : 10:19
Marty said ...

Fallen Asleep in Christ::  At Prestwick, Scotland, on August 9th, 1928, Mr. Alex. Marshall, aged 81. He was saved through the preaching of the late Mr. Gordon Forlong in 1865, soon after began himself to preach, and from 1876 he gave his whole time to the gospel in many lands. He has been one of the greatest of soulwinners, his tracts have been issued in millions, and his booklet, "God's Way of Salvation" has had the huge circulation of more than five millions in some twelve languages. He was in harness to the close, spent the last three days making up packages of papers for posting, retired to rest at 8 p.m., had a sharp heart attack at midnight, and was present with the Lord whom he had served so faithfully in the gospel for 63 years.  "The Treasury" 1928.