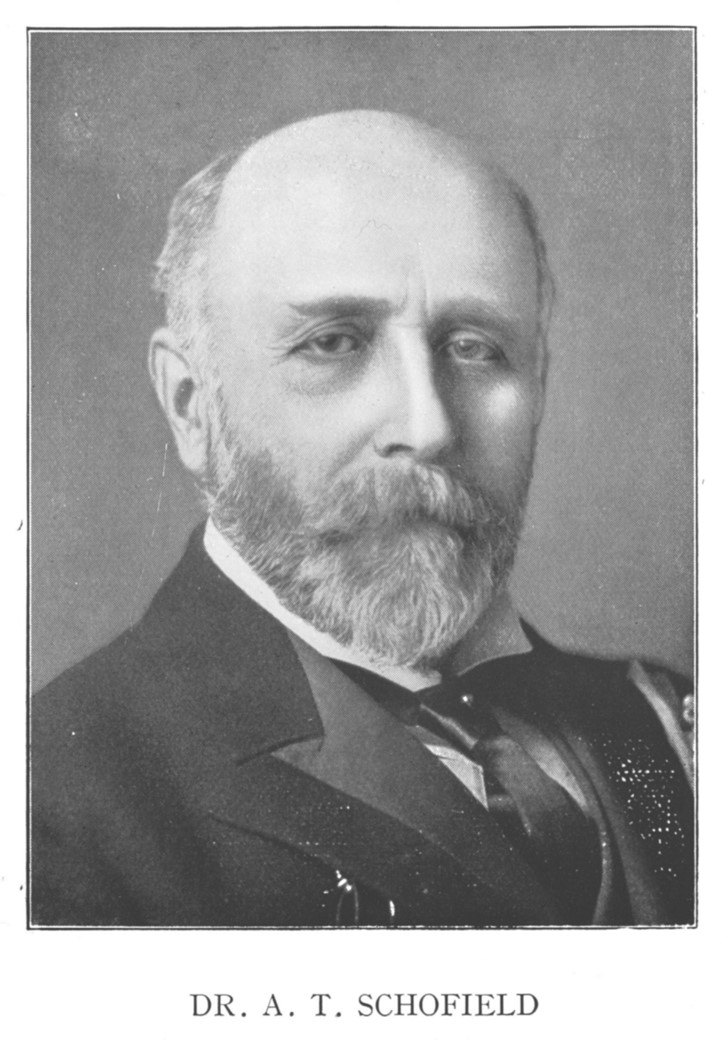 ALFRED T. SCHOFIELD, M.D., L.R.C.P., Lond. M.R.C.S., Eng.; F.R.G.S., etc., a distinguished Harley Street Physician, an author of considerable repute, editor of various magazines, and one of the best known Christian workers in London, was born in Rochdale, in 1846, in Schofield Hall, dating from Jacobean days, and was connected with quite a number of distinguished families in the district. Like many old families, the fortunes had varied, and when the child was four his parents moved to London. His father had some interest in the building of the Crystal Palace at Sydenham. As a youth, A. T. Schofield remembered the first great Exhibition of 1851, the Great Eastern visiting the Thames, the fanciful dress of Lord Dundreary, the visit of Napoleon III with the Empress Eugenie, and of Lord Palmerston to the Palace.

His first school-days were in the home of ARTHUR PRIDHAM, a well-known author of expository volumes, in Devonshire, afterwards in various other schools and colleges.

At the age of 14, when entering a Private Academy at Ryde, I.W., he had a remarkable and sudden conversion. At 15 he spent the early hours, from 4 to 8 a.m., of many days learning Greek, an invaluable asset to him in after days.

His first business training was under the eye of an uncle in Rochdale, where he started a Sunday School, and had many escapades. At this time he met in Ireland a young lady, who became his wife in 1871, the wedding being attended by G. V. WIGRAM. After a time, with his wife and family, he felt "the call of the Metropolis," settling in a home at 7 Wood Street, and commenced business, we understand, in the dry goods line. At first successful, later business went down, and he was left wondering what to do. A still small voice whispered, "Be a doctor, " a not too easy task at his age, yet he decided on a medical career, and after much study and perseverance passed the two college examinations.

After leaving the London Hospital, the Doctor served as a locum in Yorkshire, then settled down to a practice in Westbourne Terrace. He made a bad, but long to be remembered, start in this house by throwing two crumpled £20 notes into the fire, and not having the numbers, suffered the loss. He conducted a large ambulance class in Paddington Baths, where he had audiences of 1000 at his health lectures. Hundreds of these helpful lectures were given during his lifetime.

His travels were fairly extensive. In addition to several tours of France, Switzerland, Germany, Austria, and other parts of the Continent, he attended the British Medical Association Meeting in Toronto, in 1906; went to Palestine in 1904 for the World's Sunday School Convention, then made another extended tour in 1911, gathering information which forms the basis of "Where He Dwelt, " "Journeys of Jesus Christ, " and others of his books. This tour included Egypt, where he found a solution to the Riddle of the Sphinx. These two journeys led the Dr. to engage in the preparation of "Palestine in London," or Palestine Exhibitions, several of which have now been held. The first resulted in a profit of £12,000, not for himself, but for a good cause.

From his conversion at the age of 14, until his Home-call at the age of 83, he was one of the most active leaders in various branches of Christian work. In regular fellowship with those called "brethren" (first with "Darby, " then with "Kelly, " then for years with "Open") the largeness of his heart and the breadth of his sympathies reached out to all honest efforts for the extension of the Kingdom of the Lord whom he loved. Even "peculiar cults" and "unorthodox workers" were of interest to him, as to what they really aimed at. Yet he never yielded one atom of loyalty to the Fundamentals of the Christian Faith.

When a comparatively young man he started a Sunday School in Rochdale, in one sense not a Sunday School, for then 1 person out of 3 attended these schools, which consisted of those who came as infants, grew up, married, and continued their attendance. His school numbered 500 scholars and 50 teachers, including a good choir, for Lancashire people are musical. This school was visited more than once by Dr. DAVIS, "the good black doctor," of whom the Dr. wrote a most interesting story. Visiting the district 40 years after, the former scholars, many of them now grandparents, packed the old schoolhouse for a happy night of remembrance.

He was one of the 6 founders of the "Mission to Deep Sea Fishermen" which has done such wonderful work— spiritually, morally, and physically—for these hardy sons of toil. In early days in London he took quite an interest held in the well-known Eccleston Hall, Victoria. He was a valued helper in the Great Missions of Moody and Sankey in the Albert Hall and other places; also in the missions of Torrey and Alexander. He was a member of the Prophecy Investigation Society and the Victoria Institute, as well as other societies, and a Fellow of the Royal Geographical Society.

When over 80, he made an extended preaching tour right up through England into Scotland, then afterwards turning westward through Wales and West of England. His Bible Lectures and Gospel Addresses on this his last tour were much blessed to all who heard them. Both in local and public halls large crowds gathered.

His closing years were spent in helping in local work in Ryde, where he had settled after his retirement and in the South of England, with regular visits to London for special lectures or meetings. Long troubled with his heart, another trouble entirely caused his decease on April 20th, 1929, at the ripe age of 83. Austere and aristocratic in his bearing, many felt a difficulty in approaching him, yet we knew no more kindly man or sociable friend in his own home or in ours. He was indeed to all who knew him "a beloved physician, " whose place in Christian work and literature will long remain unfilled.