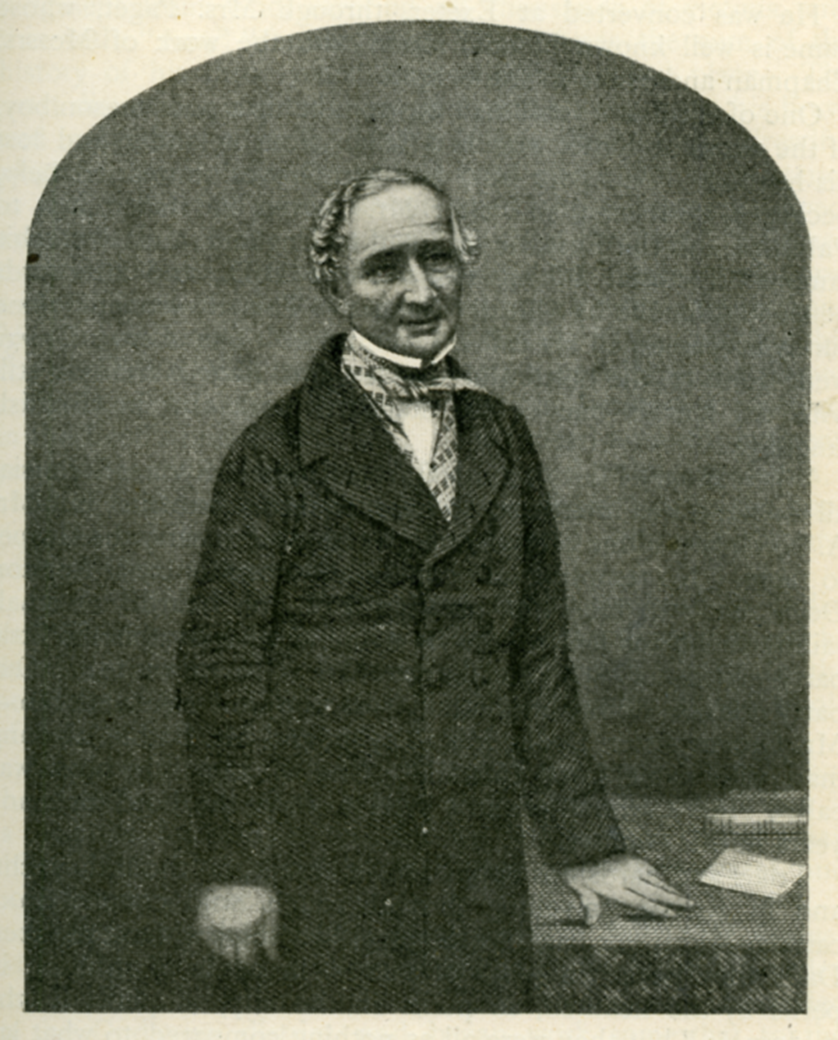 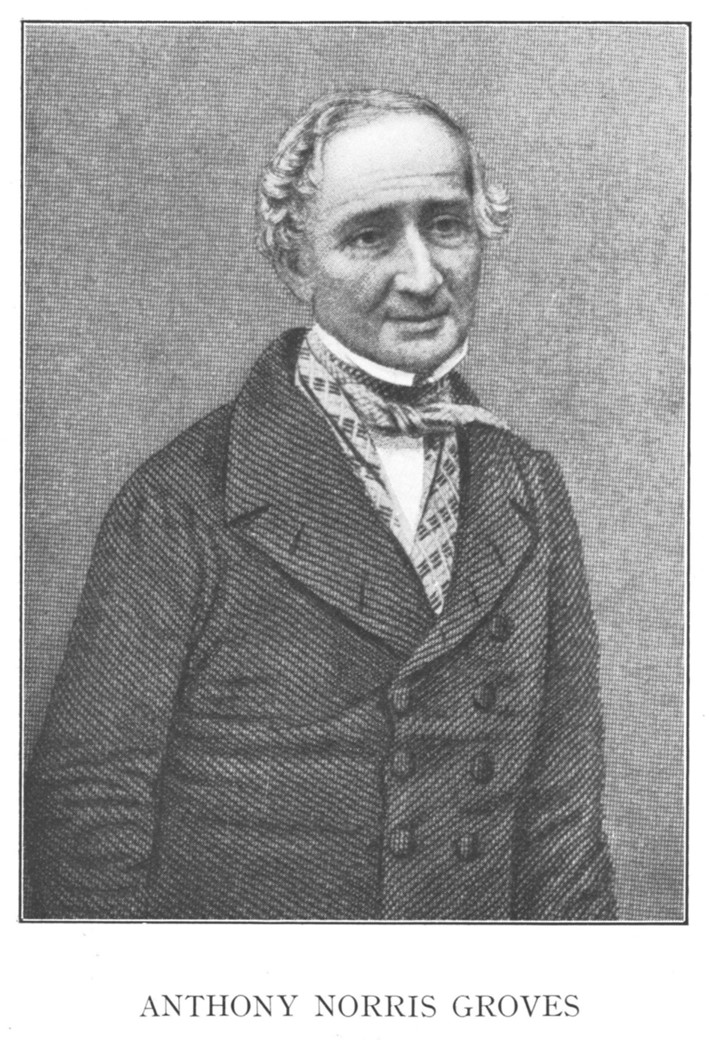 ANTHONY NORRIS GROVES was born at Newton, in Hants, in 1795. His father seems to have been a well-to-do and generous man, only a little venturesome in his undertakings, for, besides being part owner of the famous ship “Royal George” that went down “with twice three hundred men,” he laid out a fortune in draining land near the sea, which ended in nothing but heavy loss. A factory for refining salt was more successful for a time, but that, too, proved a failure, through a servant revealing the secret of the process to others.

It is not to be wondered, then, that Mr. A. N. Groves took after his father, and was fond of bold and daring enterprise, only not in the way of “loving his life” and amassing money, but rather in throwing his life and his money away—as it appeared to many.

He was converted at Exeter, through Miss Paget, whose name is well known in connection with the work of Messrs. Chapman and Hake at Barnstaple. As a dentist he had a practice worth £1000 a year, which he relinquished to go out as a missionary.

One of his first “ventures” was to take up a poor mason boy of the name of Kitto, who had fallen from a ladder and lost his hearing. This poor boy, with Mr. Groves’ unwearied help, became well known, and after Mr. Groves had taken him to Palestine and the East, he returned to England and wrote his famous “Kitto’ s Pictorial Bible,” was made a D. D., and afterwards pensioned for life by Queen Victoria. This investment alone surely surpassed all his father’s ventures.

When Henry Martyn crossed from India to Syria, via Persia, all England was interested to hear of those countries, but Mr. A. N. Groves alone prepared to give himself to carry the Gospel to them. No tempting and comfortable steamer lay at London Dock ready to take him and his family on board. A small sailing yacht was lent to him by a friend, and in this the little party sailed for St. Petersburg. Mrs. Groves wrote: “Our party consists of our little family—two boys of nine and ten—Mr. Groves’ sister Lydia, Miss Taylor, and Mr. Bathie, a young man who came from Ireland.” One of the little boys was called Henry, who afterwards lived to serve the Lord for many years in this country.

Trials and hardships abounded, of course, on the little yacht, and in Russia, travelling through rough, wild country in a carriage with their bag and baggage, hardships without number. Daily they were “in perils of waters, in perils of robbers, in perils by the heathen, in perils in the city, in perils in the wilderness,” but they were all as nothing compared to what lay before, so that it would appear almost like a waste of time to dwell upon the details of this long overland journey from St. Petersburg to Bagdad.

Bagdad is a city on the ancient river Euphrates, not far from the supposed site of the Garden of Eden, but Mr. Groves found the city to be a dreadful place, the temperature at times so hot that during the day all took refuge in the cellars under the house, and by night all slept—or tried to sleep—on the roof of the house. Nearly all the inhabitants were fanatical Mohammedans, who delighted in murder, war, and robbery. Little wonder that he found there, too, the dreadful plague, carrying off thousands of victims; and this with “war,” “famine,” and “flood” was the sum of the history of his three years’ stay in that dreadful place. The most distressing and touching part of it all was when his brave and noble-hearted wife, Mary Groves, died of the dreadful plague. Family after family had been swept out of existence in the district all round about where the missionaries lived, and still the “plague came not nigh their dwelling,” but when the storm seemed to have passed over, and light, and hope, and the dawn of a new day appeared to be breaking upon them, Mr. Groves makes this entry in his diary: “The Lord has this day manifested that the disease of my dear wife is the plague, and of a very dangerous type, so that our hearts are prostrate in the Lord’s presence. . . It is indeed an awful moment, yet my dear wife’s faith triumphs. The difference between a child of God and a worldling is not in death, but in the hope the one has in Jesus, while the other is without hope and without God in the world.”

From Bagdad, Mr. Groves and family went on to India, and finding very many open doors for the Gospel there he decided, “as much as in him lay,” to preach Christ to the heathen millions of this most populous country in the whole of Asia.

After seeing the need in many parts of India, Mr. Groves returned to England, and took back to India Messrs. Bowden and Beer, both of Barnstaple. These two missionaries settled in the Godavari district, and began work somewhat to the south of the Delta proper. For twenty years they toiled on almost alone, and with little encouragement, but others were raised up to join them—Mr. Heelis, Mr. M ‘Crae, Mr. Miles, Miss Taylor, and others—and now the work has spread into the Delta and over a wide area.

Mr. Groves, in those early days, was blessed to a native, J. C. Aroolappan, who traveled about among the village some distance to the south of Godavari, Many through him believed, and churches were formed, but the work was not known to Christians in this country. Aroolappan died, and troubles came to the little assemblies. Some good missionaries wished to help them and join them to the Church of England, but the simple people could not fall into their ways. A Baptist society next tried to befriend the few native churches, but hitches occurred. They had been taught differently by Aroolappan, and when Mr. Handley Bird visited them a few years later, they received him with open arms. Can we imagine the joy of our brother in seeing in those many churches the fruit of Mr. A. N. Groves’ small beginnings sixty years before?

Mr. Groves applied all his inherited ingenuity in seeking to improve the lot of the native Christians in India. Silk farming, coffee planting, and other industries were tried, involving the outlay of much of his own money,. with but little success.

But years of anxiety and privation had told heavily upon him, and he was forced to return to England. He fell asleep at Bristol in May, 1853, and the first number of The Missionary Reorter was published in July of the same year. The Missionary Echo, afterwards Echoes of Service, has followed the work of The Missionary Reporter, so that as we from time to time read reports of work for the Lord in India, China, Africa, and many other distant places, we are forced to remember the hero who, under God, laid the foundation of much of the missionary interest happily found throughout our assemblies.

Luther Raju Sirra said ...
Dear Brethren.
Greetings in the name of our Lord and God Jesus Christ precious name. Wonderful testimonials to the God's people.
Thursday, Nov 16, 2017 : 06:17
Charly Thomas said ...
Anthony Norris Groves was a truly great pioneer .What a wonderful example of Christ likeness in words and deeds.
Tuesday, Mar 9, 2021 : 07:22
jenkins-alan3@sky.com said ...
I am an elder in the Gospel Hall moorland road Neath and am in the process of writing a book , which I hope to have published , by Grosvenor House publications , entitled ' who shall roll away the stone ', which records the challenges faced by missionaries of past and present ,and how God overuled the circumstances to allow the work to progress. I write therefore to request permission to use the image of A.N.Groves who is included in the book. It is my intention that all royalties will be donated to the Lord's work abroad. I await your early reply. Yours in Christ , A. Jenkins.
Monday, Apr 19, 2021 : 20:52
Tom said ...
Hi Alan, you are welcome to use the photo on the website. It's the same one in Chief Men I believe.
Tuesday, Apr 20, 2021 : 06:08