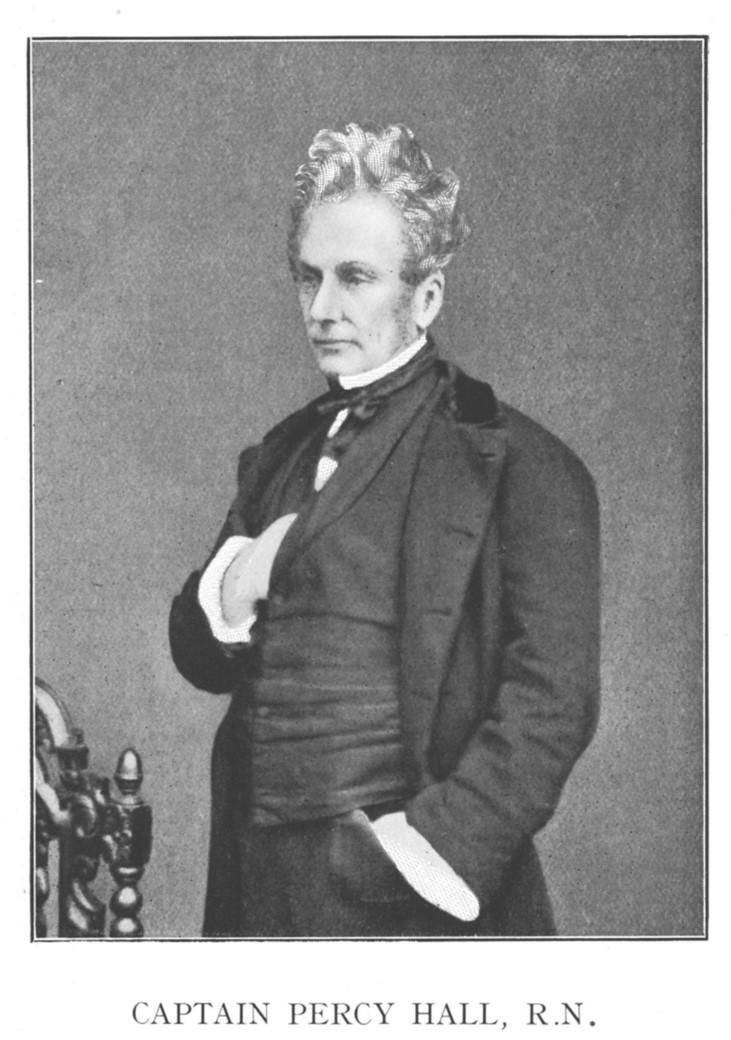 CAPTAIN PERCY FRANCIS HALL, R.N., was one of the earliest brethren at Plymouth, a teacher and preacher of the Word. In the year 1830 J. N. Darby went to Oxford, where he got in touch with G. V. Wigram, F. Newman, and B. W. Newton. Invited by Mr. Newton to Plymouth, he found Capt. Hall in the house on his arrival, was introduced to him as one actively engaged in preaching in the villages.

The Captain had attained to the rank of Commander in the Navy, but he resigned his commission for conscience sake, although he could ill afford the loss of his pay. He set forth his reasons in a tract entitled "Discipleship," which was favoured by some and condemned by others, although none questioned his sincerity and devotedness. He soon became a great friend of J. N. Darby, H. W. Soltau, J. L. Harris, G. V. Wigram, and other "chief men," and was often quoted in a MSS. Diary which was long treasured as a memento of these wonderful early days.

Plymouth being the centre of an assembly which at one time numbered over 1000, attracted the ministry of the English leaders from other towns. As they steadfastly refused to accept any distinctive designation, it was almost inevitable that the communities should become known as "PLYMOUTH BRETHREN" - "Brethren" being the Scriptural term in most frequent use, and "Plymouth" being the centre of the largest gathering and most of the leaders. Finally the title became general, and is to-day world-wide, although then and now persistently repudiated as a nick name. The title "brethren," "Christians," "believers," "saints," etc., being used not in a sectarian or divisional sense, but as the names sanctioned by Scripture and embracive of all "children of God by faith in Christ Jesus" (Galatians 3:26).

Prophetic meetings were commenced in 1827 at Aldbury Park, Surrey. Lady POWERSCOURT, who attended them, was so delighted that she established similar gatherings at Powerscourt House, the lovely country seat, near Bray, Co. Wicklow. At these meetings Capt. Hall took part, along with brethren Darby, Bellett, and others. He was also one of the principal speakers at the special gathering of guides at Bath in 1848, intervened in the interests of peace in the "Bethesda" trouble of 1849, and eventually adopted anything but "exclusive ground," for in his "Unity: a Fragment and a Dialogue," he declares, "I am satisfied that any Christian of the sundry parties around us...could say with a bold and free spirit, I meet with my fellow Christians in the Name of the Lord Jesus Christ."

Of a very independent temperament the Captain did nothing by halves. He sold all his valuable possessions, and had everything in common with the poorer brethren (Acts 4. 32). He had been a "dandy" in his unregenerate days, and latterly, as the photo indicates, used to ruffle his hair and rumple his linen cuffs to show that he had no further love for such "vanity!" He closed his earthly course at Weston-super-Mare, on 11th October, 1884, at the advanced age of eighty, and entered upon the Heavenly, where Unity in its highest and fullest sense will be unbroken and names unknown, except "the Name which is above every name."

Timothy Stunt said ...
The most comprehensive account of Percy Hall is by Michael Schneider, ' "The extravagant side of Brethrenism": The Life of Percy Francis Hall (1801-84)' in Tim Grass [ed.], 'Witness in Many Lands: Leadership and Outreach among the Brethren' [Studies in Brethren History], (Troon:BAHN, 2013) pp.17-44.
Thursday, Mar 9, 2017 : 15:22
Rodger said ...
"and was often quoted in a MSS. Diary which was long treasured as a memento of these wonderful early days."