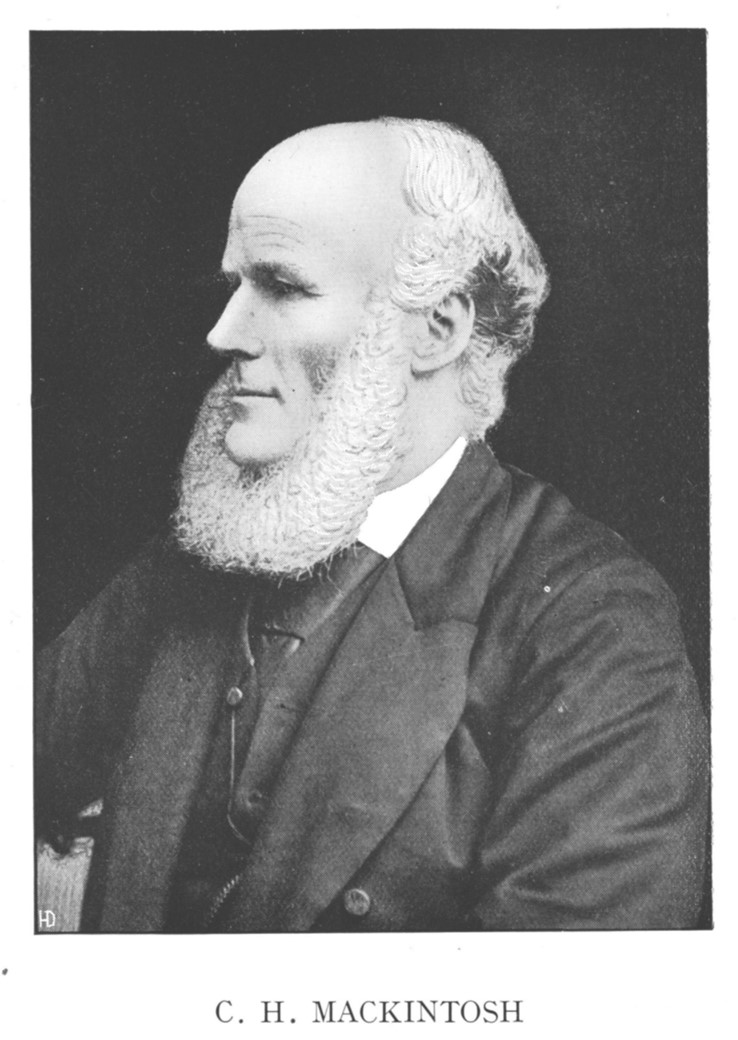 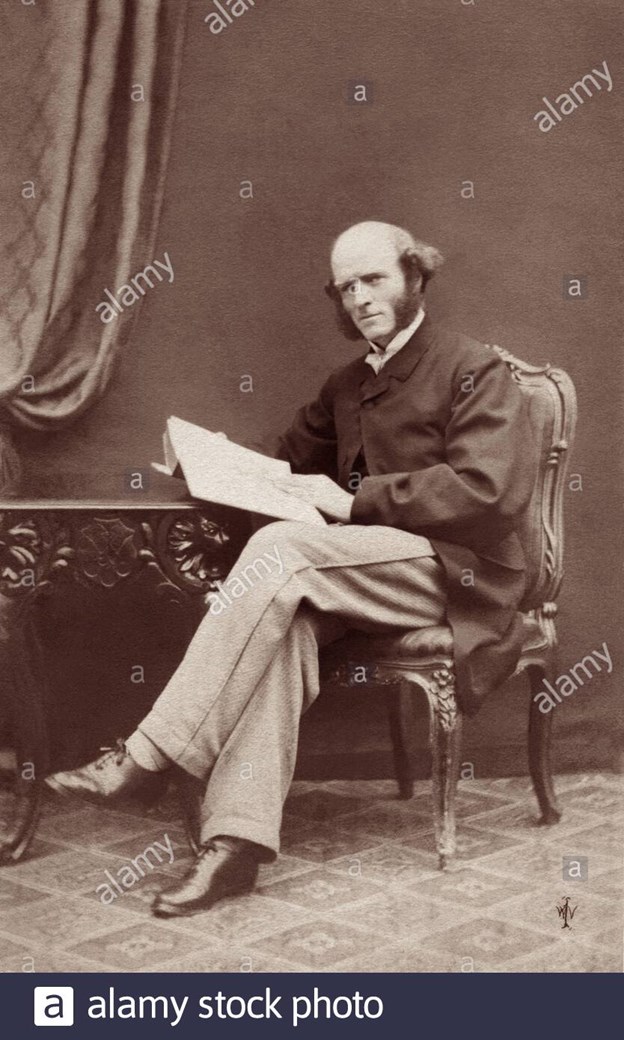 CHARLES HENRY MACKINTOSH, whose initials, "C.H.M." are known world wide, was born in Glenmalure Barracks, County Wicklow, Ireland, in October, 1820. His father was a Captain in the Highlanders' Regiment, and had served in Ireland during the Rebellion. His mother was a daughter of Lady Weldon, and of a family long settled in Ireland. At the age of eighteen the young man experienced a spiritual awakening through letters received from his sister after her conversion, and obtained peace through the perusal of J. N. Darby's "Operations of the Spirit, " being specially helped by words to the effect that "it is Christ's work for us, not His work in us, that gives peace. "

Entering a business house in Limerick, the young Christian "gave attention to reading, " and diligently applied his mind to various studies. In 1844 he opened a school at Westport, throwing himself with much enthusiasm into educational work. His spiritual attitude at this time may be inferred from the fact that he aimed at keeping Christ enshrined in the citadel of his life, and making Christ's work his chief concern. At length, in 1853, he fearsd that his school was becoming his primary interest, and accordingly he gave it up.

In the meantime his pen had been busy with expository notes on the books of the Pentateuch. At intervals during the past forty years the volumes of "Notes by "C.H.M." have been issued, one each upon Genesis, Exodus, Leviticus, and Numbers, and two upon Deuteronomy. These works, which are characterised by a deep-toned evangelical spirit, have been published in successive and large editions, and the Preface was signed by his friend Andrew Miller, who largely financed their issue, and who correctly says of the teaching: "Man's complete ruin in sin, and God's perfect remedy in Christ, are fully, clearly, and often strikingly presented. "

As an expositor, "C.H.M. " had a perspicuous style, and presented his views with much strength. Some of his deductions were of a type which the generality of believers would regard as peculiar; but for loyalty to God's Word, and unswerving trust in Christ, no writings could be more stimulating.

After ceasing scholastic work, "C.H.M. " went to Dublin, where he began speaking in public. For many years he boldly stood forth in defence of the Gospel, and to proclaim the truth, and God owned his labours in a remarkable degree. When the Revival swept over Ireland in 1859-60, he was very active, and some account of his labours may be found in the early volumes of "Things New and Old. " He was a man of great faith, and was ever ready to testify that though God had often tried Him he had never allowed him to suffer want in the matter of life's necessities while engaged in Gospel work and without material employment.

During the last four years of his life he resided at Cheltenham, and when unable, through the weakness of advancing years, to do much on the platform, he still continued to write. His last series of tractates was entitled "Handfuls of Pasture. " The influence of his writings cannot be estimated. He was continually receiving letters from all parts of the world acknowledging the satisfying character of his teaching of the books of Moses.

His first tract in 1843 was on "The Peace of God. " When in 1896 he despatched a manuscript to his publishers on "The God of Peace, " his hand was stayed, and a few months later he entered into rest. His "Miscellaneous Writings" have been bound up in six volumes, corresponding with his expositions.

He peacefully fell asleep on 2nd November, 1896, and four days later devout men carried him to his burial in Cheltenham Cemetery. His remains were laid by the side of those of his loved wife, and in the presence of a company gathered from many quarters. Dr. Wolston, of Edinburgh, discoursed on the burial of Abraham, from Genesis 25. 8-10 and Hebrews 8. 10. Before dispersing, the company sang J. N. Darby's beautiful hymn:

"O bright and blessed scenes.
Where sin can never come;
Whose sight our longing spirit weans
From earth where yet we roam."

Plowboy777 said ...
Thank you for these wonderful heaven blessed treasures. They bring the reality of the great doctrines and truths of the Great God and Saviour The Lord Jesus Christ. What a rich blessing these are. I heard about these writings of this blessed man of God just today, I have found new eternal treasures with which to feed and refresh my soul. God bless you for publishing these most precious works.
Tuesday, Aug 18, 2020 : 11:16
Jonathan said ...
I came across this photo of CHM in earlier life which I hadn't seen before.

(Given my recent performance on this site, Tom, you may now tell me it is already on here in plain view!)
Wednesday, Sep 30, 2020 : 20:46
Tom said ...
Thanks, it def wasn't on the site. Not sure if I've seen it before, or if it was in Edwin's biography, as not handy to check. If not would be good to know where it came from.
Thursday, Oct 1, 2020 : 00:19
Jonathan said ...
I had a flick through Edwin's bio but couldn't see it...
Thursday, Oct 1, 2020 : 05:23
Rod Lomprey said ...
C.H.M. is the most spirituality profound Christ centered writer that I have ever read. I so much appreciate his writings. He has inspired countless millions of believers.
Saturday, Dec 5, 2020 : 06:24
silvia said ...
Thank you so much for publishing those books and articles, I read them a few years ago and now I am downloading them for my son. In the midst of a sea of Christian publications those books and articles are a real treasure. I cannot express how thankful I am to God for sending such a Saviour. Thanks again for making those books available.
Monday, Jun 21, 2021 : 12:56
Michael said ...
C.H .M is the only writer,in my view,that makes clear sense of the scriptures.He fluid writings are priceless and easy to understand and appreciate.We need more men like him today.Where are they?
Tuesday, Sep 28, 2021 : 06:02
Samuel said ...
Do you have the book where Stuart McNair narrates his studies with CHM and how CHM gave him an “apostolic” benediction for his forthcoming missionary labours?
Thursday, Sep 30, 2021 : 04:18
Syd said ...
Michael, you note a great fact - that the Lord raised up CHM to be one "who has spoken unto you the word of God," and so we can remember Him. Darby spoke highly of him, and defended him against false accusations. He is probably of the "brethren," the most widely read, and Mr Moody said CHM influenced him the most. It was in a time when the Spirit moved such men, who devoted themselves wholeheartedly. I have not found similar today; but we have the writings, and recovered truths of that time. For that we thank the Lord.
Friday, Oct 1, 2021 : 22:42
Samuel said ...
PP Bliss read and enjoyed CHM. In PP Bliss' first biography, it states how the hymn "Free from the Law, O happy condition" was evoked from reading an article from CHM's "Things New and Old". Theologically this is a quintessentially "Brethren" hymn. It is annoying to see this great hymn get dropped from modern hymn books used in "assemblies".
Monday, Oct 4, 2021 : 15:33
Syd said ...
You are so right, Samuel. And then we find hymns by Horatius Bonar like, “I lay my sins on Jesus....I bring my guilt to Jesus” in “Brethren” hymnbooks. Philip Bliss’s hymn “White as snow” directly, and rightly contradicts Bonar. Bliss writes:
What! "lay my sins on Jesus?"
God’s well beloved Son!
No! ’tis a truth most precious,
That God even that has done. (Note: "He hath laid on Him the iniquity of us all")

What! "bring our guilt to Jesus?"
To wash away our stains;
The act is passed that freed us,
And naught to do remains.