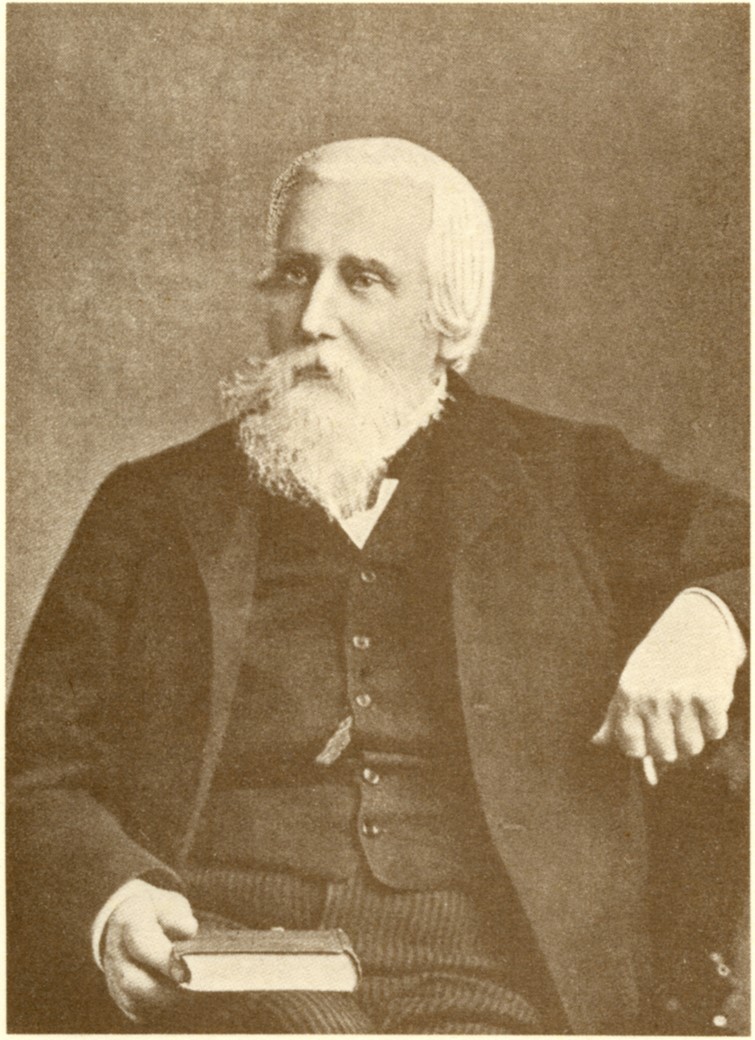 CLARENCE ESME STUART was the youngest son of Mr. Wm. Stuart, of Tempsford Hall, Sandy, and grandson of Hon. Wm. Stuart, Archbishop of Armagh, who, like that prelate's father, enjoyed the special confidence of King George III. The Earl of Bute was direct ancestor, likewise of the present Marquis of Bute. The family descends collaterally from the old royal house of Stuart, and C. E. Stuart was by some regarded as bearing a likeness to Charles I. His mother was a maid-of-honour to Queen Adelaide as Duchess of Clarence, who was his godmother; hence the name Clarence. The name Esme is one familiar to students of modern Scottish history.

Clarence Stuart was born in 1828 and was educated at Eton, from which he proceeded to St. John's College, Cambridge, in accordance with the custom of his family. Here he took his degree of M.A., after gaining one of the earliest of the Tyrwhitt University Scholarships in Hebrew. For sacred study he had early conceived a special taste; the more so as, under the fostering care of a Christian mother, C. E. Stuart in his youth experienced the spiritual change by which we pass "from death unto life" (John 5. 24). He would, doubtless, in due course, have taken Orders in the Church of England, to which his family belonged, but a defect in his speech seems to have occasioned his remaining what is termed a layman.

Mr. Stuart, marrying a daughter of Colonel Cunninghame, of Ayrshire, settled in Reading, where for several years he interested himself in Church work of the Evangelical type, that with which his family was traditionally identified. Amongst other forms of activity, Mr. Stuart at this period of his life promoted the operations of the British and Foreign Bible Society.

About the year 1860 Mr. Stuart's attention was called to the position taken by those Christians commonly called "Plymouth Brethren" (though they have consistently rejected any such title), represented in Reading by a large "gathering," amidst which ministered the late Wm. Henry Dorman, a former Congregational minister, whose connection with the "brethren" dated from about the year 1840. In the years 1845-1848 Mr. Dorman figured as a trusted ally of the late John Nelson Darby in the formation of what has since been denominated the "Exclusive" section of brethren, the continued unhappy effect of which his eldest son, Mr. W. H. Dorman, of Stafford, endeavoured to some extent to remedy. Mr. Stuart became convinced, under the late Mr. Dorman's influence, of the untenable character of his own churchmanship, and without more ado took his place, as the expression was, in the Reading fellowship, which for years was identified especially with his own name.

During the years 1864-1866, Mr. Stuart's fidelity to "J.N.D.," like that of others, was tested by Mr. Dorman's uncompromising opposition to Mr. Darby's teaching with reference to a class of sufferings of our Lord, discriminated as “non-atoning,” as derived from His association with Israel. This doctrine “W.H.D.” put on the same plane as that of B. W. Newton, which brought about the split in 1848. The close acquaintance, however, of C. E. Stuart with the usage of Hebrew words which came into play for any Biblical scholar having to consider such a question, aided him in determining the direction of his own sympathies in the matter. He did not follow the example of his Reading associate, who then seceded from the Darby fellowship.

In 1881, when “J.N.D.” lent himself to another unsettlement among brethren, Mr. Stuart again stood with him; and in the next year, when that remarkable man passed away, the hearty voice of “C. E. S.” was one raised over his interment. For three years longer Mr. Stuart remained in the company of those who had owned the special leadership of “J.N.D.”

In 1885 a storm arose over some of his own views which then acquired prominence. These were deemed by many inconsistent with the traditional teaching of brethren, especially as regards the standing of the Children of God. In a further cleavage, which searched many hearts, some rallied to “C. E. S.,” and accepted his view as a distinct advance in truth, whilst others, not prepared to commit themselves definitely to it, held that the difference of judgment manifested from this time afforded no sufficient reason for severance from “C.E.S.”

The eighteen years from then till his death proved full of activity for his pen. In addition to independent books and papers issued by him, Mr. Stuart was a constant contributor to a periodical entitled “Words in Season.”  His earlier writings comprised a book on the Sacrifices, “Simple Papers on the Church of God,” an article on “The Atonement, as set forth in the Old Testament,” his “Textual Criticism of the New Testament, for English Readers,” and a “Review of Robertson Smith’s Lectures on the Old Testament in the Jewish Church,” a paper the value of which was acknowledged by many English clergymen. In textual criticism Mr. Stuart was an adherent of the school of Tregelles rather than that of Scrivener.

Publications belonging to the two last decades of his career commenced with a pamphlet on “Christian Standing and Condition,” which called forth much acrimonious discussion, culminating in a division. This, and cognate pamphlets were followed by a series of papers on Propitiation. From long familiarity with the scheme of Old Testament types, Mr. Stuart insisted upon the detailed fulfilment of the presentation of the blood of the Antitype after death, as the propitiation par excellence, against the current view that the Cross covers the whole ground of the atoning work. The line thus taken by him, although supported by several expositors, including R. Govett, tended to accentuate the difference existing between him and his old associates, who held, with such writers as Ellicott, that the Old Testament should bend to the New, and not vice versa. Then came a series of devotional expositions of the Gospels of Mark, Luke, and John, the Acts of the Apostles, the Epistles to the Romans and Hebrews, and the Book of Psalms, the spiritual value of the latter being acknowledged by Professor Cheyne.

Amongst the latest of his writings was a pamphlet entitled “The Critics: Shall We Follow Them?” In this case “C.E.S.” did battle for traditional views of the Old Testament against the Higher Critics. Nevertheless, he kept abreast of the most recent scholarship, valuing, for example, Professor Driver’s “Treatise on the Hebrew Tenses.” His library contained all the standard works used by modern Biblical scholars, with some rare specimens from the past, including a valuable copy of the Complutensian Polyglot, which in his old age he presented to the library of his college.

As an interpreter, Mr. Stuart must be ranked with those who adhere closely to the wording of the text of Scripture, and to belief in verbal inspiration. He heeded little extraneous sources, such as Patristic interpretation; least of. all the suggestions of “modern thought.” With independent judgment he held firmly the general body of “recovered” truth, ecclesiastical and prophetic, characteristic of “brethren.

Simple in his demeanour, with much charm of manner, he endeared himself to the poor of the flock, to whom he was “good.” He delighted to share with them the light which he enjoyed. C. E. Stuart must be reckoned with those of whom it may be said that, although dead, they
yet speak.

Timothy Stunt said ...
Edward Elihu Whitfield's three page account of C E Stuart is included in the first edition of Pickering's 'Chief Men among the Brethren' but in 1931, the editor omitted a few sentences (which were in the first edition) one of which was concerned with Stuart's standing among Brethren from 1885 until his death in 1903. A few years before he was associated with Brethren, Stuart wrote a letter in August 1858 to the 'Record' with some suggested improvements that he felt could be usefully made to Valera's Spanish translation of the Bible. Timothy Stunt
Sunday, Dec 31, 2017 : 23:24
Tom said ...

There seems to be a fair bit of confusion over dates for C.E.S. Chief Men and everything else online says he was born in 1828, but this is evidently incorrect. Eton school records give the date as the 29th May 1827, though other sources e.g. here, give it as 27th. He was baptised 30th Jun 1827, in St. George, Hannover Square, Westminster.

8 January should be correct. On 10 January his death notice appeared in the Reading Mercury:

This one from the Reading Mercury of 28 Feb 1903 is also interesting:

Sunday, Dec 16, 2018 : 06:04
Nick Fleet said ...
Noel's 'History...' mentions that CES issued a criticism of the Little Flock Hymn Book (presumably the 1881 edition) before the division of 1884. Does anyone know anything about it?
Saturday, Apr 10, 2021 : 01:18
Alexander Thomson said ...
From 1958 to 1965, from ages 11 to 18, although a Scottish Baptist, I had frequent dealings with, and learned much from, Scottish Brethren. Among the works to which I was introduced, were those of Tregelles and Stuart’s text-critical work (circa 1900 -1899?) for English readers. Were there any active associations and/or joint enterprises between Tregelles and Stuart? We could do with a sound updated revision of Stuart’s most useful t-c list! (In passing, I am pleased to note that Tregelles received the DD from St Andrew University, my own alma mater!)
Monday, May 24, 2021 : 15:11
Alexander Thomson said ...
"Μη τι αποληται" - "Lest anything should be lost" - Permit me to record my thankful reminiscence of two other works to which the Brethren introduced me:-
1. the German publisher, Tauchnitz's 1000th edition in his "Collection of British Authors" - a small edition, in 1869, of the English AV/KJV New Testament, with Tischendorf's notes of the variant eadings of the Sinaitic, Vatican and Alexandrine manuscripts. I used to carry this book around everywhere!
2. the edition, also published by Tauchnitz, in 1881, prepared by Oscar de/von Gebhardt, of the last of Tischendorf's editions of the Greek New Testament, comparing the variant readings of Tregelles and of Westcott & Hort; and having cross-references as footnotes, and critical notes at the end of the book. This edition was quite popular, certainly in Scotland and I believe also in England. For a time, it was my own study version.
Monday, May 24, 2021 : 16:25
Alexander Thomson said ...
Did Thomas Newberry, or any other Brethren man, have any part in Bagster's "The Englishman's Greek New Testament"?
Tuesday, May 25, 2021 : 02:29
Alexander Thomson said ...
OK, I now realise that it *was* Newberry who did the Bagster volume!
Monday, May 31, 2021 : 04:20
Timothy Stunt said ...

With reference to Alexander Thomson's earlier question about whether Tregelles and Stuart ever co-operated: in sixty years of questing for information on Tregelles, I have never seen anything to suggest they ever worked together. From the early 1850s Tregelles was quite hostile to the Brethren. I have devoted quite a bit of my recent Life and Times of Samuel Prideaux Tregelles: A Forgotten Scholar (Palgrave Macmillan 2020) to his experiences with the Brethren, and a whole chapter to his stormy relationship with Tischendorf.  Timothy Stunt

Tuesday, Jun 1, 2021 : 05:33
Alexander Thomson said ...
Timothy Stunt, Many thanks for your informative comments! It’s perhaps a pity that the two didn’t co-operate, but even more that things were not peaceful with Tregelles. I look forward to reading your book!
Tuesday, Jun 8, 2021 : 01:22