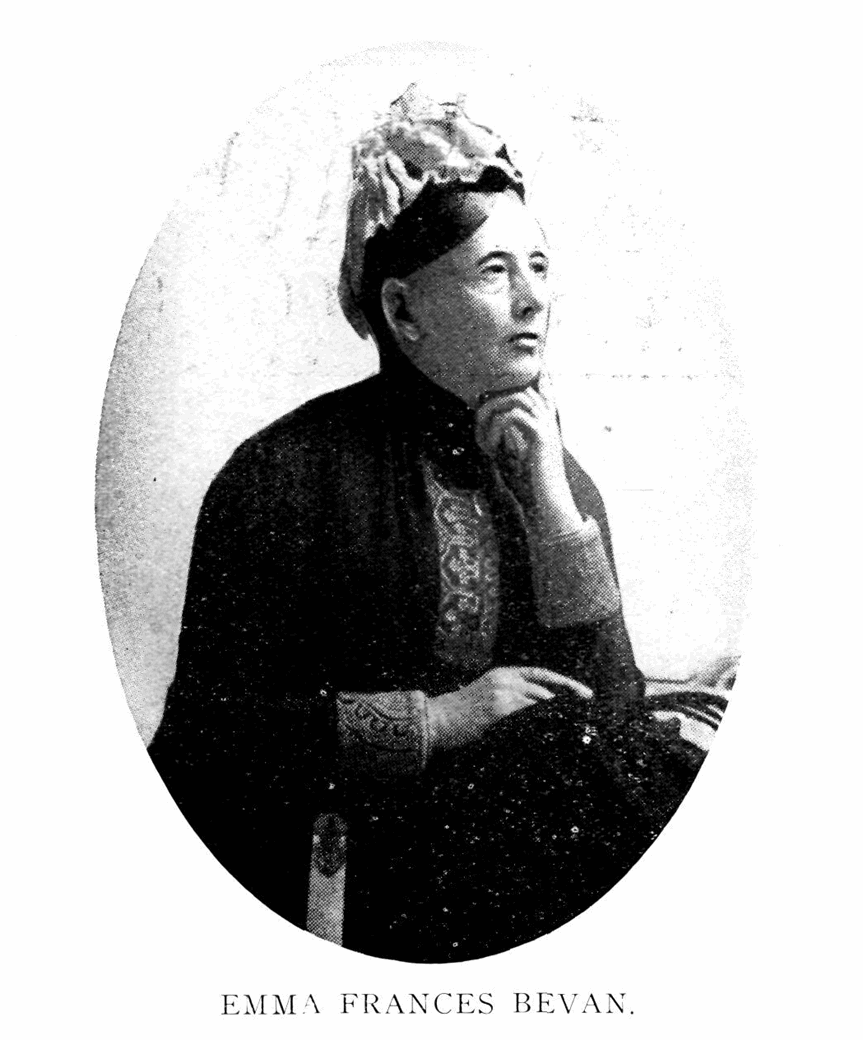 Short Bio from "Sketches of Our Hymn Writers"

ANOTHER lady writer living about this time, whose translations and original compositions occupy a notable position in our hymnody, gave to us that exquisite hymn commencing:

'Midst the darkness, storm, and sorrow,
One bright gleam I see;
Well I know the blessed morrow
Christ will come for me.
'Midst the light, and peace, and glory,
Of the Father's home,
Christ for me is waiting, watching,
Waiting till I come.

The name of the author is Mrs. Emma Frances Bevan. She was the daughter of Philip Nicholas Shuttleworth, some time Bishop of Chichester, and was born at Oxford on September 25th, 1827. Though brought up under the influence of "high church" principles which she early imbibed, Frances Shuttleworth, a few years after the death of her father—which occurred when she was only seventeen—was led to take her place amongst those believers who met on the first day of the week to remember our Saviour's dying love in "the breaking of bread." This came about through attending Bible readings held in the house of a friend, to which the young woman had been invited. It was here that she saw for the first time these truths which eventually led her into the paths of true discipleship.

At the age of twenty-nine she was married to Robert C. L. Bevan, of the noted Lombard Street banking firm, who was well-known for his benevolence and untiring devotion to the Lord's work. Years after, when writing the biography of her husband, Mrs. Bevan tells the story of how she came to the house of Mr. Bevan to his Bible readings, which were to be the means of leading her into "newness of life." Then Mrs. Bevan reveals to the reader: "As time passed on, I was no more a visitor, but at home in his house." In the "Believers Hymn Book" the familiar martial air assigned to "Midst the darkness, storm and sorrow" rather detracts from the spirit of the hymn. A more appropriate melody, and one which exactly suits the theme of the song, is the tune set to the hymn in Sankey's hymn book, "Precious thought my Father knoweth." Mrs. Bevan wrote this hymn whilst residing at Princes Gate, London. Much doubt has from time to time arisen as to the authorship of the hymns of this gifted writer because of the fact that when sending each composition forth, instead of placing her own name or initials to it, Mrs. Bevan invariably used the initials of the name of the house where the hymn was written. This has occasioned much perplexity to hymnal editors, as nearly a score of her compositions have different initials affixed to them. For instance, the hymn just referred to bore the initials P. G. ("Princes Gate.").

Frances Bevan wrote a considerable number of original hymns and has published several volumes of poems, but her name, in the realm of hymnody, is best remembered by her excellent translations from the German. Notably amongst these is the well known Gospel hymn from Neumeister (1671-1756).

Sinners Jesus will receive;
Sound this word of grace to all
Who the heavenly pathway leave,
All who linger, all who fall.

Mrs. Bevan spent the greater part of the later years of her life along with her husband at Cannes, in the South of France, returning to England during the summer months. When her husband died in 1890, Mrs. Bevan did not again visit England, but continued to reside at Cannes in her house, Chalet Passiflora—which became the birthplace of many of her hymns—where she passed away on February 13th, 1909, in her eighty-second year.

And now to the patient reader who has accompanied me along the pleasant bypaths of hymnody, one word more. It may have been observed that our particular sphere has in a measure been somewhat limited, inasmuch as only the hymns of our assemblies have engaged our particular attention. The mention of these, with their many associations, may have awakened cherished memories, as well as having afforded some pleasurable hours to the spiritual uplifting and edification of those who have accompanied me in our wanderings. It is my sincere hope that the reader may be better able to appreciate the hymns we sing, when we know their story. During our sojourn I have made many friends. We have wandered together through the fragrant meadows of song, our melodious hearts singing in unison the praises of Him, the source of all our song. Thus shall we sing "till some sweet day," when, responsive to the summons of our Lord and Saviour, we shall rise to join the everlasting song in the heavenly courts above. Then:

O the blessed joy of meeting,
All the desert past!
O the wondrous words of greeting
He shall speak at last!
He and I together entering
Those bright courts above;
He and I together sharing
All the Father's love.

Alfred Corduan said ...
SO . . . GiveN that she liked to confuse us with the initials of the house she was in when she wrote a hymn :-) . . . And given that the tune shown with “Precious Thought My Father Knoweth” in Sankey’s collection is a better choice for her “Midst the Darkness” hymn than the one we often choose . . . And given that “Precious Thought My Father Knoweth” is ascribed to the mysterious “L.W.” That I am now trying to figure out . . . Any chance that “Precious Thought” was also written by her . . . In the house called “L.W.”? :-). I am getting nowhere with “L.W.” Per se.