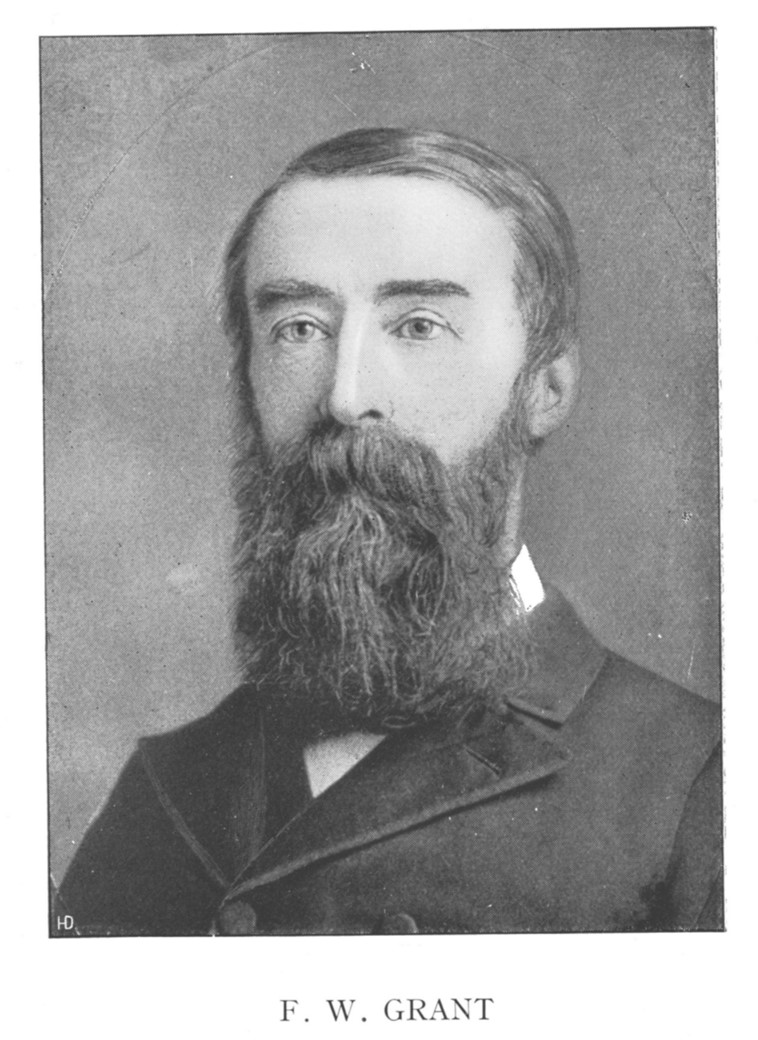 F. W. GRANT was born in the Putney district of London, on 25th July, 1834. His conversion was occasioned by the reading of the Scriptures himself, and not through the instrumentality of others. He was educated at King's College School with the expectation of securing a position in the War Office. The necessary influence for this failing, he went to Canada when he was twenty-one years of age. At the time he came to Canada the Church of England was opening parishes in the new parts of the country, and he was examined and ordained to the ministry without having taken the regular college course. He left the "systems" on receiving light through the reading of the literature published by so-called "brethren, " and lived for a time in Toronto, afterwards coming to the United States, where he lived in the city of Brooklyn, and then in Plainfield, N.J., till his death. He was the leader in what is known as "the Grant party" in America.

His claim for a permanent place in the hearts of the saints rests—as it really does with any, but more ostensibly than with most—in his identification with the Word of God. Unknown to many in the flesh, who have profited by his ministry, with little of what may be called popularity, or the magnetism supposed to be so essential in a leader, he is lost sight of in the precious truth which it was his joy to unfold. Those who knew him personally loved him for the worth and Christian nobility of his character, the fruit of God's grace; for that wondrous mind received from Him; and for the simplicity and dignity of a true Christian man. But it is not of these things that we speak, while we would ever seek to walk in the steps of piety and faith wherever seen. We turn rather to that Word to which he held fast, and, in conscious feebleness and dependence, used so constantly. What views of the Word did he give us! What thoughts of Christ! What truths under the guidance of the Holy Spirit! These abide.

He had been for years a diligent student of the Book of Psalms. Not only did their contents attract, but the form in which they were written—their divisions into a pentateuch, the acrostic form of a number of them, their evident relation one to another in various groups—all these things impressed him with the fact that God had written them upon a distinct plan in which the numerical significance of psalm and group and book had a clearly marked and important place. But if the Psalms were written thus, why not all Scripture? So he went on, till he found the same Divine harmony throughout the inspired Word, set to work, and with unbounded patience produced "The Numerical Bible," issued in several volumes, unfortunately not embracing the whole Bible. He was the author of "Facts and Theories as to a Future State, " "Genesis in the Light of the New Testament" "Spiritual Law in the Natural World," "The Crowned Christ," and many other valuable books and pamphlets, which have had an extensive circulation on both sides of the Atlantic.

The passion of our brother's life, the desire that consumed him, was to make Christ more precious, to make His Word, more loved, more read, more studied. He made a s gnificant utterance shortly before his departure. Sitting propped in his chair, with the Word of God open before him, as was his custom through the days of weary, helpless, waiting, he turned to the writer of these lines, and with a depth of pathos, glancing at his Bible, said: "Oh, the Book, the Book, the BOOK !" It seemed as though he said: "What a fulness there; how little I have grasped it; how feeble expressed its thoughts. " Thus he passed to be "with Christ" at Plainfield, New Jersey, on 25th July, 1902, on his sixty-eighth birthday

BM Rogers said ...
Truly there are some of us who have a love for Christ and IN Christ Jesus,that we live pained for those who do not.
We spend our lives in the Word.
We invite others who deny the invitation because they are too busy.
But we know each other as the Body of Christ,of whom our Lord and Savior Jesus is the mind.
Through the blood and the cross,dead to the world and sin,and alive in new life reborn.
Seated in Heavenly places.
A body cannot and should not act in darkness or blindness,but in view and light ,the very Head that thinks and directs It in the holy perfection that is The Word of God.
For that IS His Name.
Father,I pray that this will be heard and acted upon.
That others will have a hunger to learn of the Creator.
In Your Son Jesus,
Thank you.
Amen.
Tuesday, Sep 7, 2021 : 12:31