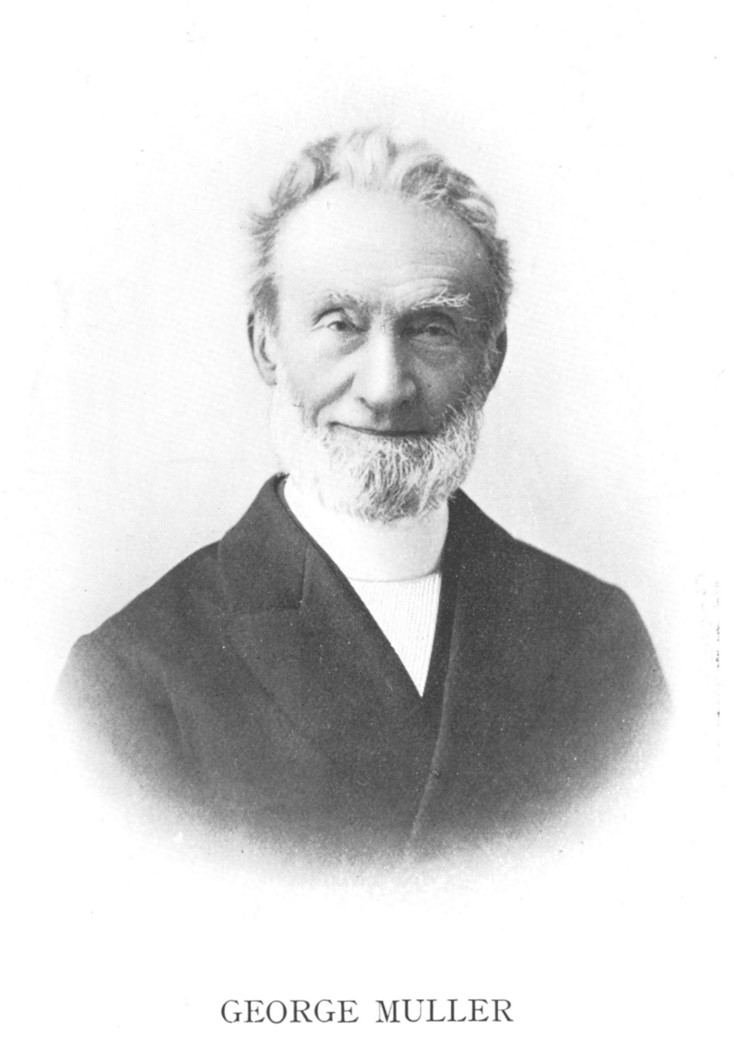 GEORGE MULLER was born in Prussia, and designed by his father for the clerical profession. His youth was spent in utter ungodliness, even surpassing many of his age in sin and folly. His conversion was strangely sudden. It was not through deep conviction of sin or clear Gospel preaching, but simply by finding himself for the first time in the company of praying people. Yet it was indeed a new birth. His life was at once turned wholly to God, and he rapidly grew in the knowledge of Him. His devotion to the ministry of the Word, on which he now entered, became a reality.

He desired to be a missionary to the Jews, for which his study of Hebrew seemed to fit him. By a striking providence he was pronounced, under medical examination, incapable of military service, and was thus set free to give himself to that of the Gospel; and he came to England with the prospect of employment under the London Jews’ Society. There, however, he found himself hampered by conditions to which he could not conscientiously consent. Leaving London, he was led to Teignmouth, in Devonshire, where the Lord so used him that he settled there for a time, and became associated with Mr. Henry Craik in an uninterrupted fellowship until the decease of the latter in 1866. Thence, in 1832, they came to Bristol, where they found an open door, and their united ministry, chiefly in Bethesda Chapel, was exceedingly fruitful.

Already in Devonshire they had learned to lay aside the traditions of “Congregationalism,” such as infant baptism, pew rents, a separate ministerial order, and a stated salary; and they saw that the Lord’s table was for all believers, irrespective of denominational views and distinctions.

While the work at Bristol was growing on their hands, Mr. Muller’s heart was led out to care for destitute orphans. From a small beginning, a second and a third house were rented for their reception. At the first he had laid down for himself the rule that, beyond making known the existence of the institution, he would never apply in any way to man for help; and, further, that he would never reveal to any human being, outside those associated with him in the work, the state of the funds, however pressing the need; for the aim he set before him was not merely the benefit of the orphans, but much more that it might be a witness to all that God is, as ever of old, the hearer of prayer.

Encouraged by God’s manifest help, he sought to enlarge this sphere of usefulness. As means were supplied (for he never under any circumstances would go into debt), he built a large house on Ashley Down for 300 orphans. To this, soon after, he added a second, then a third, and finally two more - five in all, - with accommodation for 2050 orphans and the staff of helpers.

Great as the work had become, and needing a yearly income of about £30,000, so steadfast was his purpose to trust in God alone that during these sixty-five years (from the commencement in 1834) Mr. Muller and his helpers have never been known to depart from their rule. However pressing their trials, the need has been told to God only. Nor have they ever advertised the institution. Only once annually (in early years not always so often), the results have been published some two months after the close of the financial year, to show how the Lord has dealt with them, never failing to meet their needs, though for long periods together the supply was often only by the day, or even by the hour.

The volumes of “The Lord’s Dealings with George Muller,” now compiled into one volume, and the Reports issued annually, are a continuous record of answers to prayer in circumstances of varied trial. Did our limits allow of extracts, these would speak louder than anything that can be said concerning them. One incident, coming under the writer’s notice, may serve as a sample. He had been spending the night at Mr. Muller’s house, and at the simple breakfast there was no appearance of lack. On parting he handed Mr. M. a small sum, having no idea how matters might stand with him. When after two years a Report was issued, he found at that date an entry to the effect that “a brother had been staying the night with them, and they had enough to put on the table for breakfast not only for themselves but for their guest, but there was nothing left to purchase the next meal. The brother, on leaving, put — into his hand, and so their wants were supplied for the time.”

Financial matters were but one kind of need in which, as it arose, God alone was looked to, and found to be a very present help, whatever the trouble. As when in cold winter time the boiler by which the large building was warmed throughout was discovered to be irreparably worn, and had to be replaced, prayer was answered in giving warm weather so long as the operation lasted, and in the men, unasked, offering to work by relays through the night to hasten its completion.

Facts like these, of constant occurrence, spreading over so large a space of time, and the deliverances invariably wrought, are such as to silence all the cavils of unbelief, and to prove that it was God hearing and answering prayer. And this Mr. Muller constantly pressed as applying to every circumstance in which God’s children are placed - that He can be trusted to hear and answer prayer from an honest heart, not on the ground of our own merits, but in the Name of Jesus, if we will wait His time, and let Him do it in His own way.

The money that passed through his hands for the orphans in answer to prayer considerably exceeded a million sterling. Besides this, he received similarly in donations to the extent of some £397,000 means for circulating Bibles and tracts, supporting Scriptural schools, and aiding missionaries.

Leaving his son-in-law, Mr. James Wright, in charge at Bristol, his later years, from 1874 to 1892, were spent mainly in travelling over Britain, the Continent of Europe, North America and Canada, Australia, India, China, and other countries, preaching the Gospel and building up believers
in faith and love, often addressing large numbers of ministers and students wherever he found an open door (and it was freely accorded him in all parts, for he loved all who love the Lord, by whatever name they are called), leaving widespread blessing wherever he went. Early experience in
preaching had led him to abandon all attempt at pulpit oratory, and to aim rather at extreme simplicity, so that his speech was not with enticing words of man's wisdom; but it was in demonstration of the Spirit, and in power.

The secret of his useful life was his simple faith in God and in His Word. He loved the Bible, read it not only at stated times, but whenever he found moments of opportunity, believing it, acting upon it, and finding it true in his experience. And the burden of his teaching was that if we would so read it and act upon it, we might all enjoy the same experience, each in our own station of life or sphere of service. This, indeed, is what many another can bear witness to; and many such have been helped to learn it by the testimony and example of George Muller.

Often he would say, "I am a happy man. " While himself "a Hell-deserving sinner," Jesus was ever his "adorable Saviour. " On his last Sunday he dwelt with peculiar feeling on the joy of seeing Him in His beauty, and "kissing His dear feet."

Early in the morning of March 10, 1898, in his ninety-third year, this man of God was suddenly called from his service on earth to the presence of the King above. The previous day had seen him busy at his ordinary occupation, and in the evening he had taken his usual part in the prayer meeting. The summons was momentary and painless, as if changed "in the twinkling of an eye."

Of the Lord's bounty sent him for personal use he was found to have given away over £80,000, and when his will was proved his whole property amounted to about £60 and the furniture of his apartment. He is gone to his rest, but his works do follow him, and his life will be a standing witness
for God to the end of the Age.