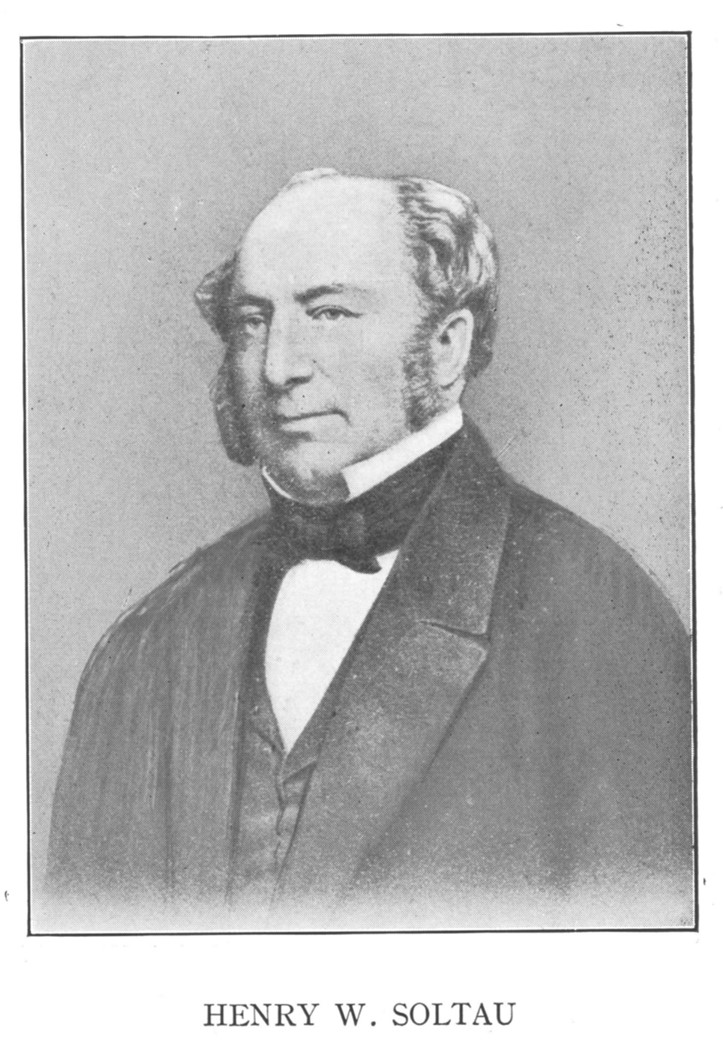 HENRY WILLIAM SOLTAU, the second son of George Soltau, a merchant of Plymouth, was born on the 11th of July, 1805. His father was a godly man, of great energy and foresight, and was one of the founders of the Plymouth Free School, which grew to be one of the largest schools in England. The Bible was taught daily, but no child was compelled to attend the Scripture lessons against the wishes of the parents. He opposed the building of the theatre, when a member of the Town Council, but without success. He died at the age of forty-four, and seemed to have a vision on his death-bed of all his six children safely reaching the heavenly home. His mother was a woman of strong character, and great piety, and Henry was devoted to her.

One of Henry's early recollections was being taken in a boat to row round the "Bellerophon," when Napoleon the First was on board her on his way to St. Helena.

When preparing to go to Cambridge, he read with a private tutor in Kent, having as companions, Samuel Wilberforce and his brother. Entering Trinity College, in 1825, he took his degree in 1827, and there proceeded to study at Lincoln's Inn, and was in due time called to the Chancery Bar. He was greatly interested in natural history and in science generally, and was widely read in many branches. He studied Hebrew in order to understand the Old Testament, and was at one time an earnest seeker after the Truth, longing for rest in his soul. He said he never remembered hearing a clear Gospel preached, though he listened often to Charles Simeon and to other leading evangelicals when at Cambridge; it always seemed to him that "faith in the merits of Christ and doing one's duty" were inseparably mixed. He endeavoured to do what was right, observed the forms of religion, gave away to charities, and read the Bible, and other duties, but he had no peace. He settled in London, and was soon carried away by the attractions of worldly society, and was fascinated by the "innocent amusements" of the day. A great lover of music, he went often to the opera. His attractive manner, sparkling wit, keen intellect, and extensive literary acquirements made him a favourite in society, and he found life opening before him, with wealth and honours awaiting him. But God was preparing him for better things.

In January, 1837, he was feeling weary of his round of pleasure, and was, as he said, like the Israelites who loathed the food they had eaten to repletion, but sever himself from his surroundings he could not. A letter from home spoke of his mother being unwell, and when a second letter came Mr. Soltau resolved to go down at once, though there was nothing alarming in what was said. As he packed his portmanteau he had the conviction that he should never seen his mother alive, and when the weary coach journey was ended and he reached the last stage out of Plymouth, his uncle met him with the news that all was over. Falling down on his knees by the coffin of his beloved mother that night, he prayed his first true prayer: "Lord, if Thou dost not save me, I am lost for ever!" It was the cry of his wounded spirit, weary of the hollowness of life, and face to face with sore bereavement.

Shortly after, he heard an address by Captain Hall on 2 Kings 7, and was led into the light. All things became new, and he rejoiced in the freeness of salvation, so much so that a relative said to him: "You are like the man in the third of Acts, walking and leaping and praising God."

Returning to London, he wondered how his many friends would receive him with his new experiences. He found the question soon settled, for in a very short time they let him severely alone, not relishing his "peculiar opinions. " Soon after his conversion he gave up his practice at the Bar, and went to live in Plymouth with his sisters—drawn by the goodly company of the Lord's people there, gathered in so wonderful a way in Christian fellowship, learning from the Fountain-Head those truths they were privileged to give to the Church, and which were as streams of living waters to thirsty souls.

In leaving the Church of England and casting in his lot with the brethren movement, Mr. Soltau was cut off from most of his family. It was a step which involved much for him, but he esteemed "the reproach of Christ greater riches than the treasures of Egypt. " He set himself to the study of the Scriptures and to the service of the Lord in preaching and teaching, and he was soon fully occupied in the many efforts made to take the Gospel to the villages and hamlets of the west of England, too often sunk in darkness and ignorance. Great was the blessing wrought through God by the earnest men and women in those days—multitudes were saved, and gathered around the Word of God. Schools were opened, and the Word of God had free course and was glorified. Mr. Soltau and Mr. Clulow opened a tract shop in Plymouth, and by its means great quantities of literature were scattered abroad.

When the sad days of division came, Mr. and Mrs. Soltau moved to Exmouth, where they lived three years, and in 1851 went to Northam, near Bideford, where ten happy years passed, their family of three sons and six daughters growing up in the simple and wholesome atmosphere of that beautiful place. The removal to Exeter in 1861 brought Mr. Soltau more before the Church, and his name became widely known through his writings, his book on "The Tabernacle, the Priesthood and Offerings," being greatly appreciated; indeed, it forms the basis for most other books, as well as most lectures, on the Tabernacle. The little book, "The Soul and Its Difficulties: a Word to the Anxious, " has had a very large circulation, and been much used of God. It rejoiced the author's heart that when no longer able to minister he found that his little book was constantly being blessed. His lecture on "They Found it Written; or, Who are the Brethren?" is one of the simplest issued, and has had an extensive sale. All three continue to be widely scattered and read in many parts of the world.

But a great affliction had overtaken him in the failure of his sight. In 1860 it seemed as if total blindness was before him, but he recovered it in measure, and was able to travel alone and to read the largest type Bible. Mr. Soltau visited many parts, including London, where his addresses at the Freemasons' Hall meetings were so valued; Glasgow, Birmingham, Hereford, and many places in the west; also Dublin, where he was specially welcomed and his ministry valued. He seemed to take the warmhearted Irish Christians by storm, and they never forgot his visits.

In 1867, his health, never robust, was evidently failing. He paid a short visit to London in the autumn, and on the last Sunday spoke six times. At one of these meetings in the open air, in Soho Square, he referred to the days when as a young man of fashion he lived near by; he spoke of his conversion, and of the life of happy service for God he had been given. Shortly after he was laid low by paralysis, and he never again spoke in public. Gradually his powers failed, but he never murmured. His peace and calm were unbroken. He delighted to hear of the Lord's work in all parts of the world, especially of that in which his children were engaged.

In 1870 he moved to Barnstaple to end his days near his beloved friend, Mr. R. C. Chapman. When the end came, on the first of July, 1875, he had been unconscious for several weeks, but at the last he suddenly lifted his head, which had sunk on his breast, his eyes opened, and a Heavenly smile lit up his face as without a sigh he breathed his last.

He had the joy of seeing all his nine children early converted, and, as they grew up, giving themselves to the Lord's service. One of them was for long a leader in the M'Call Mission in France, others occupied honoured spheres. He was a wise and tender father, and the home was a centre of love and happiness. What he taught in public he ever sought to practise in the home, and he was fond of dwelling upon the Divine order of responsibility: "First yourself; then the home; then the Church; then the world."

Timothy Stunt said ...
I have devoted some ten pages to Henry William Soltau in my recent book, 'The Elusive Quest of the Spiritual Malcontent: Some Early Nineteenth Century Ecclesiastical Mavericks,' (Wipf and Stock 2015) pp. 166-74, 283-84. Timothy Stunt
Friday, Dec 16, 2016 : 20:33
Marty said ...
Fallen Asleep.—July 25th, 1911 at Malvern, HENRY SOLTAU, second son of the late Mr. H. W. Soltau. Dr. Soltau was visiting Malvern, as the guest of Mrs. Brocklebank. He had spoken at the Gospel Hall on the Lord's-day (23rd), and at the Monday evening meeting; he was bright and cheerful at the supper-table; but soon after he retired to bed, he had a severe heart attack, and, at 2.15 a.m., having spoken of his wife and family, he whispered the name of Jesus, smiled, and entered into rest.
Some will remember that in 1875, Mr. Soltau went to Burmah, where for some years, he sought to make known the gospel. With the conviction that medical knowledge would be of great value in missionary work, he returned to this country, gave himself to medical studies at Edinburgh, and qualified himself to practice.
While in Scotland, he married, and then again went to Burmah accompanied by his wife. In the place where they were working, there was a violent riot, which led to their leaving and returning to this country. In 1893, they went to Ootacamund, India, for a time. Since his final return to this country, Dr. Soltau has been very diligent in the superintendence of Medical Mission work in London, and has rendered much help to servants of Christ needing it. He has also always been ready to counsel any who desired advice as to fitness from a health point of view for service in other lands.
Many will feel the tidings of our brother's departure, and will commend Mrs. Soltau and her son and daughter to God. "Echoes of Service" 1911
Tuesday, Feb 19, 2019 : 04:23
Wendy said ...
2020: I've just discovered the amazing book, "The Tabernacle, The Priesthood, and The Offerings." I love basking in Mr. Soltau's beautiful way with words, but, even more so, his love for Jesus and Jesus' predominance in these O.T. scriptures. Help me, Father, to lift up Jesus in my life and in my conversations.
Thursday, Dec 24, 2020 : 00:09
Manoj Rajkumar said ...
Was any of the soltaus was in ootacamund (Nilgiris)
Hill station in south india