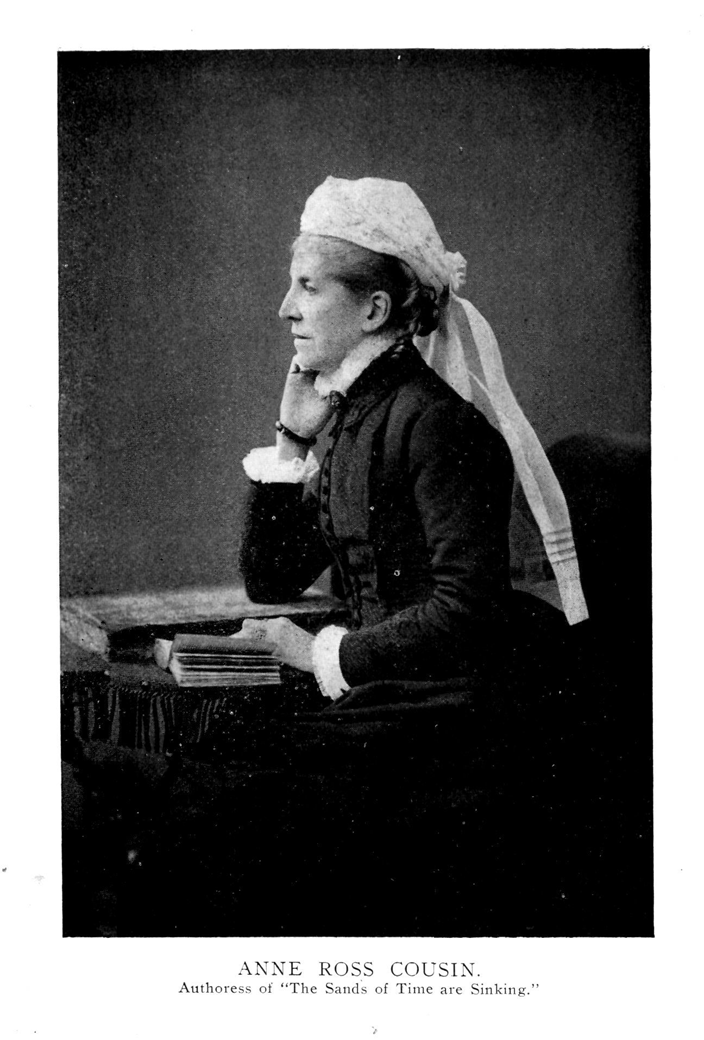 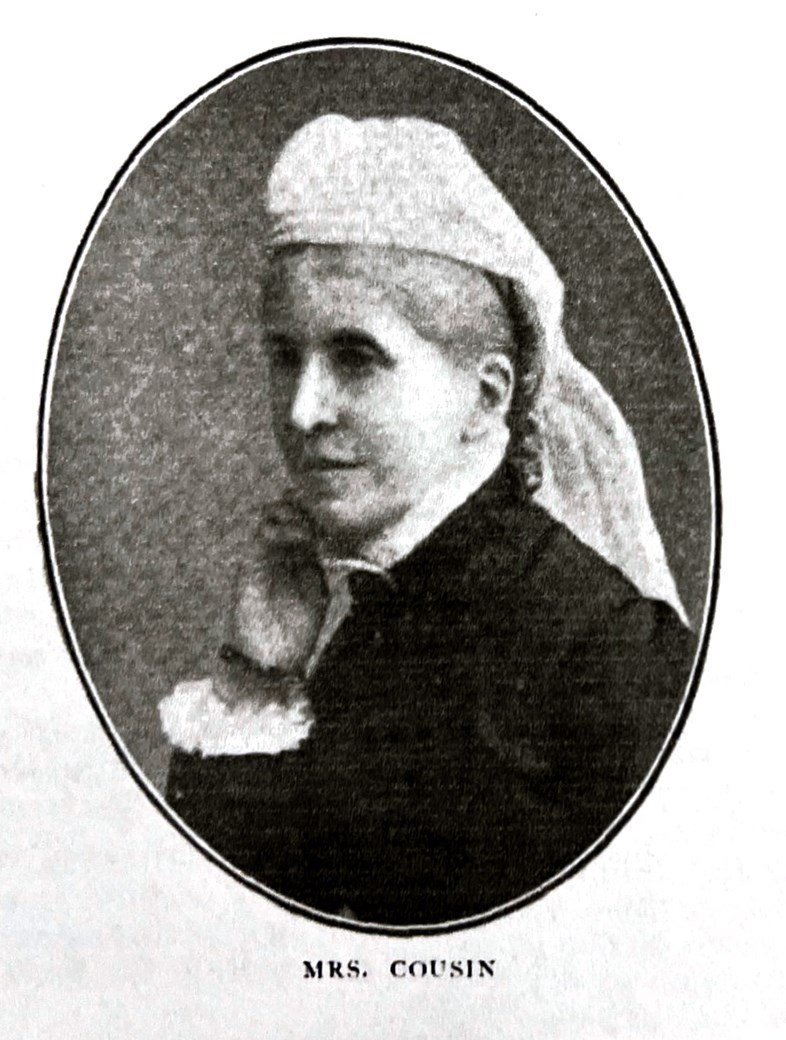 Short Bio from "Sketches of Our Hymn Writers"

Oh! Christ, He is the fountain,
The deep sweet well of love;
The streams on earth I've tasted,
More deep I'll drink above.
There, to an ocean fulness
His mercy doth expand,
And glory, glory dwelleth,
In Immanuel's land.

Between fifty and sixty years ago a modest looking volume of devotional verse was published bearing the title "Immanuel's Land and Other Pieces," by A. R. C. The authoress who thus announced herself was Anne R. Cousin. She lived to the ripe age of four-score years and two, but long before her home-call she had the satisfaction of knowing that two of the pieces in her little book had found a place in a large number of hymn books, and that at least one of them was a popular favourite. The piece which gives title to the volume is now better known as the hymn beginning "The Sands of Time are Sinking"; while another which she entitled "The Substitute," appears in most hymn books as "O, Christ what burdens bowed Thy head!"

Mrs. Cousin was a daughter of Dr. David Ross Cundell of Leith, and was born in 1824. Her father served in the British army for several years, as a surgeon, and was present at the Battle of Waterloo with the 33rd Regiment. After the peace of 1816, Dr. Cundell settled in his native town, Leith, where he died when his only child was just three years old. Mrs. Cundell, after her husband's death, removed to Edinburgh, where she resided until her daughter's marriage, in 1847, to the Rev. William Cousin, then minister of Chelsea Presbyterian Church, London, but who had previously been minister at Duns, Berwickshire. Shortly after her marriage, Mrs. Cousin removed with her husband to the Free Church of Irvine, and it was there, about the year 1856, that she composed her best known hymn, "The Sands of Time are Sinking," a hymn which is now known and used throughout the English speaking world.

The hymn is a selection from a poem of nineteen verses, inspired by a long and loving study of the "Life and Letters of Samuel Rutherford," and founded on the Scottish martyr's dying words, "Glory dwelleth in Immanuel's land." A song of heaven, it deservedly takes high rank, for no other hymn on this theme—so dear to the Christian heart—expresses with such emphasis, the secret joy of heaven's attraction: the glory of the Lamb that was slain.

The pathetic interest of this hymn arises from the story which it tells, and which is one of the memorable events in Scottish history. The cruel persecution meted out to the saintly Rutherford has been ineffacably recorded in the annals of the Scottish Covenanters. Though condemned to die, his threatened fate was averted by his death in prison. He was born about 1600, at the village of Nisbet, in Roxburghshire. The name of Samuel Rutherford will always be associated with "fair Anwoth on the Solway," where for many years he faithfully and fearlessly ministered the Word of God. "On the 27th July, 1636, he was cited before the High Commission Court to answer for his nonconformity to the acts of Episcopsy and his work against the Arminians." his cost him his Kirk and Manse at Anwoth, and he was banished to Aberdeen. Two years later, the Covenanters being successful, he returned to Anwoth, and the following year was made professor at St. Andrews. The Restoration brought Rutherford further persecution. He was again deprived of his offices and a charge of high treason was brought against him. But while the citation was pending there was a more imperative citation served, and in his answer to the demand for his presence, he sent the message: "I am summoned before a higher Judge and judicatory; that first summons I behove to answer; and, ere a few days arrive, I shall be where few kings and great folks come." And from the dark and cheerless dungeon of the St Andrews prison, Samuel Rutherford passed to the glory of Immanuel's Land, on March 20th, 1661. His anticipations were realised; the "summer morn" he longed for had come at last. For, long ere the shadows began to gather, his heart told forth in a joyous and expectant note, the thought which clothes the celestial words—

The bride eyes not her garment.
But her dear bridegroom's face;
I will not gaze at glory,
But on the King of grace.
Not at the crown he giveth,
But on his pierced hand;
The Lamb is all the glory
Of Immanuel's land.

In "The Believers Hymn Book," possibly for the sake of brevity, the first verse, by which the hymn is best known, has been omitted. The lines have a sweet familiarity:

The sands of time are sinking,
The dawn of heaven breaks,
The summer morn I've sighed for,
The fair, sweet morn awakes.

Dark, dark has been the midnight,
But dayspring is at hand,
And glory, glory dwelleth
In Immanuel's land.

So varied are the subjects of the different hymns, and so many hallowed associations cling to a hymn here and there, which gives this and that one a pre-eminent place in our thoughts, that it is never an easy matter to express an opinion as to the best hymn in any particular hymnal. It is safe to state, however, that among the ten best hymns in use among the various assemblies, this hymn takes a very high place. Dr. John G. Paton, of the New Hebrides, in a letter to the authoress, tells of the profound impression it made upon his mind when sung by a large congregation in St. Kilda, Australia, as the old year was passing away and the new year coming in. Mrs. Cousin is the author of that tender hymn:

When we reach our peaceful dwelling
On the strong eternal hills.

The other hymn already referred to has been much used, particularly in home mission work, and was greatly loved by Mr. Sankey, who spoke of it as a hymn "very much blessed." Here is the first verse:—

O Christ, what burdens bowed Thy head!
Our load was laid on Thee;
Thou stoodest in the sinner's stead—
Bear'st all my ill for me:
A victim led, Thy blood was shed;
Now there's no load for me.

In 1860, Mrs. Cousin and her husband removed to the Free Church, Melrose, in which town they resided for eighteen years, living afterwards in Edinburgh, where the gifted authoress died on December 6th, 1906.

Philip said ...
I do love these old hymns - what a wealth of feeling there is.
Modern 'hymnwriters' take note!
Monday, Mar 15, 2021 : 19:38
Marty said ...
Several magazines that list her poetry , call her Mrs. Cousins.
Friday, Oct 29, 2021 : 04:32
GumBoocho said ...
The omissions & revisions in Christian Brethren hymnals, could be a topic for research. Behind them is there a stern censor who insists that the verses have correct theology & that they be appropriate to the Lord's Supper, which should focus on remembering the Lord Jesus? "The Sands of Time Are Sinking" verse does not focus directly on the Lord Jesus & His excellencies; thus I figure that may have caused its omission -- not that there is anything bad in the verse. Of course the long poem by Cousin has verses which are not appropriate to a church service, though they are not bad, verses about a person's personal experience at Anwoth. "The sands of time are sinking", the first verse, however, make this hymn particularly applicable to a New Year's Watch service, so I would prefer that somehow (maybe in a footnote) they had been included for that purpose.
Friday, Dec 31, 2021 : 03:37