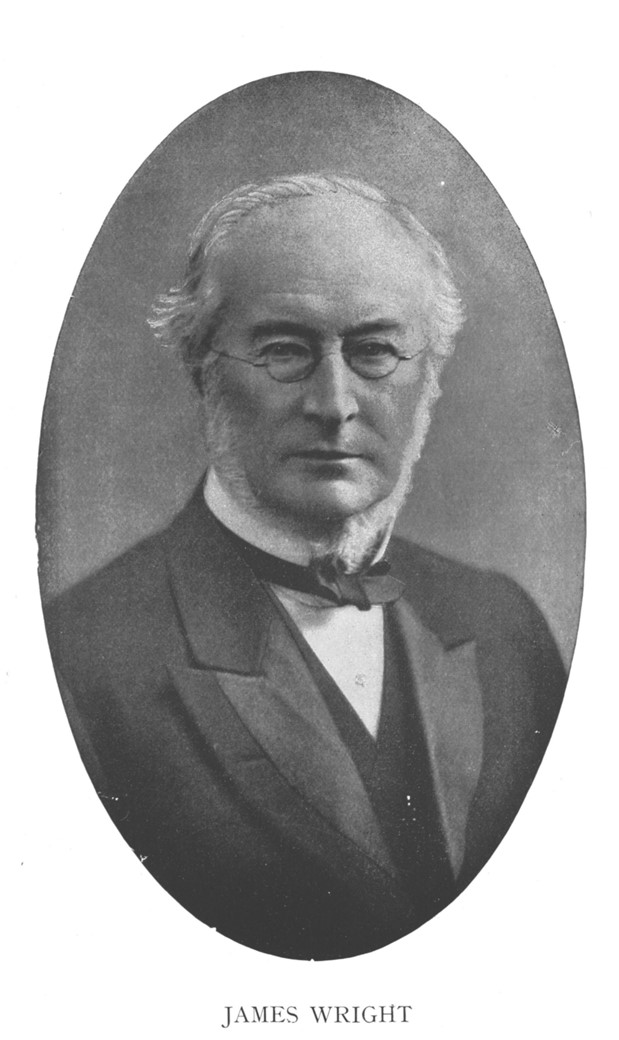 James Wright was born in Bristol in the year 1826. His parents were God-fearing members of the Society of Friends, who brought their children up in "the nurture and admonition of the Lord." The children being "Friends" by birth, regularly attended the Meeting-house, and early in life had instilled into them those principles of integrity which characterise that body.

At the age of 14 the Spirit of the Lord wrought in his heart and showed him that, although born a "Friend," he was a sinner by nature and practice, and needed to be "born again." He yielded, and became "a new creature in Christ Jesus." The new life soon showed itself in love for the Word of God. In recent years he confessed to the writer that the very long pauses in the meetings of "Friends" were turned to account by reading chapter after chapter in his New Testament.

The Lord further opened his eyes to the truth of believers' baptism, and also that it is the privilege and duty of all true believers to remember the Lord's death in His own appointed way by the "breaking of bread." He manifested that obedience to the teaching of God's Word which was ever afterwards a marked feature in His Christian character. He severed his connection with the Society of Friends, and was baptised in Tottenham. In 1840 he returned to Bristol and joined the Church at Bethesda, in which, at that time, Messrs. Muller and Craik were the leading brethren.

On leaving school he went into business. In 1851 he married Miss Ann Willington Hitchins. In 1856 business again took him to London, and he lived in Hackney for several years.

Mr. Wright's earliest form of Christian work was Sunday School teaching. His success in this work was such that in 1856, when he was 30 years old, he became Superintendent of the Sunday School at Paragon Road, Hackney.

In 1859 Mr. Muller, who had known him from boyhood, wrote asking if he would become one of his helpers in the work at Ashley Down. He accepted the invitation, joined Mr. Muller, and remained in the work until his death - a period of nearly 45 years. During the eleven years from 1859 to 1870 he was, to use Mr. Muller's words, "one of the most valuable helpers in the work." After he had been there one year it was impressed upon Mr. Muller's mind that this was the one whom the Lord was preparing to become his successor. For ten years he and Mr. Muller brought the matter before the Lord, and both of them became, to use his own words, "more and more assured that in Mr. Wright God had given to us what we desired."

In February, 1870, Mr. Muller, shortly after the death of his first wife, opened his mind to Mr. Wright, telling him that he considered it to be the will of God that he should become his successor. Mr. Muller wrote: "His great humility, however, found a number of reasons why he con­sidered himself unfit for it, none of which I could allow to stand in the way as a hindrance, as I knew him so well with regard to his fitness. A second difficulty was that his excellent Christian wife considered that he would be greatly burdened by accepting my proposal. After some weeks, however, she yielded her objections if he saw it to be the will of God. Mr. Wright then, after long hesitation, came to the conclusion that it would not be his duty any longer to refuse." Very shortly after this Mr. Wright's wife died; thus within a few months both Mr. Muller and Mr. Wright sustained a similar bereavement.

In August, 1871, Mr. Muller wrote: "To-day Mr. Wright asked for the hand of my beloved daughter. This request was as unlooked for on my part as anything could have been, while at the same time I knew no one to whom I could so willingly entrust my choicest earthly treasure. My beloved daughter had the greatest conflict in her mind for about two weeks before she accepted this offer, her only and great difficulty being because of having to leave me." Mr. Muller told her it would be a joy to him to see her married to such a man, so she accepted the offer, and they were married three months later. In May, 1872, Mr. Wright became associated with Mr. Muller as director.

Between the years 1875 and 1892, during which Mr. Muller went on preaching tours all over the world, Mr. Wright was left in sole charge of the work at Ashley Down for many months together.

In 1890 Mrs. Wright fell asleep after a short illness. Their 18 years of married life Mr. Wright described as a time of "unbroken felicity;" being an intensely affectionate man, he felt her removal keenly; yet he bowed to and worshipped, with childlike submission, the God who in wisdom had taken his loved one from him.

From the autumn of that year he lived with his nieces, the Misses Withy. On March 6th, 1898, the sudden Home-call of Mr. Muller left him in the position of sole director. After he had published his first report, Dr. Pierson wrote of him: "He shows himself God's chosen successor in the work, evidently like-minded with the departed director." After some weeks of waiting on God, Mr. Wright asked G. Fred. Bergin, whom he had known intimately for 25 years, to become associate director. He consented, and for seven years they had intense mutual joy in working together.

Mr. Wright was a man of no ordinary graces and gifts, all of which were joyfully laid at the Master's feet. His beautiful face and radiant smile showed, better than any words possibly could, that peace and joy ruled in his heart. His dignified yet gracious demeanour at once won the respect of all. Of his faith and love his works bear witness, but it may be added that his humility was equally apparent to an observing mind.

As a teacher, he was widely known and deeply appre­ciated; his good memory, originality, versatility, wonderful command of language, and profound knowledge of Scripture impressed and rivetted his hearers. Many sinners have been wooed to Christ by his loving appeals, and thousands of Christians have had their faith strengthened, and their love for the Lord and His Word greatly deepened, by listening to his helpful exposition of the truth.

He was very fond of music, having a beautiful bass voice. For many years he led the singing in Bethesda. It was a great pleasure to him to join with others round a piano or organ, and sing hymn after hymn from the Bristol Tune Book.

Mr. Wright continued in full vigour of body and mind until the beginning of 1905, when he was laid aside with a carbuncle, which led after a time to blood poisoning. The illness lasted a month, and was accompanied by much suffering, which was borne with patience and beautiful submission to the will of God. Just before the end came, Mr. Bergin said to him, "Nearing home, beloved brother!" to which he seemed to assent by a grip of his hand. Shortly after that, at four o'clock on Sunday afternoon, January 29th, 1905, he quietly fell asleep at the advanced age of seventy-eight.