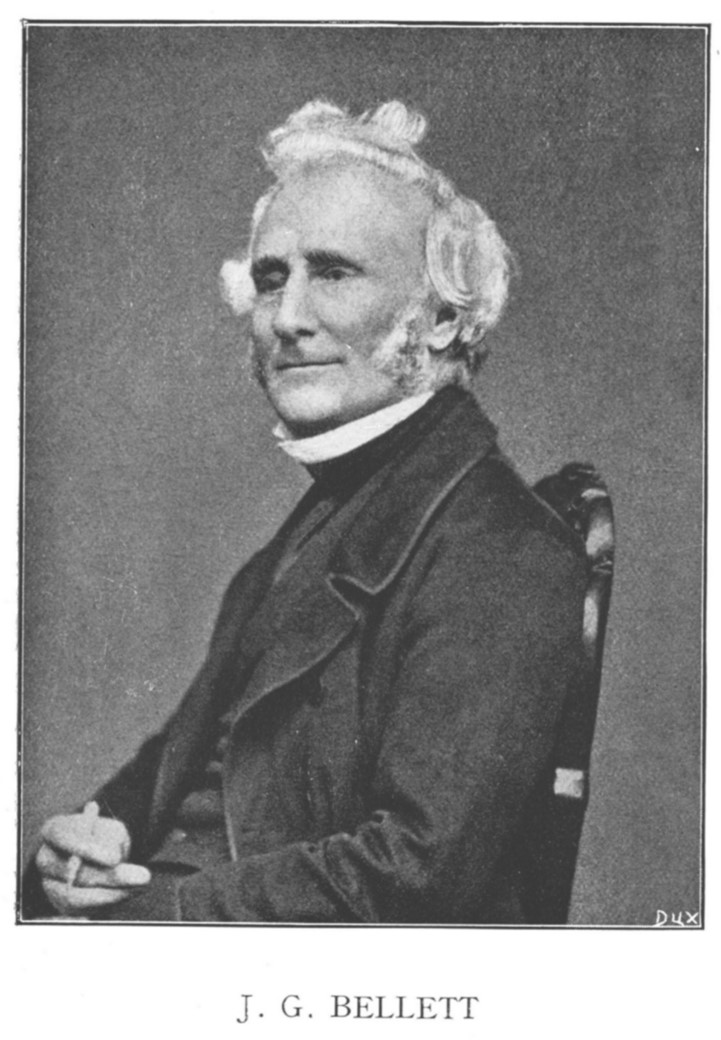 THE name of JOHN GIFFORD BELLETT will always be reverenced and his memory ever cherished by those knowing the unction of his ministry from the products of his pen.

Born in Dublin, in the year 1795, he was of an Anglo-Irish family connected with the Irish Established Church, which lost its status in 1869. He was educated at the Grammar School, Exeter, where he had as a school-fellow William Follett, who afterwards as an eloquent advocate distinguished himself at the English Bar; and from there Bellett proceeded to Trinity College, Dublin, now making the acquaintance - ripening into life-long friendship - of John Nelson Darby. Both were strong in classical scholarship, both read for the Bar - Bellett in London, and Darby in Dublin. Each was "called" in Dublin, and practised but for a short time, Darby relinquishing that profession when he "took Orders," whilst Bellett, who had become a decided Christian during his teens, devoted himself as a layman not only to increased spiritual self-culture but to participation in whatever religious service in those days presented itself to him as a "layman."

By the year 1827 each of these two earnest souls was attending the meetings for the study of prophecy at Powerscourt House, in Co. Wicklow, and becoming detached from the conventional religion of Protestants around them as they advanced in knowledge of spiritual truth. In 1828 we find Bellett "breaking bread" with some friends like-minded - Francis Hutchinson and Edward Cronin, besides J. N. Darby, and, it would seem, Anthony Norris Groves, who had brought with him from England similar, yet independent, convictions. To the end of 1829 their meeting-place was a private house in Fitzwilliam Square, Dublin, but in the year following a public meeting-room was engaged in Aungier Street of that city. John Vesey Parnell (afterwards Lord Congleton) is now found in their company. As between the various names mentioned, the actual priority in giving effect to their common belief is difficult to determine.

When others were called away for active promulgation of their views elsewhere, Bellett remained in Ireland, and Dublin in particular, where his residence was fixed for some fifteen years longer.

In 1846-1848 we find him residing at Bath, and he was not again settled at Dublin until about the year 1854, but thenceforth retained his home there to the time of his passing away in 1864. In 1859 he interested himself in the Great Revival which took place in the North of Ireland. During all these years he exhibited a notable example of lovable Christian tenderness, oft times assuaging the bitterness of conflict in ecclesiastical matters by his counsel and attitude.

Bellett' s public ministry, as described by one who had the privilege of enjoying it during his residence at Bath, was that of one who "talked poetry, " so sweet and chaste were the sentiment and expression. The late R. Govett, of Norwich, a very good judge, who had read all the published writings of the leaders of the movement, gave as his opinion that Bellett was the most spiritual. His best known books are those on the "Patriarchs," the "Evangelists," the "Son of God," and the "Moral Glory of the Lord Jesus."

His name is dear to those who now experience exercise over the continuance of strained relations between brethren confessing common truth. J. G. Bellett's influence was all exerted in the direction of minimising alienation, and fulfilling the injunction, "be at peace among yourselves." Happy is the memory of any with such a reputation as his, of whom it can be said that, so far as is known, nothing said or left behind has been productive of or has aided dissension, but that all has tended towards removal of man-made barriers and the restoration of fellowship of heart in the fear of the Lord.