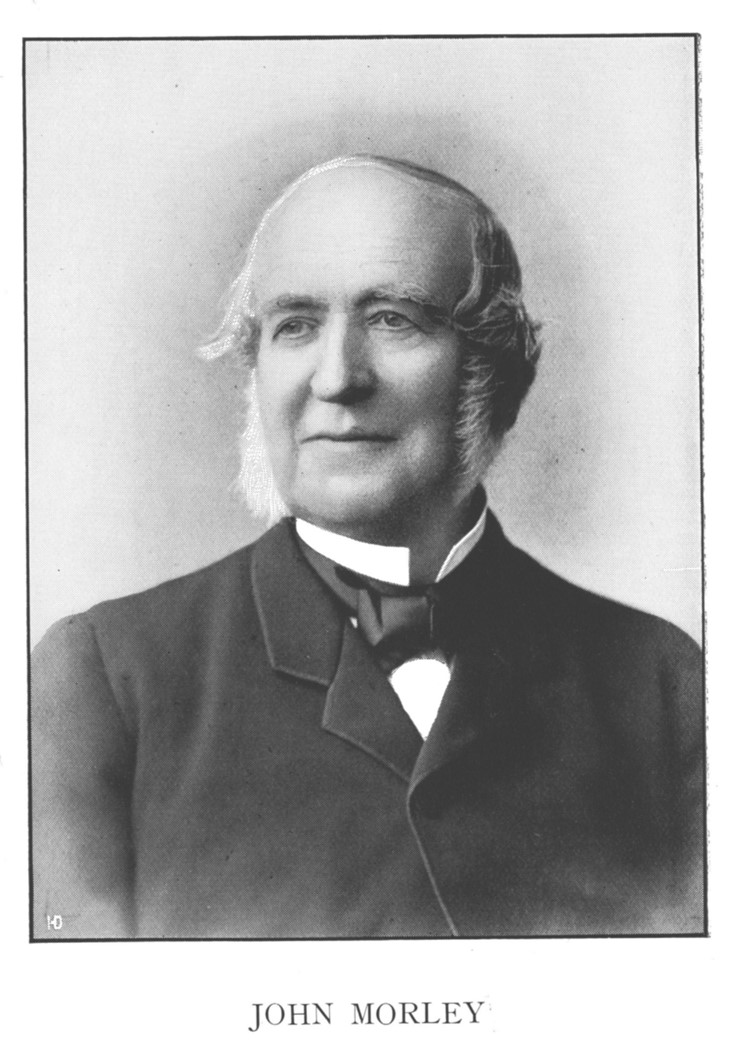 JOHN MORLEY 4th was born at Homerton, Hackney, London, 4th June 1807, and resided in the same parish until his Home-call when close on ninety. He was the eldest of three brothers, the others being Samuel Morley, M.P. for Bristol, whose biography has been written by Edwin Hodder; and Wm. Morley, of Bow, all of whom are now reunited. The gracious love and courteous demeanour of his mother and the unblemished character and cultivated mind of his father had great weight in moulding the early life of their son.

Well known Christian preachers and workers ever found a welcome in the parental home, thus the sons were privileged to enjoy the personal friendship of Dr. Binney, Dr. John Pye Smith, John Clayton, James Parsons, and many others.

On leaving school in 1823 he joined the world-renowned firm of I. & R. Morley, Manufacturers and Wholesale Drapery Warehousemen. Integrity and assiduity marked the thirty-two years which he devoted to the upbuilding of the "House of Morley,"' which, through the exertions of the parents, John and Robert Morley, and their sons, became one of the most prosperous and highly respected in the world's metropolis. His influence over the young men of the house was always very great, and throughout the establishment he was regarded with the greatest respect and affection. On his retirement in 1855 he sent a unique letter to each of the employees, gave £100 to increase the volumes in the library, a family Bible to the porters, etc., in the establishment, in addition to monetary and other tokens of interest in the temporal and spiritual welfare of the various members of the establishment.

Freed from business, Mr. Morley devoted his time to the furtherance of the Lord's work, visiting many parts of Britain and Europe. During one of these tours, in the eventful year of 1859, he paid a visit to Ireland. Met at Kingstown by J. Denham Smith, who had been a guest at their hospitable home in London, who remarked: "You will surely go to the North and see something of the revival," which at that time was spreading like wildfire through many parts of the Emerald Isle. Mr. and Mrs. Morley promised to consider the matter, and next day they set out on what proved an eventful visit. In the midst of the manifestation of the power of the Holy Spirit, they saw the foundation truths of Scripture in a new light, learned much of the Word and will of God, and returned home with purpose of heart to devote more fully time, talents, and all to the service of such a Master.

These remarkable years, '59 to '63, were seasons of gathering in of many men to be afterwards used mightily in the Lord's service, including R. J. Mahony of Dromore Castle, W. T. Crosbie of Tralee, F. C. Bland of Derryquin, Geo. F. Trench, Alfred Trench, Townsend Trench, and T. Shuldham Henry, several of whom were afterwards associated with Mr. Morley in work in London.

Mr. Denham Smith was soon invited to London, and had many fruitful drawing-room meetings in the homes of John and Samuel Morley. Freemasons' Hall was next taken for larger gatherings, and rooms in Wood's Hotel for more private readings. These readings were published under the title of "Life Truths," and have been helpful to thousands, including D. L. Moody and others well known.

Special meetings were also arranged in Brighton, Bath, Croydon, St. Leonards, Liverpool, Shrewsbury, and other large towns in England, as well as Paris and other centres on the Continent. The "Times of Refreshing" Hymn Book owed its birth to the spirit abroad at this time.

In the outreaching to others Mr. Morley remembered the Saviour's injunction, "Go home," so had the Iron Room erected in Upper Clapton. Opened in 1867, it became the birthplace of very many souls. Many men whose names are well known—Denham Smith, Shuldham Henry, C. Russell Hurditch, Howard Johnston, Herbert Taylor, J. G. M'Vicar, Wm. Lincoln, Rice T. Hopkins, H. W. Soltau, Henry Heath, Trevor Francis, and several others—gave help at the services, which continued to be crowded for several years. Then Mr. Morley erected the substantial and more centrally situated Clapton Hall, in Stoke-Newington. Messrs. Denham Smith, Lincoln, Dyer, Morley, and others took part in the opening services in February, 1880. Mr. George Muller, of the Ashley Down Orphan Homes, visited the hall, and helped in ministry.

Though not a great speaker, Mr. Morley's intense devotion to the Lord's work, especially in the Iron Room and Clapton Hall, where his genial smile, friendly handshake, kindly inquiry after body and soul, words of counsel and cheer, and little Gospel booklet have borne fruit, the real harvest of which will only be known in Eternity. For many years he kept the roll-book, which in early Iron Room days had 300 names on its pages, running up at one time to 800 in Clapton Hall. Two or three friendly hives-off and other circumstances have reduced the number, but a goodly number still hold forth and abide loyal to "God and the Word of His grace."

Strange to say, for a number of years the question of baptism had not much exercised the mind of Mr. Morley. A remark by Mr. Theodore Jones so impressed him that he searched the Scriptures, and saw it to be the will of God. Along with his beloved life-partner he was immersed at Tottenham, receiving John 12. 26 as his text. Needless to say, a baptistery formed part of the new Clapton Hall, and many have more fully realised the truths of death, burial, and resurrection (Col. 2. 12) through being immersed therein.

Regularly found in his place "upon the first day of the week, when the disciples came together to break bread" (Acts 20. 8), he realised the true centre. One Lord's day morning in the Old Iron Room he remarked to Mr. A. M. Kyd: "We don't come here to remember one another, or to remember our work, but to remember Him."

In addition to encouraging oral ministry of gifted brethren and heralding forth the Gospel message, Mr. Morley loved to scatter the printed page. Enormous quantities of books, leaflets, monthly papers for saved and unsaved were sent forth. Many thousands of the Herald of Salvation have been scattered over close on forty years, during which the monthly numbers have been regularly supplied. Such plentiful sowing must produce a rich harvest. Nor did he leave the scattering to others. Personal testimony and dealing with souls were classed amongst his greatest joys. He used to quote his favourite text—John 3. 16—and then say, "God loved—God gave—I believe—and I have."

Years continued to fly past. The death of Mr. Samuel Morley in 1886, Denham Smith in 1889, Shuldham Henry in 1893, Dr. Lazeron in 1894, followed by F. C. Bland and other veterans, left a deep impress upon our brother. For two or three years his health gradually failed until the opening moment of the year 1896, when he "slept in Jesus," his last words being, "My Saviour, my Saviour!" On 8th January the mortal remains were laid beside those of his brother and other members of the Morley family in Abney Park Cemetery, awaiting the Victor's "shout" and resurrection "re-union" to be "for ever with the Lord."

Nick Fleet said ...
In his 'Chief Men..' account, Henry Pickering says "the 'House of Morley,' which, through the exertions of the parents, John and Robert Morley,..." By 'the parents', he means the parents or founders of the company (I. and R. Morley) but John's brother was Richard, not Robert, so I think that was a mistake. As to why it is "I." and not "J." in the Company name, I can only assume it may be because in Latin a 'J' was written as 'I'?
Wednesday, Mar 11, 2020 : 19:15
Timothy Stunt said ...
Well spotted! I've never noticed the erroneous use of 'Robert' for Richard! Your surmise about I and J is warranted. The use of I for J was still common in the early 19th century. In the index of my 1819 edition of Gibbon's 'Decline and Fall of the Roman Empire' the letters I and J are grouped together, with 'idolatry' preceding 'Jerusalem' which is followed by 'Ignatius', followed by ' John'. Even as late as 1838, an article on 'Sacrifice' in the 'Inquirer' by the editor, John Eliot Howard, was signed 'IEH'. Timothy Stunt
Friday, Mar 13, 2020 : 03:24