Reading the intro to the T. Shuldham Henry book I just put up, I thought I would look a bit into "Clapton Hall". The hall was build for the Brethren by John Morely, and opened in 1880 in the area called Upper Clapton. For those who don't know London this is in a northern suberb of the city, now probably described as part of Stoke Newington. It is not too far from Arsenal and Tottenham football clubs if that means much to anyone, or better still Abney Park cemetery is close by. At the time of building though it probably wouldn't have been considered part of London proper.

Here is a picture of it in it's glory days from an old postcard I purchased; 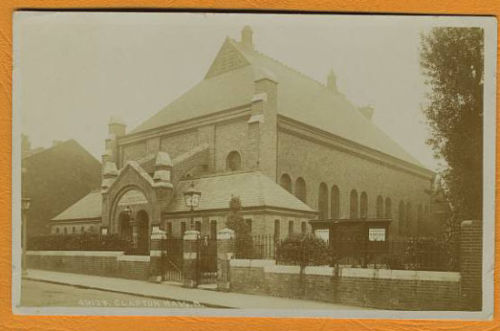 Some information on the origin of the hall is found in Beattie's "Brethren, The Story of a Great Recovery",

"About the time alluded to in the preceding chapter, the tendency appears to have been to remove farther out of London, and many were transferred to the Iron Room, Clapton. At a later date, as numbers increased, the need of greater accommodation pressed itself upon the Iron Room Assembly, but this exigency was generously met by John Morley, who erected the substantial building known as Clapton Hall. It was opened for public worship in the Spring of 188O, many well-known brethren being present on that occasion.

Mr. Morley, to whom reference has been made, was a prominent city business man, whose untiring activities in the service of the Master, during a long and useful life, are still remembered, particularly in connection with the building up of local assemblies with which he was more directly associated. Though not specially gifted as a speaker himself, he was constant in encouraging those brethren whom God had marked out as ministers of the Word, On retiring from business Mr. Morley visited many parts of Britain and the Continent, devoting his time in the furtherance of the Lord’s work, During the ‘59 revival he crossed to Ireland, where, having joined his friend, J. Denham Smith, he exerted his whole energies in the work of soul-winning.

Of a gracious and benevolent disposition, “his genial smile, friendly handshake, kindly enquiry after soul and body,” invariably supplemented by words of counsel and cheer, left a lasting Impression upon those with whom he came in contact. Though his interests were many, he ever showed an intense devotion to the work in the Iron Room, and later at Clapton Hall, where for many years he kept the assembly roll-book, which in the early days showed the names of three hundred members, rising at one period to nearly eight hundred.

Relative to the opening of Clapton Hall, I came across an interesting entry in the diary of John G. McVicker, who, during the second half of last century, laboured much amongst assemblies of the Lord’s people throughout the country. He was a frequent visitor to Clapton Hall, and for some time was constant in ministration there. Under date 25th March 1880 he wites: “I baptized twenty in Clapton Hall last night. Mr. Denham Smith was to preach the first Sunday in that hall. He was taken ill and it was I who preached. Now I have conducted the first baptism and I was also used in the first conversion that took place in it. My heart is being more knit to the work and the people here, and I think I am being fitted for the work and helped in it. I believe I am where God would have me be.”

A perusal of the diary he kept leaves with the reader a sweet fragrance, touching the prayerful thought and care he lovingly bestowed upon this assembly in the closing days of his life. On the last day of December, 1899, being Lord’s Day, Mr. McVicker gave a brief word of ministry at the morning meeting on “A Faithful God,” and in the evening preached the Gospel to a large congregation. This proved to be his last public ministry on earth. On the day following—a few days before his home-call—we find this entry: “Breakfasted in bed because of chest cold and foggy, chilly weather. Judged it safe to stay in the house all day. Spent some time in prayer to God in Christ’s name—a wonderful thing to be able to do. Being detained by weather (and ill-health) from attending the prayer meeting in the evening I went over the names of all in fellowship at Clapton Hall, interceding for them as I was helped.”"

From http://brethrenhistory.org/qwicsitePro/php/docsview.php?docid=412, we learn a bit more

"This assembly was originally opened as the Iron Room on 1 November 1867 and replaced by Clapton Hall on 1 February 1880. It is interesting to note that many prominent men associated with the Christian Brethren were in fellowship in this assembly, including Henry Soltau, Dr. Frederick Baedeker, Hudson Taylor (founder of the China Inland Mission), Alexander Grant (a missionary in Singapore), Thomas Newberry, Robert Chapman and Dr Arthur Pierson."

This article also says C.R. Hurditch was a prominent member there.

Papers related to Clapton Hall are held by CBA in Manchester, their introduction is also useful, link

Fellowship meetings had been taking place for some time at various locations around the neighbourhood of Stoke Newington in London and also in the home of Mr and Mrs John Morley among others. As numbers increased, it was decided that there was a need for a building in which the growing Assembly could meet. On Friday 1 November 1867, the building known as the Iron Room opened in Hill Street and the first fellowship meeting took place there on Sunday 3 November 1867. Within twelve years, the number of people attending for fellowship had risen to 411 which led to the need for a larger meeting space.

Clapton Hall in Stoke Newington held its first meeting on Sunday 1 February 1880 and on 19 June 1880 Mr John Morley granted the tenancy of Clapton Hall for Brethren Fellowship. By 1888, the number of people attending the meetings at the Hall had increased to 728. The Assembly continued to meet regularly and celebrated 50 years of fellowship in 1917, but because of the First World War, the service to mark this event did not take place until 21 June 1919. During the Second World War, the Assembly had to relocate to The Ferry Mission when the Civil Defence commandeered Clapton Hall for a period of 18 months.

Clapton Hall continued to be used by the Brethren for fellowship and on Saturday 9 April 1960 a meeting was held to mark the 80th anniversary of its opening. Seven years later, the centenary of the Assembly which started at the Iron Room in 1867 was marked by a service on Saturday 15 April 1967.

A History of the County of Middlesex: Volume 10, gives a picture of how large the gathering there was, with several hundred people in attendance.

It seems it lasted as a church building in some form until the mid 1990s, whereupon an application was made (and I assume aproved) to convert it to flats; See here

But still the conversion has mantained it's original character to some degree, here is a picture from Google Street View of what it looks like now,

Jon Lindberg said ...
Why do you use such a faint font for your text? It makes it very hard to read and discourages one from reading it.
Thursday, Feb 14, 2019 : 04:25
Tom said ...
Um I assume you refer to the Blockquotes which are slightly lighter to set them out. This is a standard practice in Web standards, and although it is lighter, it is perfectly legible - I have a proper colour calibrated monitor, and it is a lot less bright than standard setups, so I can be sure of this. Maybe your contrast is set too low, or something else wrong with your display setup?
Friday, Feb 15, 2019 : 07:03
Dawn said ...
I used to attend Clapton Hall Sunday School along with my two sisters and brother back in the early 60s. I have many vivid and happy memories.
Sunday, Dec 1, 2019 : 12:40
Tim said ...
Interesting that the conversion is named 'Ark Court'. I wonder whether the developers confused this building with the church not far away known as the 'Ark of the Covenant', built for the Rev Henry Smyth-Pigott, who was linked with the Agapemonites. When I saw it some years ago, it had been taken over by the 'Liberal Catholic Church'.
Monday, Mar 30, 2020 : 21:58