The London by Moonlight Mission 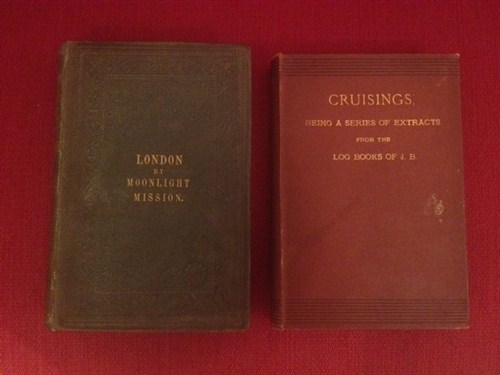 One of my favourite books in my collection is a volume entitled "The London by Moonlight Mission", by the Lieut. John Blackmore, published in 1860.  John Blackmore, born in 1815 into a godly home, left that environment to enlist in the Royal Navy when maybe thirteen years old.  As might be feared the young man fell into every kind of sin in such an environment, and soon forgot the warnings and exhortations of his Christian mother.  Despite this though, the fragility of life at sea, frequent deaths of the sailors etc, would intermittently touch his conscience about his own need of salvation.  Promoted to the rank of Lieutenant around the age of twenty, his career in the Navy continued until he was involved in a freak accident, whereby an explosion on his ship whilst docked on home shores, nearly killed him, and left him in hospital for over a year.  This by grace proved to be the turning point of his life, and coming to faith in the Lord Jesus, he committed the rest of his life to the service of the gospel.  I think by now he would have been approaching, if not, thirty years old.

The work he committed himself to was to help in a small way the multitudes of young women who fell into sin on the streets of London, by providing them a way of escape, shelter and food, until they could find suitable employment.  Through this work, countless lives were delivered from the service of Satan and many of these young women brought to faith in Christ.   It must be remembered that at that time there was no housing benefit, no social security, and if a woman, maybe through no fault of her own, lost her 'situation', she could be thrust into the utmost peril, homeless and destitute.

This work was well supported, and I believe Mr Blackmore must have come in regular contact with the early 'brethren', if not even meeting with them as I have a second volume published by Morrish some years later, entitled 'Cruisings, Being a series of extracts from the log books of J.B.'.  In this, if I remember, he notes that Mr Darby and Mr Wigram both financially contributed to his work.

Below is a brief summary of the work, extracted from the first book, which I would recommend reading to anyone.  It certainly touched my heart in the necessity of helping the poor and the potential to reach people for salvation this way.  Here is also a link to a PDF version of the book.

' During the last thirteen years, Lieut. Blackmore has been actively engaged in endeavouring to rescue from temporal and eternal ruin some of those un-happy girls who are found thronging the streets of London by night; and also in distributing suitable tracts to the male sex, their co-partners in sin.

His endeavours to be helpful in this Christ-like work began in simplicity and weakness, by merely putting his hand to that which he found to do. It was God's will to prosper and bless; so that from one or two stray ones gathered out of the streets, two large houses are now ﬁlled.

One young person having been met with, who was desirous of forsaking her life of sin, a lodging was taken for her in the house of a poor Christian widow; in a few days a second wanderer was added to the family. Soon a small house was taken, then a larger one-God having inclined the hearts of his people to help by their prayers, and with their silver and gold. This home is known as "The London Female Dormitory and Industrial Institution," 9, Abbey Road, St. John's Wood, N.W.

As the number of applicants multiplied, amongst whom were many who had received a superior education, it was found desirable to have a separate home for them; which was opened in the beginning of the year 1853, and is known as "The Female Temporary Home," 218, Marylebone Road, N.W.

Both houses are conducted in the spirit of a family home. The inmates are kept constantly employed throughout the day. As regards discipline, there is no probation, no cutting off of hair, no livery, no locks or bolts in the day-time; but the young people are treated as fellow beings, over whom the blessed Lord yearns with compassion. They are allowed occasionally to walk out for exercise, two or three at a time, under the care of one of the matrons. They have also the privilege of attending places of worship thus accompanied. The Scriptures are read every morning, with prayer, and almost every evening some Christian friend interested in the work comes to read or speak to them from the Word of God.

There is no stated time for their remaining in the homes; the period averages about nine months; their removal depends upon their ﬁtness for service.

There is nothing in the exterior appearance of the houses whereby they could be pointed at as a refuge: consequently a poor unhappy wanderer is not ashamed to apply at the door, and when admitted pour out her tale of sorrow into the ear of one who sympathises with her.

Infants are not received into either of the homes. This, in many instances, has prevented young women from entering. An asylum for them has long been thought of, in the mean time, rather than an applicant should be refused admission, the child is placed­ under the care of a respectable person, until the mother is able to support it. In this manner about twenty children and their mothers have been provided for.

The beneﬁts of these are not conﬁned to natives of London; but extend to young women from the country and provincial towns, and sometimes cases are received from the continent.

It an important feature of Lieut. Blackmore's operations, we must not omit to mention that the "Female Temporary Home" is not exclusively for fallen females; but also for the prevention of sin and suffering, by  shelter and support to young women who may be for a short time out of a situation, or without employment, either at a small charge, or entirely free,  to the necessities of the case, or the state of the funds; and thus affording means of deliverance from the snares that abound on every hand in the metropolis. Many young ladies, who-through loss of parents and friends, or other adverse circumstances-are reduced to the utmost extremity of need and peril, ﬁnd a home here until occupation suited to their abilities be provided. They are not compelled to associate with the other young women, but live with the matron. The good done in this department of the work, the great day of the Lord will alone reveal.

Timothy Stunt said ...
Several pamphlets, entitled 'London by Moonlight; or Missionary labours for the Female Temporary Home' were published in 1853 and 1854, the first of which received a favourable review in the 'Missionary Reporter' edited by James Van Sommer (i [1853] 57-59.) Van Sommer's sister was married to W.T. Berger and, together with Philip Gosse, George Pearse and others, Van Sommer and his brother-in-law were associated with the little Brethren assembly in Hackney during the 1840s. It is about fifty years [!] since I pursued the rather scanty information about Van Sommer in the 'Journal of the Christian Brethren Research Fellowship' xvi (1967) 2-8, but the encouraging review that Van Sommer gave of the London by Moonlight Mission in 1853 suggests to me that John Blackmore was closely associated with some of the Brethren from the very outset of his work.
Timothy Stunt
Friday, Sep 9, 2016 : 17:01
Tom said ...
Thanks, very interesting as always! I really like Blackmore, found reading those two books compelling. Would be fascinating to have more information on philanthropic work among the early Brethren .. particularly the Exclusive section.
Saturday, Sep 10, 2016 : 20:09