A Visit to Tunbridge Wells

Last week, I took the opportunity of a sunny day to go and take some pictures in Tunbridge Wells. TW is a historic spa town in Kent, about 30 miles from London, full of beautiful architecture, as well as being rich in Christian and particularly Brethren heritage.

B.W. Newton is buried at the cemetery, having lived the last 3 years of his life in the town. Also buried there are many members, both of Exclusive and Open assemblies; those of particular interest are John Ashton Savage, William Masters Sibthorpe, his son, William Earl S., as well as many others in the Sibthorpe family, Augustus Pemberton Gipps, the brother-in-law of William Kelly, who had himself a very interesting life, amongst others. These all had impressive houses in the town too, as did Walter Turpin who lived there from around 1886, first in Medwyn Villa on Queen's Road (just two doors up from J.A. Savage!), then after a few years he moved to 47 Upper Grosvenor Road, before moving again in the early 1890s to 15-17 Park Road, where his wife also ran a Ladies School. All three houses of his were within a few minutes walk of each other, so I was left wondering what made him move considering the upheaval it must have been each time! Tunbridge Wells would also be the place where W.T.T.'s Brethren career terminated in the mid 1890s, and he was briefly incumbent at Salem Chapel in 1896 before he moved to Eastbourne.

It is impossible to know exactly when Brethren first came to Tunbridge Wells, but in the 1873 address list, an assembly there is noted, but with no address given for the meeting though the addresses of two brothers are provided. This probably meant the assembly was re-locating from one temporary place to another at the time. In the 1877 book, they are listed as assembling in the in the Mechanics' Institue, in the 1880 book, in the "Friendly Societies' Hall", and in 1882 in the Temperance Hotel. Clearly for whatever reason no permanent hall had been taken at this point. 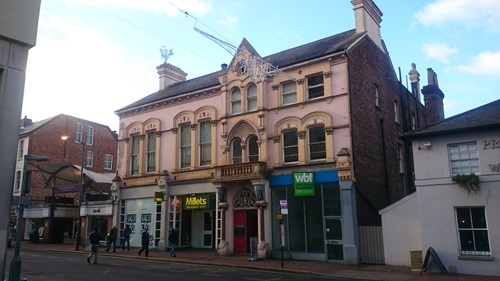 I do not know where the Brethren met throughout the remainder of the 1880s, but in 1890, the meeting was split over the 'Raven teachings', and a number left, led by W.M. Sibthorpe, who purchased the lovely room at 41 York Road for the brethren with him to assemble in. This hall would become the scene of the Tunbridge Wells Division in 1908 after the bullying of C.E. Strange by the Sibthorpe family. Napoleon Noel writes of Tunbridge Wells in 1890, that a partisan of F.E.R.'s , named G. Boddy, was received there by F.E.R.'s supporters, which led to the division.

Where those who remained with F.E.R. met is less clear, though I assume there was a substantial number of them as the meeting would have contained at least the Turpin, Savage, and Gipps households, as well as many others. All we know is that in 1903 these brethren moved to Salem Chapel on St. Johns Road where they stayed until 1934 before moving to a room in Hill Street, which has only just closed. 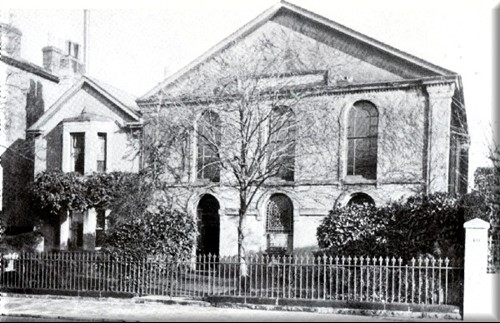 A picture of Salem chapel taken from this page.

The history of Open Brethren in the town is less clear, in the 1904 list they were meeting in the Town Hall, labelled as a 'Temporary venue. in 1924 they moved into Culverden Hall which remains to this day though it is now an Evangelical church. George Goodman, the well known conference speaker and writer was in fellowship here.

In the 1889 Hepworth's Annual, Brethren are listed as having a hall opposite the "Friendly Societies' Hall" with meetings at 11am,, and 6.30pm (not mentioned in subsequent directories) and a hall on Vale Road with Breaking of Bread at 11am and a Gospel meeting at 6.30pm.  In Pike's 93/94 & 94/95, the Vale Road room is listed again and designated as 'Plymouth Brethren'. In the Spa Guide to T.W. [nd?], Plymouth Brethren are listed as meeting on Grosvenor Park. In Kelly's for 1898, a Gospel Hall is listed on Quarry Road. In "A History of Non-Conformity in Tunbridge Wells", the author states the hall in Grosvenor Park was probably Grosvenor Park Hall, number 66, and that a "Miss Woodfall erected a hall at 35-37 Quarry Road for Gospel services which appears to have been in use from 1898 to 1919. The Brethren also appear to have met at Camden Hall Mission Room in 1886 and at 10 Vale Royal in 1893".

Tunbridge Wells has many other churches and monuments, including this one to the time when George Whitefield (two days ago it was actually the 300th anniversary of his birth) preached at the opening of Lady Huntingdon's New Chapel on July 23rd 1769. He Preached from Genesis xxviii i7 "This is none other but the House of God and this is the Gate of Heaven In the evening the congregation being too large to be contained in the Chapel he preached out of doors from a mount in the Court before the Chapel after which he gave a general exhortation and next day administered the sacrament and preached from 1 Thes 2:11,12." 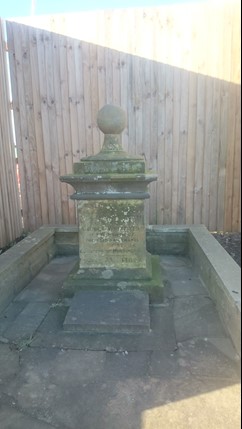 The inscription reads, "Near this spot stood and preached that eminent servant of God George Whitfield at the opening of the original chapel built by Selina Countess of Huntingdon July 23rd 1769." Nice old pictures of the church can be seen here. It was demolished in the 1970s to build a hospital, which the writer of the article with the pictures calls an 'act of vandalism' by the local authorities! The hospital itself has now just been demolished and flats will be built there, as happens everywhere these days!

Pictures of the graves and houses mentioned at the start of this article can be seen on my "Places" page.

Sosthenes said ...
You mention the meeting in Hill Street.

Those who meet there include some who have a real love for the gospel. (I say that it is one of the best companies to preach to!

The hall was becoming less serviceable. It needed a lot spent on it, and perhaps more importantly parking was almost impossible.

As at June 2015, the company is meeting in a community hall in Groombridge, but is looking for a permanent building for its sole use.