Reading the Word of God, an Etching 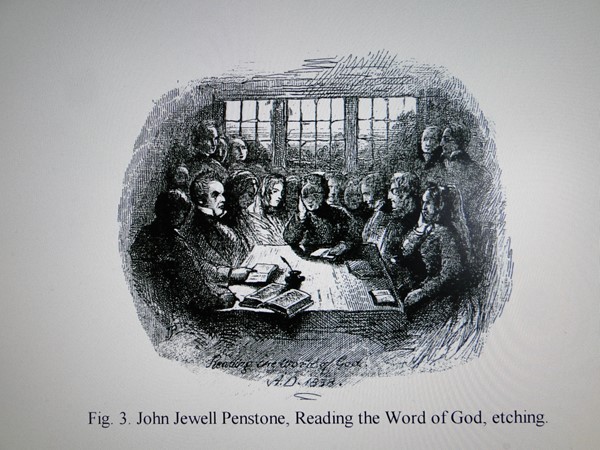 Most of us are probably familiar with the picture above; It shows how an early Bible Reading may have taken place. I had assumed it was somewhat 'apocryphal' in the sense of not representing an actual meeting that took place. Our friend Timothy Stunt, in "The Elusive Quest .. " tells us;

Of rather greater interest is the fact that one of the author's [Penstone's] etchings is a picture entitled "Reading the word of God A.D. 1838:' In the picture it has sometimes been assumed that one could identify J. N. Darby, S. P. Tregelles, Lady Powerscourt, as well as some others, and that this was one of the Powerscourt conferences, but the owners of Powerscourt House in the late 1960s (before Powerscourt was gutted by fire in 1974) assured me that there was no window in the house like the one in the etching.The fact that the picture is dated 1838 and the fact that Penstone's earliest association with Brethren dated from 1836 (the year of Lady Powerscourt's death), makes her pictorial identification very much less probable. If this picture can be associated with the tradition of conferences associated with Powerscourt, the date would suggest the series of meetings in the Gloucester Hotel at Clifton in June 1838. However, the fact that it is the work of John Jewell Penstone gives an added piquancy to the fact that his son produced the only portrait known to us of John Nelson Darby.

But I have been given some interesting transcripts of letters by Miss A.M.S. Stoney that shed more light on this picture and the figures represented;

A copy of Miss A.M.Stoney’s LETTERS

I thank you for answering my letter and for the interesting enclosures. It ie very kind of you not to be displeased at my anxiety to authenticate the little picture, which possibly was copied from mine, or mine from it, but mine is an etching done before photographs were known. There is a tendency to put wrong names to things and I suppose when I am gone there is no one who could go further back, as far as memory is concerned, and I have no way of proving what my memory holds true. I have copied the last letter up father received from Lady Powerscourt in 1836 when he was 22 and had gone into seclusion with Mr. Squire to study the Scriptures together their days (and nights too often) were marked out for reading and prayer. I think that was the last of the Powerscourt readings, as they were called, for she died that winter and your picture is dated I838 and so is mine. The lady in the bonnet was I think Mrs. Cumming, mother of Mr. Foley, — if you know who I mean and sister-in-law to Mr. Wigram. Last year they printed a little book with J.N.D. to it — the moment we read it we all said, “he never wrote that.” I tried to find its origin and the brother who had it printed kindly told me that Mr. Derby had told the incident to a brother long dead, who had told it to a brother who wrote it down. This nice little book that you send me today appeared in the April number of “Helps”** last year, and in the June number you will find the correction that it was written by A.R. not J.N.D. I suppose Mr. Rossier of Perie, not the younger one who lived in Switzerland.

I am glad to hear of Mr. and Mrs. Hutchinson, I hope he is pretty well, — I em sure you are having a good time. I should like to be sharing it, but I am nearly at the end of my traveling days, and my generation is passing away very quickly. With most affectionate greetings to them, and many thanks, believe me.

P.8. The questions proposed to study show us how they were seeking light — their constant prayer was, “Oh Lord enlighten us by Thy truth, and give us faith to walk in the light of it.

I thank you for the photo, which is very nice and quite the same as mine, except that I think that they here tried to mend the patch on Mr. Darby’s bad eye, and it is not like his mouth. I suppose the book of poems you refer to would not afford information as to the persons in the drawing. I wonder if Miss Scott would lend it to me? The deaf sister leaning on the table was certainly not Lady Powerscourt. I believe it was in her (the dear lady’s) house at Leamington and they were chiefly English brethren from these parts. Sir Edward Denny and his sisters lived in Gloucestershire, and the Wigrams and the Belletts used to be often with them. The tall figure standing up by J.N.D. in more like his friend Captain Percy Hall of Hereford, and the far one near him is not unlike Sir Ed Denny. You cen see that it is a humble little place. Powerscourt is a magnificent mansion. Miss Wigram and I went through it once, and we asked them to show us the room where the meetings were held, a very fine room with gallery around it, but there was no meeting there then 1838. For the young heir came in, in 1836 and I believe Lady Powerscourt died that winter.

As to the   “Praise of Man” If you take “Helps”** you will find a little note about it in the number for June 1914. It says A.R., and I thought it light be Rossier; there was an old brother in Paris long ago. Not the one who wrote "Lord e’en to death Thy love could go"; in one book we know him as a Med Student, but this is only surmise. I do not know whether you are a man of leisure, or a reader, but if ever you come to Matlock I will show you some old things. I have been giving them away lately feeling that my course is nearly run.

Yours affectionately in tho Lord.

Here are the tyypescripts which this was taken from;

This is most interesting — particularly the reference to Mrs [Elizabeth] Cumming (more correctly spelt Cuming, née Bligh) who was a younger sister of Frances Bligh, the first wife of George Vicesimus Wigram and who was married in 1828 to John Cuming, a barrister who died in 1831. When Miss Stoney adds the words 'if you know who I mean' it is because Mrs Cuming remarried in 1838 and became Mrs Elwin. Clearly Miss Stoney was careless when she said that Mrs Cuming was the mother of Mr Foley. In fact she was the mother-in-law of Edward Foley who married her daughter Elizabeth Fanny Cuming in 1850. It is most useful to have a further reference to the previously unmentioned Edward Foley (1807–94), an incomplete account of whom I established in my Elusive Quest p.201 n.27. That he was married to a niece of GVW's first wife may explain why his youngest son was called Frank Wigram Foley.  Thanks, Tom, for sharing this material.   Timothy Stunt.