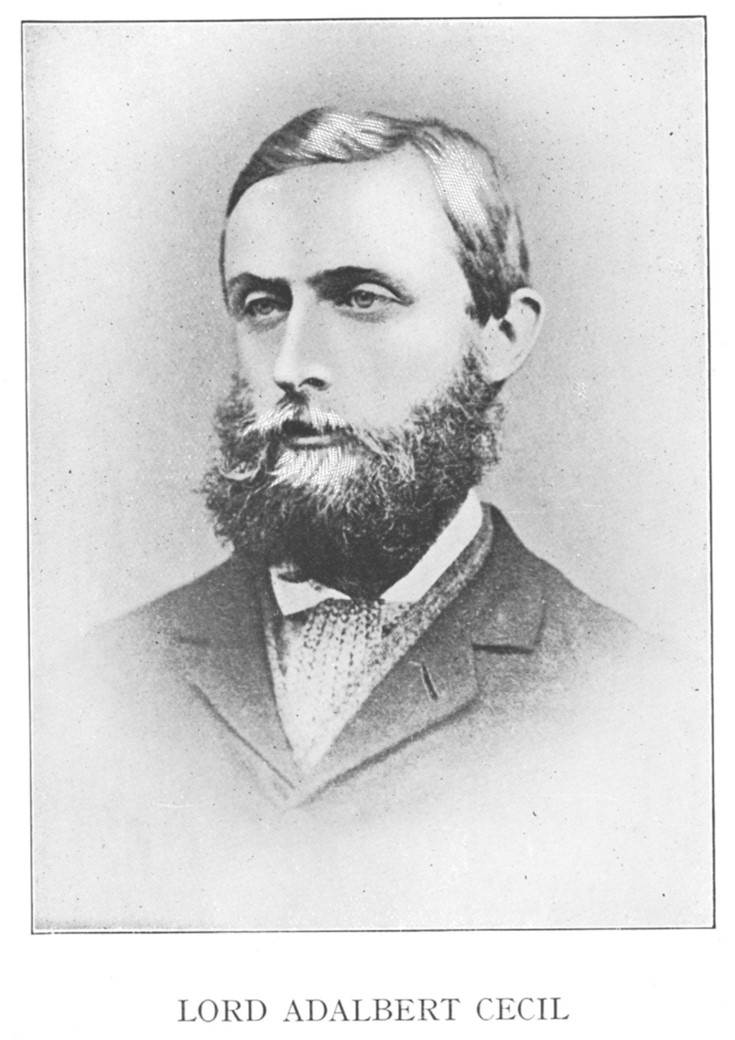 LORD ADALBERT CECIL, son of the second Marquis of Exeter, was born 18th July, 1841. Little is related concerning his early boyhood, but as a young man he seems to have come under the influence of the wellknown missioner, Rev. WILLIAM HASLAM, the conversion story in one of his books entitled "Lord A " referring to Lord Adalbert.

After his conversion to God he made rapid progress in Divine things, becoming an earnest evangelistic worker and one able to minister the Word to profit. In his position he was free to devote all his energies to the work nearest his heart, and so was "always abounding in the work of the Lord" (1 Cor. 15. 58).

His desire ever was to be treated more as a member of the Heavenly Family than as connected with the noble and great of earth. He mixed freely with rich and poor saints, being at home with the former, and by grace proving himself equally at home with the latter. He was thus a living manifestation of that beautiful blend so seldom seen on earth—a combination of a true gentleman by "birth" and a Christian gentleman abounding in love and lowliness by "new birth" (John 3. 3).

A veteran who worshipped and worked with him gives this testimony: "Lord Adalbert Cecil was one of the most godly men we have ever known. Christ mastered his being. Rank, title, wealth, influence, society, and all that is valued in the world were cheerfully surrendered and laid down at the feet of his beloved Saviour and Lord. His intense earnestness and almost absolute devotedness to the interests of Christ, His unbounded generosity, especially to the members of the Household of Faith, along with a rare combination of humility and Christlike-mindedness were conspicuous traits of a truly beautiful Christian character.

"On one occasion we were fellow-travellers. On leaving the train Lord Cecil lifted our bag and his own as well. 'I cannot allow this, my lord. It would be my duty and privilege to carry your bag.' His hearty, gracious answer was just like the man, 'Come away, brother, come away.'

"The grace of God has wrought mightily in this world. Lord Cecil was in himself a bright and noble witness and exponent of an experimental Christianity."

After some years' service in Britain he went to Canada to help further the work of the Lord. Here he was called to higher service in a tragic manner, as the newspaper report indicates:

"Lord Adalbert Cecil was drowned on 12th June, near Adolphustown, Western Canada, through the upsetting of his boat as he was crossing the Bay of Quinte to regain his camp. Lord Adalbert relinquished the attractions of aristocratic society in England and devoted himself to evangelisation work in the Far West. On Tuesday, 11th June, 1889, he took a boat at Belleville, and sailed to a place where there were a number of Indian believers in whom he was interested. On returning for Picton the next day the wind blew strongly, and the boat, which had two sails, was difficult to manage. He was accompanied by a young man named Churchill, and they had nearly reached their destination, when, one of the sails requiring adjustment, Lord Adalbert stood up to arrange it, and, losing his balance, he fell overboard. He might have gained the shore, which was only about one hundred yards distant, but he continued to swim after the boat, fearing, it is supposed, that Churchill might be lost, so that in death, as in life, his thought was altogether for others, and not for himself. He had but little strength (his health having for some time been a source of anxiety), and when he sank, which he shortly did, he never rose again. His life no doubt went out at once, a life of exceptional loveliness, of self-sacrifice, and of incalculable usefulness; and having 'turned many to righteousness,' he is one of those of whom it is said, that they 'shall shine as the stars for ever and ever!' " Thus in death, as in life, Lord Adalbert Cecil manifested the true spirit of one who has truly learnt the meaning of the words, "The Son of God who loved me, and gave Himself for me" (Gal. 2. 20). May many such, rich or poor, be raised up to glorify God.

Newspaper articles about his death (e.g. this one) and the National Probate Calendar also say "Adelbert".

Curiously, in the list of Lord Exeter's children at The Peerage Adelbert isn't even mentioned ...

Wednesday, May 23, 2018 : 06:08
Nick Fleet said ...
Interesting to see that one of APC's executors was Thomas Hinde Thompson of Sundridge House, Bournemouth, where JND died. THT crops up in connection with other families among brethren but doesn't seem to be related to hymn writer Miss Ceuta Thompson's family.
Thursday, May 24, 2018 : 13:58
Tom said ...

Pictures of the grave; https://www.findagrave.com/memorial/151207034/lord_adelbert-percy-cecil/photo 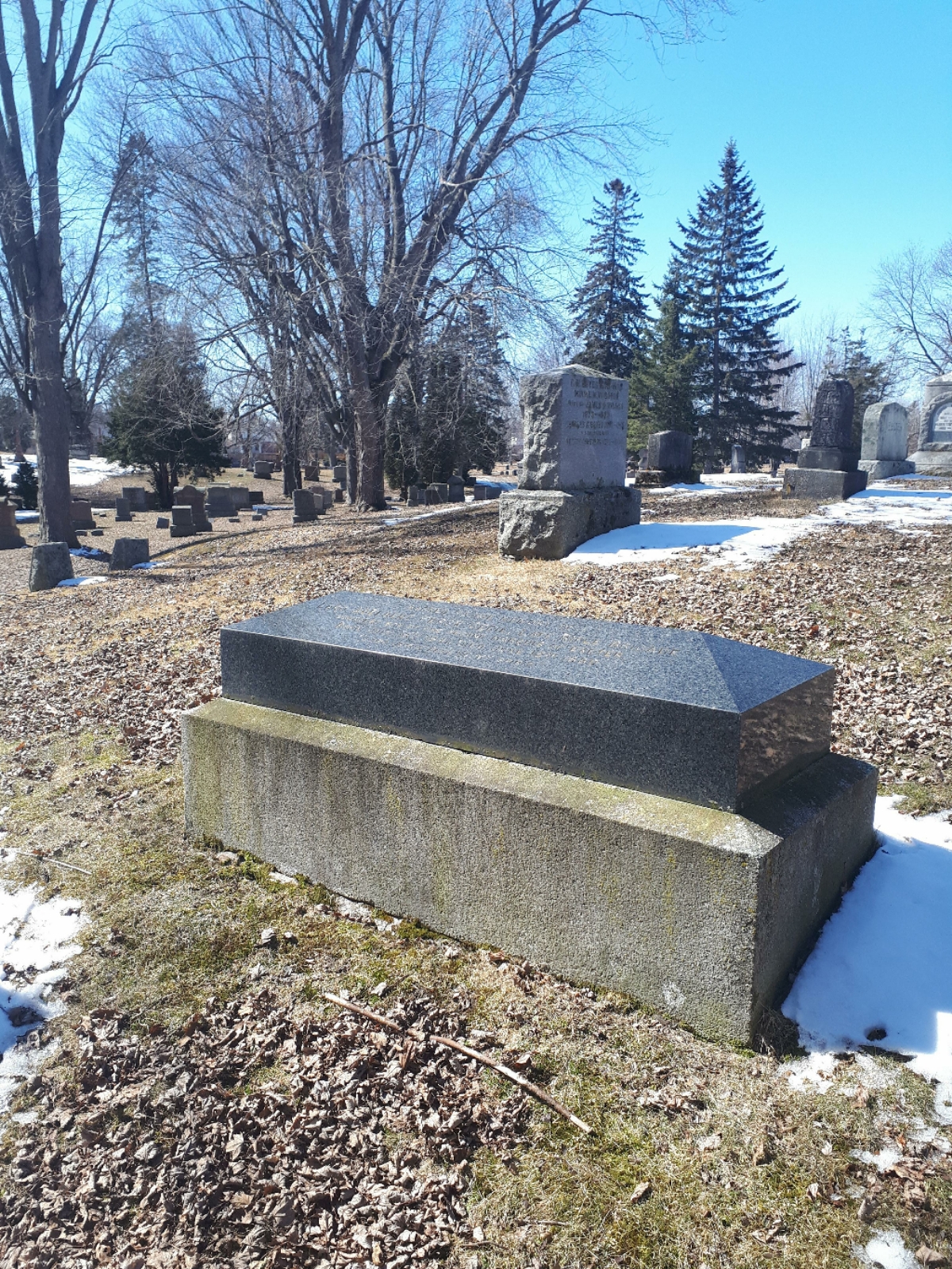 From: "Footsteps of Truth"

LORD ADALBERT CECIL. In common with a large circle of friends we lament the sudden removal of the late Lord Adalbert Cecil. In the midst of a life of usefulness and devotion to the service of the Gospel, his work on earth has been abruptly terminated by a sad accident. His lordship was crossing the Bay of Quinte, in the Lake of Ontario, going from Belleville to Adolphustown, in order to hold a series of meetings at the latter place, and was accompanied by a man named Churchill. In endeavouring to adjust one of the sails of the boat, he fell overboard. He could easily have swum to the shore, not a hundred yards distant; but knowing the difficulty his companion would have in crossing the Bay alone, he endeavoured to get back to the boat. Before he reached it, he sank, and being weak and in ill health, never rose again. A little judicious selfishness would have preserved him, but with the true martyr spirit, he laid down his life for his friend. Thus his death was, as his life had been. a noble example of unselfishness and self-sacrifice. One of the daily papers, speaking of him, says: “Of high birth, with every avenue to social distinction and many paths of social pleasure open to him, he chose to be a missionary of Evangelical Christianity. It is the school of thought or feeling which looks back to Simeon, which reveres the memory of Dr. Marsh, and has made a hero of Hedley Vicars, that loses a valued champion, in this scion of the house of Exeter.” In him, the Evangelistic Mission loses another warm friend and liberal helper.

A brother gave me a collection (in one volume) of A. P. Cecil's interpretations of the Bible:
Romans
1 Corinthians
2 Corinthians
Galatians
Ephesians
Philippians
Colossians
1 + 2 Thessalonians
1 Timothy
Hebrews
Revelation
See my scans here: https://www.cw-archive.org/en/search?q=cecil

Does anyone know if Cecil wrote on any more New Testament books?
It seems that Present Truth Publishers did not even know about the existence of the short summaries of 2nd Corinthians, Galatians and Revelation