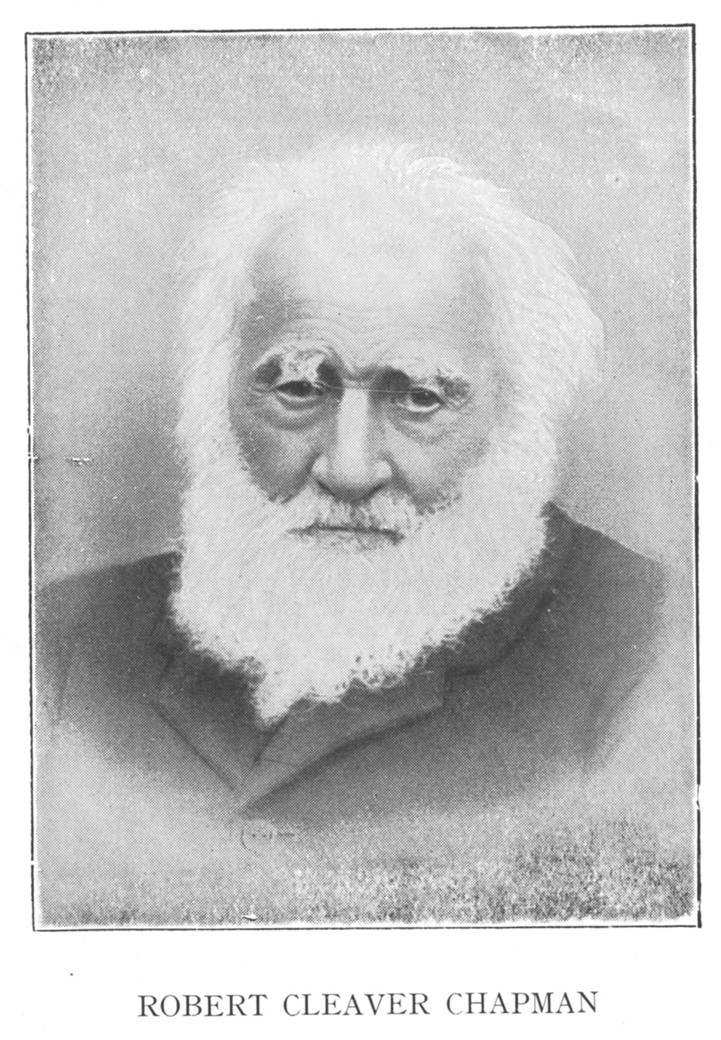 ROBERT CLEAVER CHAPMAN was born in Denmark on 4th January, 1803, where his parents resided at that time. His mother felt the importance of a child's early years, and taught and trained her children herself till they were nine or ten, seeking to instil high principles and a love for learning. While in Denmark Robert Chapman had lessons from a French abbe, and then he was sent to a school in Yorkshire, where he made good progress. He studied European languages, and purposed to acquire Eastern ones. He had a passion for literature, and desired to give himself to it; but though the Chapmans had been rich, the position of his father — Mr. Thomas Chapman — had in this respect undergone some change, and it was needful for the son to pursue a course that would bring remuneration; therefore, though with some reluctance, he studied law and became a solicitor. In this profession he soon occupied a good position, and had he pursued the course on which he started there is little question that the high honours to which it can lead might have been his. But God had honour in store for him, great and abiding, such as the world cannot give.

The turning-point in Mr. Chapman's life came when he was about twenty. He was invited by Mr. John Whitmore — an elder and greatly valued Christian worker at John Street Chapel, Bedford Row — to hear the well-known James Harington Evans, and in a few days a great change was apparent to those who knew him.

Taking his stand at once and decidedly as a confessor of Christ's Name, and owning Him as Lord, he was baptised as a believer, and attached himself to the assembly of Christians in London in which Mr. Harington Evans ministered the word. Having learned from the Scriptures that it was the will of God that believers should be baptised, he went to Mr. Evans and expressed his desire to carry it out. With commendable caution Mr. Evans said, "You will wait a while, and consider the matter. " "No, " said Mr. Chapman, "I will make haste, and delay not, to keep His commandments. " How blessedly he adhered to this purpose through his long life is well known.

Mr. Chapman felt that he was called of God to give himself to the ministry of the Word. When his friends told him he would never make a preacher his reply was, "There are many who preach Christ, but not so many who live Christ; my great aim will be to live Christ. " It was by God's grace that resolution was made, and by the same grace it was kept (Phil. 2. 13). That he did live Christ over seventy years, no one who knew him can question.

In the very year (1832) that Robert Chapman took up his residence at Barnstaple, with the steadfast purpose of seeking to learn and carry out all the will of God, George Miiller and his friend and fellow-labourer, Henry Craik, took up their abode in Bristol. These servants of Christ had already been exercised about many things at Teignmouth, and on the evening of the 13th August, "at Bethesda Chapel, Mr. Miiller, Mr. Craik, one other brother, and four sisters (only seven in all) sat down together, uniting in Church fellowship, 'without any rules, desiring to act only as the Lord should be pleased to give light through His Word.' "

Early in the same second quarter of the last century some servants of Christ in Dublin and other places were moved to give themselves to the diligent study of the Scriptures, and made an effort to carry out what was written. This Mr. Chapman had for some time been doing; consequently, when he and they were in God's providence brought together, they found themselves \in many respects of one mind, and thus new links were formed.

In the matter of Christian fellowship he gladly went where there was room for the whole Bible, and a readiness, so far as he knew, to carry out the will of God according to the Scriptures. He would not acknowledge sectarian titles, and if the name of a religious denomination was mentioned to him he would say that it grated upon his ears. But his heart went out to all who are Christ's, and such, whatever name they bore, were welcomed by him, even as in his intercessions he embraced the whole Church of God.

Though he never failed to give baptism a high place as expressing the believer's burial and resurrection with Christ, and was accustomed to baptise in the river Taw at Barnstaple until he was eighty (when he thought it well to leave this service to others), no one ever more strongly withstood the teaching that there is anything saving in it.

A hearty carrying out of the exhortation to be "given to hospitality" characterised the humble residences at Barnstaple, Nos. 6 and 9, on opposite sides of the short street called New Buildings. These abodes of peace and love are known to many throughout the world, and remembered with gratitude. No servant of Christ ever went there without finding a loving welcome and true sympathy, and few can have left without carrying away some deeper sense of the blessedness of trusting God, and seeking first His kingdom and His righteousness. No. 6 was from the beginning Mr. Chapman's dwelling, and in one of the rooms of this most simply furnished abode he who was truly "great in the sight of the Lord" breathed his last. Some time back a friend offered him the use of a better house, and desired him to occupy it as being more suitable, but he declined the offer, saying he wished to continue where any Christian, even the poorest, could come to him without hesitation.

Mr. Chapman rose very early; but he retired early as well. For a long while he prepared his own breakfast and took it alone; but in later years he joined others at breakfast at 7 o'clock, dinner being at 12 o'clock. There was great cheerfulness at the table—words of wisdom and grace were constantly heard; but no room was given for conversation to degenerate into frivolous talk. It was also a rule of the house that no one should speak ill of an absent person, and any infringement of this rule called forth a firm though gracious reproof. After breakfast, Mr. Chapman gave an exposition of Scripture—preceded by a hymn, and followed by prayer—which was greatly valued. Guests at Mr. Chapman's table ever found a plentiful supply; but nothing was allowed to be wasted.

From his early days until he had reached a great age Mr. Chapman was diligent in open-air preaching, and through his preaching at the annual fair at Barnstaple, and still more frequently in the town and neighbourhood, he became well known. But it was especially his life that told on the people of that town, and made him such a true witness for God. He was a man of considerable self-control. During his long course of service in the church he at times had great provocation, yet was he never moved, except to sorrow for those whose spirit and words were so contrary to Christ. When he was opposed he bore the opposition in patience, and when any turned from him he pursued them with his prayers and any expression of love it was possible for him to give. Those who knew him longest bear witness that they never heard a hasty or ungracious word escape his lips. A common saying at his house was, "It is better to lose your purse than your temper. " The help Mr. Chapman rendered in Conferences, and in special meetings of servants of Christ before the word "Conference" became so general, it is impossible to estimate. His words were always weighty; but his influence—the very atmosphere his presence created—was even more powerful. He used to say that while he gladly gave himself to intercession for larger meetings of which he heard, he specially valued those smaller ones in which it was possible really to confer over the Word of God. Many gratefully remember his help at Leominster and Yeovil. He did not cease to attend such Conferences until he was over ninety; and when he could no longer be present, he still welcomed notices of them for prayer, and often wrote some words of greeting and help.

One special and continuous subject of prayer with Mr. Chapman was the spread of the Gospel in all lands, and visits to New Buildings were paid by servants of Christ from many countries; but in the Lord's work in Spain he took special interest. Accompanied by two brethren (Mr.
Pick and Mr. Handcock, of Barnstaple), he had visited it in 1838, when it was fast closed against the Word of God, and journeyed from place to place, speaking of Christ as God gave opportunity, and praying that God would yet open Spain to the Gospel. In 1863 he had the joy of guiding into that land Mr. W. Gould and Mr. G. Lawrence, whom he left there.

His "Choice Sayings" have had an extensive sale both in book and leaflet form. His "Choice Hymns and Meditations" also appeared in book form. He edited a life-record of his colleague, W. M. HAKE, under the title "Seventy Years of Pilgrim Life. " His poems, "No Condemnation, O My Soul, " "Jesus in His Heavenly Temple, " "Author of Our Salvation, " "Can Heavenly Friendships Pass ?" "I Rest on Christ the Son of God," "No Bone of Thee was Broken," "Oh, My Saviour Crucified," "Show Me Thy Wounds, Exalted Lord, " "The Lamb of God to Slaughter Led," "With Jesus in Our Midst, " and several others appear in hymn books in use to-day.

Until very old age Mr. Chapman's voice was heard in public, and occasionally his address was given in full in a local paper, the editor of which highly esteemed him. At the Barnstaple annual meeting in June, 1901—the last he attended—he stood on his feet exactly one hour; he gave out the opening hymn from the desk, and then prayed, read several portions of Scripture, and spoke with much vigour.

On June 2, 1902, he rose as usual, but it was evident that he was poorly, and in the afternoon he fell with a slight shock of paralysis, affecting the left side. On the 12th of June serious symptoms manifested themselves, and about 8.50 that evening this loved servant of Christ, in his 100th year, entered into his rest, to await with Him the blissful moment when the body itself shall be raised, and he shall in every sense be conformed to the image of the Lord whom he so faithfully served.

The quotation is in Bennet's biography about Chapman. Look here https://www.brethrenarchive.org/bookshelf/leftovers/biographies/robert-cleaver-chapman-of-barnstaple/  on page 77

Chapman is one of the few Brethren who have become literary characters: He figures as "Pentecost Dodderidge" in the novel Mary Lee by Geoffrey Dennis (1922), the story of a girl growing up in the Open Brethren assembly at Barnstaple in the 1850s and 1860s. Here are a few excerpts. The last excerpt (from p. 431f.) proves beyond doubt that Pentecost Dodderidge is meant to be Chapman: Is there any other references for him being a vegetarian? I noticed the William Henry Bennet biography does not mention this.
Wednesday, Sep 29, 2021 : 11:35