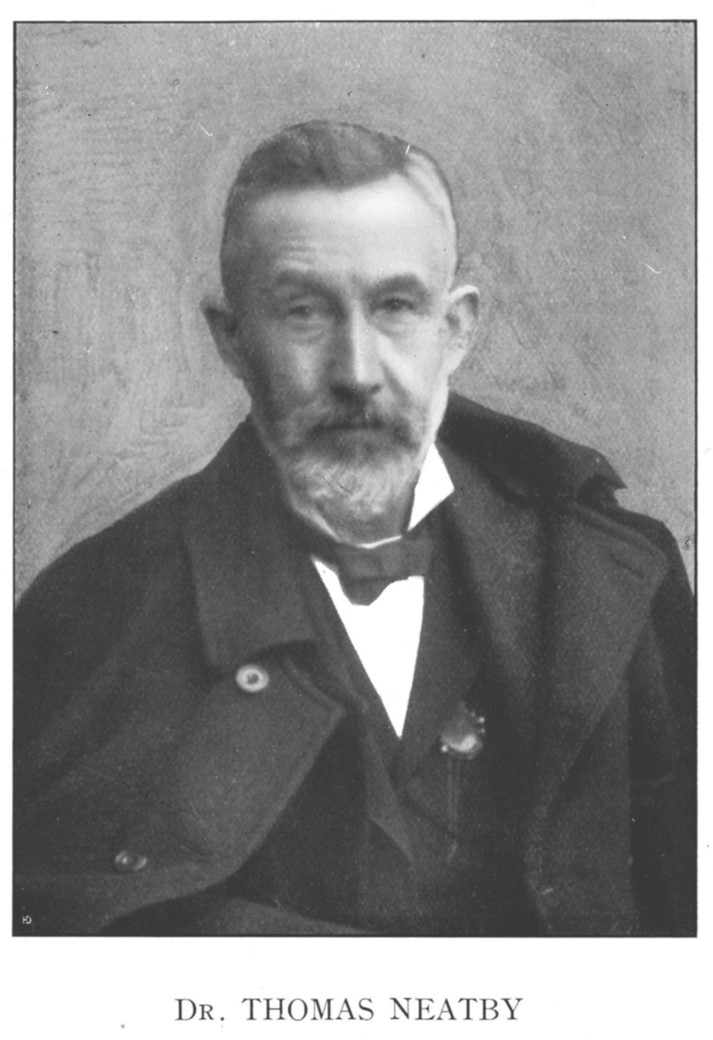 THOMAS NEATBY was born at Worsborough, near Barnsley, 1st August, 1835. His parents were fervent Christians, connected with the Methodists. The Methodists were preaching the Gospel with no little power among the villages of South Yorkshire, and during a mission held in the Wesleyan Chapel at Worsborough Bridge, both Thomas, then only nine years old, and his elder brother professed their faith in Christ. About 1846 the family settled in Barnsley, where the father had taken over a timber merchant’s business. Here friendships, destined to be cherished sixty years later as some of the choicest blessings of life, were formed with two men whose names are imperishably linked with the beginning of the Gospel in Inland China— Hudson Taylor and Benjamin Broomhall.

At the age of seventeen Thomas began to preach in the Wesleyan Reform connection, but before long he was associated with Christians who became widely known as “brethren.” In those early days he shared young Hudson Taylor’s ambition for Gospel service in China, and it was with this in view that he began the study of medicine.

He was apprenticed to doctors in Hull and Banbury, and afterwards studied at Edinburgh University and St. Bartholomew’s Hospital. He graduated M.D. at St. Andrews University about 1861. By that time he had become closely associated with the work of the Christians known as “Exclusive Brethren” in London, and he gradually abandoned his plans for China. His medical practice began in Camden Road, but he removed his residence, to Hampstead in 1866, remaining there until 1894, when he retired from his profession, after nearly thirty-three years’ most enthusiastic pursuit of it.

Even during the period of laborious professional life, half his great energy was given to the ministry. His association with J. N. DARBY came to an end in 1881, but his connection with so-called “Exclusive Brethren” extended to January, 1887. The interval was filled with a period of co-operation with WILLIAM KELLY in a movement that marked a certain reaction against the more extreme tendencies of J. N. Darby’ s system; but in the end he found the entire “Exclusive” discipline a burden to his conscience. Thence forward his services were freely at the disposal of all Christians, and he took part in many an undenominational convention; the bulk of his ministry, however, was happily exercised among the believers commonly known as “Open Brethren.”

For the last twenty-six years of his life he was partially crippled by a paralytic seizure, and the extent and vigour of his labours in itinerant evangelisation and Bible teaching were very remarkable indeed in the circumstances. His spirit never flagged, and his zeal for the work was keen at the last.

He was the author of one book, “Our Lord’s Coming Again,” published in 1877, though some of his choicest addresses are to be had in a little volume entitled “From Glory to Glory.” The end came peacefully on Sunday morning, 12th November, 1911, after a few days’ illness.

The Dr's middle name is Mossforth according to:
https://www.myheritage.com/names/george_neatby
He also edited the "Christian Testimony" with William Burbidge.