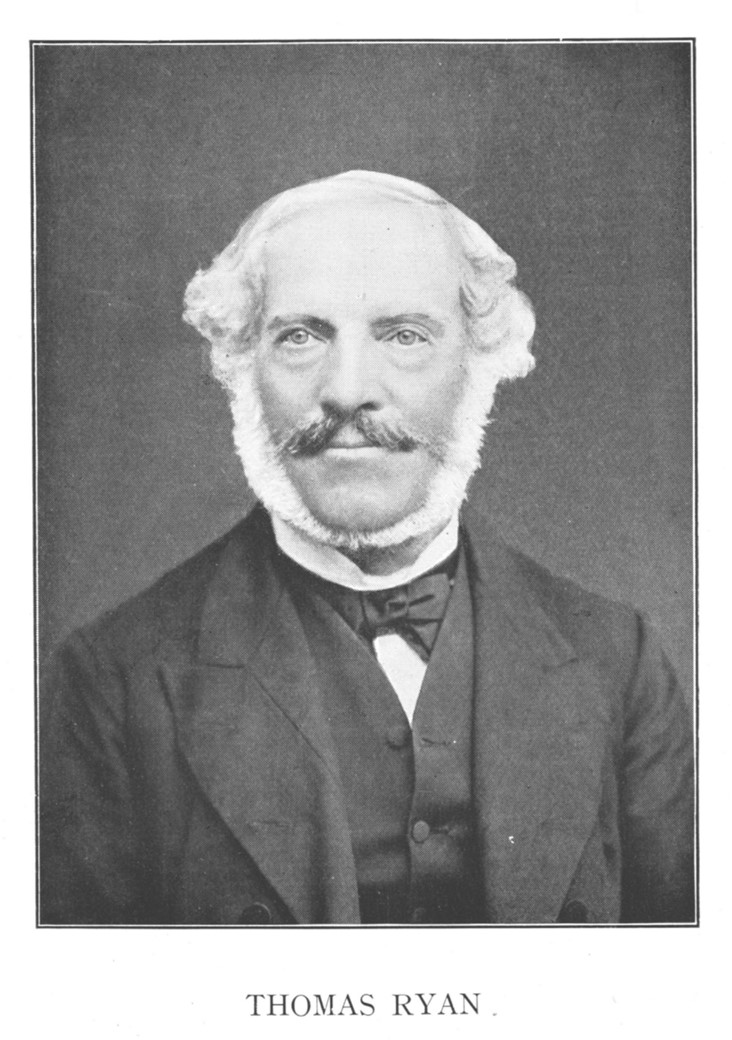 THOMAS RYAN came of a good family stock in the South of Ireland. In earlier days he had been, like most young country gentlemen, gay and careless, devoting his time to hunting and other rural pleasures; but being intended for "the Church, " he came to Dublin to carry on his University studies. In the good providence of God he was soon brought under the influence of some of the early "brethren, " his heart was opened to the reality and power of the Gospel of God, and under the teaching of the Holy Spirit the Bible became a new book to him. Conscientious difficulties respecting the Prayer Book in general, and the Ordination and Baptismal services in particular, soon arose, and quickly led him, much to the annoyance and disapproval of his father, to abandon his intention of becoming a clergyman, and to devote himself, with increasing joy, to the fellowship of spiritually-minded Christians, and to various spheres of free evangelistic work.

About this time, or very shortly afterwards, he made the acquaintance of Mr. J. N. Darby, Mr. J. G. Bellett, and many other leaders of what is known as the early "brethren " movement. At first he threw in his lot with Mr. Darby, but retired from fellowship with Mr. Darby many years ago.

For the past forty years Mr. Ryan gave himself with much devotedness and catholicity of spirit to the ministry of the Word in the assemblies, and in connection with Young Men's Bible Classes in various places did a magnificent work in opening up the Scriptures and grounding many in the foundations of the faith, specially in those truths which cluster round the Person and the Cross of Christ.

Being a very fair Hebrew and Greek scholar, and devoting his whole life to the prayerful and diligent study of the Word of God, he became truly "mighty in the Scriptures, " and, under God's blessing, large numbers received through his ministry a clear, vital hold upon the precious things of God, whilst many of the poor, who for years attended his Gospel meetings in the Dublin City Mission and other places, rejoiced in the simplicity and affection with which he preached to them the Gospel of Christ.

He was the author of "The Structure of the Acts," "Notes on the Book of Revelation, " "The Birthday and After, " and numberless tracts and pamphlets on doctrinal and controversial subjects, many of his volumes proving a help to a wider circle of friends than his voice could ever have reached. "The Structure " is worth securing to-day.

Those who loved Mr. Ryan best were those who knew him best. He was a warm-hearted and sincere friend, and whilst an uncompromising champion for the truth, was personally considerate and humble-minded. Possessed of a magnificent constitution, he carried on his labours into old age, and only within the last five years of his life did his health begin completely to fail; but up to the very last his heart was true to his Saviour and Lord, and a reference to the love of Jesus or the precious Blood of Christ whispered into his ear never failed to rouse him from his weakness and stupor to respond, as he did on a recent occasion, "Everything about Him is lovely. "

With marked singleness of heart he gave himself for all the latter years of his life to the fulfilment of the much-needed ministry emphasised by Paul in 2 Timothy 2. 2, till on the 14th of January, 1905, at the extreme old age of ninety-five this much-esteemed servant of the Lord and highly-gifted teacher passed into the presence of his Lord, where now he rests from his labours, and his works do follow him