Baptism: Into what Name? 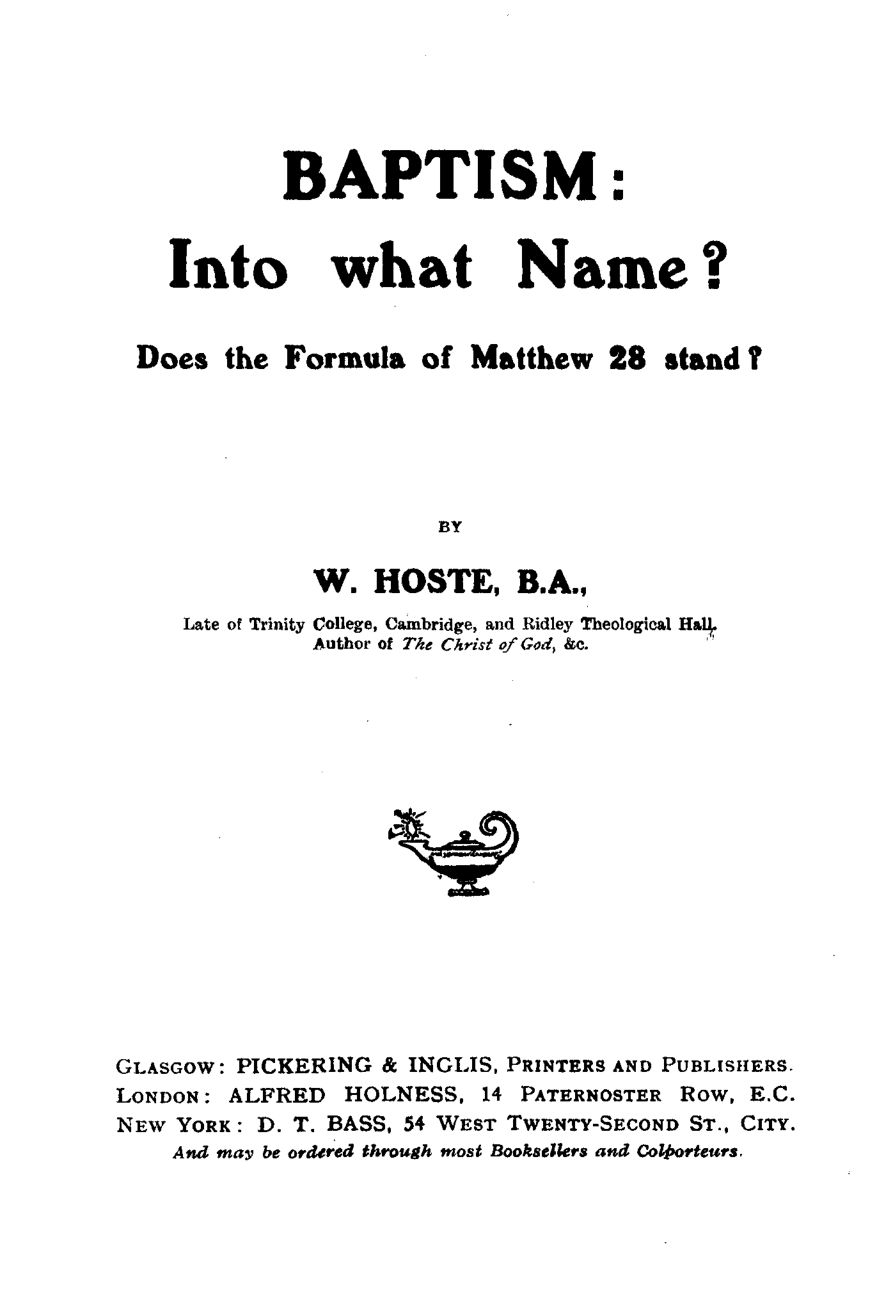 William Kelly wrote an interesting letter this subject which is generally unknown (it is not on the STEM-website, I think). It was printed in "The Believer's Monthly Magazine", volume 2 (1897), page 41 and 42, see here: https://www.cw-archive.org/en/magazines/BMM/2#40

Here is the full text:

To the Editor of the "Believer's Monthly Magazine."

Dear Brother,— I am told on good authority that some, in baptising confessors of the Lord Jesus, withhold the revealed Name of the Trinity. Since the Lord enjoined it at the close of Matt. 28, when He charged His servants to disciple all nations, it is a daring licence to set aside His unmistakable will and authority. No doubt these Christians, who take upon them to ignore the given formula and to substitute what they have culled from the Acts- of the Apostles, imagine themselves warranted by scripture, and of course wiser than their brethren. I understand they are under the idea that Matt. 28:19 contemplates only the future Jewish remnant and their action among the Gentiles before the age terminates; and that in the Acts of the Apostles we have this commission virtually abrogated for us as well as the connected formula for baptism. But it is certain that our Lord in His charge spoke after His death and resurrection, and that what He here laid down is distinctively Christian. His aim is as precise as in chapter 16:18, to indicate what was to take the place of the Jewish system, now guilty of His rejection and cross. As He was going to build His assembly "upon the rock" (His own revealed name, the Son of the living God), so He directs His servants to baptise the disciples of all the nations unto the name of the Father and of the Son and of the Holy Spirit. This is unequivocally Christian baptism for the individual, as His assembly shows the church or joint relationship. Nor should there be a question that so acted the apostles and other servants of the Lord; for on them lay the responsibility to obey the Lord's commission, They were to see it carried out. It in no way fell within the design of the Book of the Acts to repeat the formula, though we have every reason to be assured that the Lord's will was done, not only among the nations but with Jewish disciples. That Book constantly sets before us the Lordship of Him Who had been crucified of men. And the words employed on each or any occasion of baptising it never professes to give, as it is strange for believers to expect. It incidentally or historically mentions baptism (of course, with water) in or on (epi) the name of Jesus Christ (2:38), unto (eis) the name of the Lord Jesus (8:16; 19:5), in (en) the name of the Lord Jesus Christ (10:48). Probably they may have also expressed the authority of the Lord's name for their own act of baptising or of the confession of those baptised; but to infer that they did not baptise them to the holy name of the Trinity is not only unintelligent and egregious but irreverent. I am so satisfied that a baptism which omits the name of the Father and of the Son and of the Holy Spirit is null and void, that I think such persons ought to be baptised duly according to the word of the Lord. The previous act was a wrong to Him, though ignorantly done in His honour, and moreover slights the Christian acknowledgment of the Trinity from the very start. Believe me,