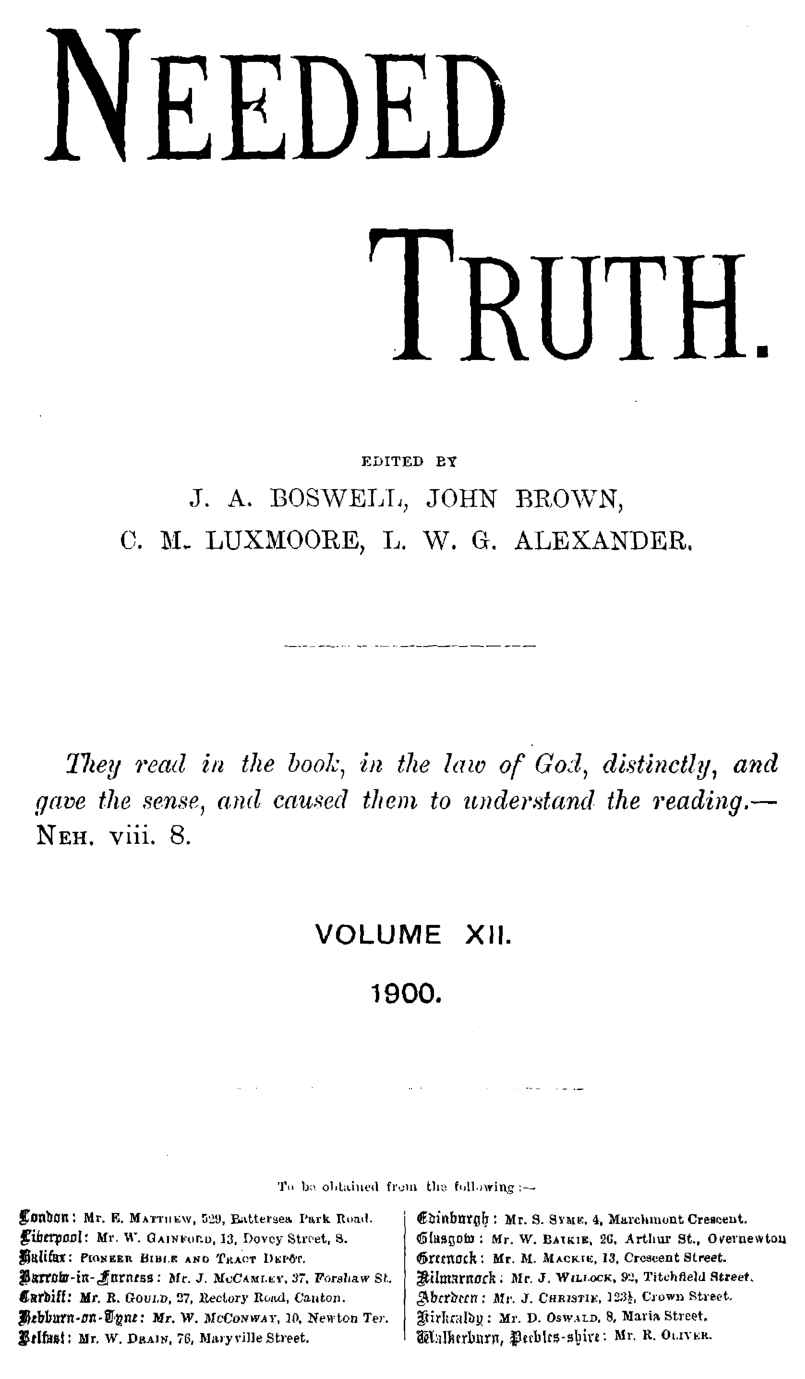 For personal use only and not re-publication. Thank-you!

Some of the articles in these give interesting historcial perspectives, e.g. in this volume "Church Positions Considered", which emphasises the 'Churches of God' as distinct from Exclusives and Open, allow no 'Occasional Fellowship'. Also "The Open Position", from which the following quotes comne;

The late Mr. Lincoln deplored this state of matters, and made great efforts to establish Scriptural fellowship. We well remember a conference in Beresford Chapel, about the year 1867, when an effort was made to exclude some unorthodox ones from unaccredited meetings from entering, and brethren were placed at the door for this purpose. If we remember rightly, only those having received tickets were allowed to enter. We mention these circumstances to show that at that day, and since that day, there have been some, at least, who desir-ed a more Scriptural fellowship. Whether all efforts in this direction are given up now as hopeless, we know not, but it may well be so.

Beresford Chapel brethren might decide that such and such mission halls could not be looked upon as assemblies with which they could have fellowship; but then, again, W Street, one of the leading assemblies in London, would have fellowship w i t h these meetings ; and Beresford was in direct fellowship with W Street, so that after all it would be simply a three-cornered fellowship ; that is, A would not receive from B, and yet A would be in full fellowship with C, and C and B would be in full fellowship, so that those going from A to C would sit down there with those they refuse from B themselves. How hopelessly inconsistent! Little wonder if all effort to set such a condition of things right is ultimately given up in despair.
....
But again, two modes of reception are practised. As we have shown, both in the exclusive and open assemblies Christians are received to the breaking of bread. How our exclusive friends have carried on this practice for years without, according to their own theory, being thoroughly leavened with evil is beyond our comprehension ; for if reception, from an open assembly, where no evil doctrine is held, will leaven another assembly, how is
it that Christians from the sects, where every species of evil doctrine is held, can be received to the breaking of bread without this leavening process ? " Open Brethren " here are far more consistent. They do not hold the leaven theory. They receive all Christians personally sound, whether from a non-eternity meeting or an independent chapel, where the minister, and perhaps the larger part of the congregation, hold this doctrine so subversive to the very foundations of the Faith.

When we seek, if the Lord will, to set forth the position and responsibilities of church and churches of God, we shall hope to deal more particularly with this subject, only here remarking that there is no such a thing in Scripture as reception to the breaking of bread. We find the breaking of bread encircled by the apostles' doctrine and the fellowship, and there is no such thought in Scripture as the bringing it outside of these circles for the accommodation or convenience of Christians living in disobedience to the truth.
....
But perhaps of all the disastrous practices, the bringing in of his converts by the evangelist to the meeting before he leaves the place is the worst. There is a great parade made of the numbers converted and joined to the meeting, and this is spread broadcast through the agency of some religious paper. It is essential to the evangelist's position that he should have conversions, for if he could not write and speak of so many being added to the meeting, he would soon lose his popularity, and in many cases his support. How nearly this resembles a minister in the sects, gathering in members converted or unconverted to support his Church, it is easy to see; and yet this shocking state of matters is continually tolerated. "Were we to examine a year or two later into the condition of the meeting that had thus been enlarged, we should often find that the greater part of these converts, if not all, had shown by their lives that they were unconverted, and had never been joined to the Lord. .They have left the meeting and gone back to the world; or worse, they may have remained in as troublers until they have either been put away or have themselves got to a place of power, where they can do as they will.
....
It would be necessary to give some explanation of the origin of those northern assemblies, and why, at one time, they so differed in doctrine and practice from the assemblies in the south, and this is not difficult to explain. The writer can remember the time when the assemblies of Open Brethren in Scotland could have been counted wellnigh on the fingers of one hand. In fact, there were no meetings, we believe, further north than Dundee. Nothing was to be found in the Orkney or Shetland Islands. There had been a^ large Open meeting in -Edinburgh, where noneternity of punishment was tolerated as a doctrine, but this meeting had dwindled away. There were some few meetings in the west, and the meetings established by the late Mr. Bowes, of Dundee, which had their own special characteristics. How, then, did the present work originate? for the almost prophetic words of the late Duncan Matheson in some parts of the country are well-nigh fulfilled. He said that he believed the day would come when there would be a meeting for the breaking of bread in every village in Scotland. It was to labour with the late Duncan Matheson that the writer, with other brethren, first came to the north. At -this time we were but throwing off the trammels of sectarianism. The liberty to meet as Christians and to break bread was seen and taught, the wrongness of sectarianism, the unscriptural position of the one-man ministry, setting aside as it does the gifts given of God for the edifying of the saints according to Ephesians iv. These things, we say, were taught through the length and breadth of the land as far north as the Orkney and Shetland Islands.
None of the brethren engaged in this work had been trained in Open Brethren assemblies. Mr. R. T. Hopkins and Mr. S. Blow were both led out from Mr. Spurgeon's College ; Mr. Harrison Orde and the writer had also been led out from the sects by the study of the Word of God, and it was with the open Bible that the Christiana in the north were gathered into assemblies, and taught to look to it as their guide, not the traditions or practices of the Open Brethren in the south. .The position of the meetings in the north, we remember hearing at this time, did not escape the notice of the late Mr. Darby, and he told his followers that they could not be treated as associated with evil in the same way as those in the south. Had a distinct stand been taken at this point, such as has been taken in the last few years, the north might, in great measure, have been saved, we believe, from Open Brethren principles. But this, alas! was not done, and the opportunity was lost. By degrees teachers from the south came^ in and gained a footing for their doctrines; some made it their object to use their influence to break down the teaching and the practice that they found prevailing. They did not hesitate to build on other men's foundation, and a day is coming that will declare how much of this building has been of wood, hay, and stubble.

When we speak of the assemblies in the north, we would remember that in some parts of the south there were also assemblies that were established upon the same principles as those in the north, especially in Liverpool and its neighbourhood. Many of the Christians in these assemblies had seen with their own eyes that which was little known of in the north, and these, Berean-like, searched the Scriptures for themselves, which has led to very many assemblies following on in the truth as they first received it. In Aberdeen, where the special effort we have spoken of was made to introduce Open principles, brethren had more or less fallen under their influence. The plea raised was that the condition of things in the south did not affect them in the north, that there were no such assemblies in their midst. Thus when their brethren further south took a position in which they could act out all the truth they had learned and what might still be unfolded to them from the "Word of God, leading men in the north came together and deliberately decided to shut out the further light andf truth from the assemblies which they represented, and this for the time being they have only too well succeeded in doing. "We say for a time, for we believe that there will yet be many who will be brought to see that they have departed from the truth, and that others have simply followed on as they began. The assertion has been made by many that they were cut off in the north from fellowship by those who separated from Open principles in the south, and a letter from the writer of this article has been made use of to prove this statement; and as many will only have heard of it, we now give the letter in full, that brethren may judge for themselves how utterly without foundation this statement is. Instead of cutting off the north, we might have expected that the north as one man would have stood for the truth; but, alas! as we have already said, the evil from the south had done its work, and not only did brethren decide to shut out further light, but they refused that which was granted by those in the south, who had far better ground for refusal—namely, a face-to-face meeting and looking into the "Word of God together to see if those things were so. And how do matters stand to-day ?
The very worst form of ecclesiastical evil has been introduced into the north, and an assembly established where the subversive doctrine of non-eternity of punishment can be tolerated and held. And now the evil is at their own door, how do these brethren act ? They have recourse to the miserable subterfuge of the threecornered fellowship of which we have already written— namely, that of announcing that they will have no fellowship with this gathering of iniquity at their own door; yet when they go south they will find themselves confronted at the same table with those very ones that they refuse to be identified with at home. Can such a condition as this really satisfy the minds of intelligent Christians if they have * ever known a God-given deliverance from sectarianism? "We believe not; but light may be rejected, and then darkness will follow, and repentance to the acknowledgment of the truth may never be given.