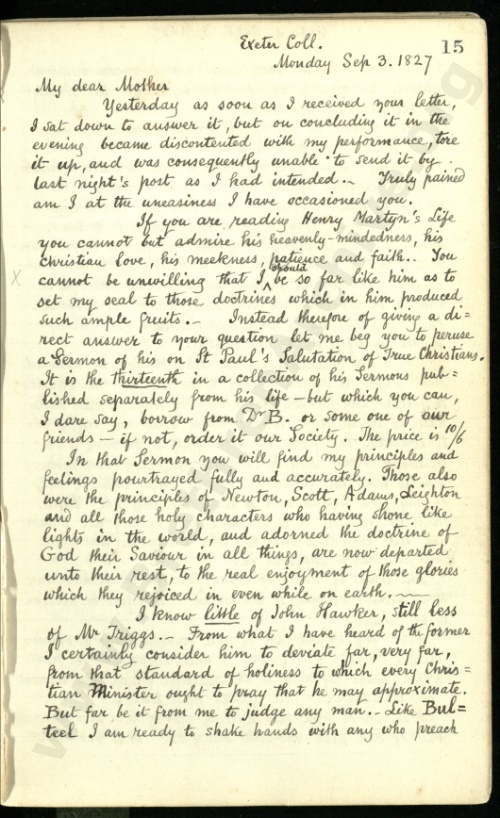 Yesterday as soon as I received your letter, I sat down to answer it, but on concluding it in the evening became discontented with my performance, tore it up, and was consquently unable to send it by last night's post as I had intended. Truly pained  am I at the uneasiness I have occasioned you.

If you are reading Henry Martyn's Life you cannot but admire his heavenly- mindedness, his Christian love, his meekness, patience, and faith. You cannot be unwilling that I should be so far like him as to set my seal to those doctrines which in him produced such ample fruits. Instead therfore of giving a direct answer to your question let me beg you to peruse a Sermon of his on St. Paul' s Salutation of True Christians. It is the thirteenth in a collection of his sermons published separately from his life but which you can, I dare say,  borrow from Dr. B[lackmore] or some one of our friends - if not order it our Society. The piece is 10/6.

In that Sermon you will find my principles and feelings pourtrayed fully and accurately. Those also  were the principles of Newton, Scott, Adams, Leighton and all those holy characters who having shone like lights in the world, and adorned the doctrine of God their Saviour in all things,  are now departed unto their rest to the real enjoyment of those glories which they rejoiced in even while on earth.

I know little of John Hawker, still less of Mr. Triggs. From what I have heard of the former I certainly consider him to deviate far, very far, from that standard of holiness to which every Christian Minister ought to pray that he may approximate. But far be it from me to judge any man. Like Bulteel I am ready to shake hands with any who preach