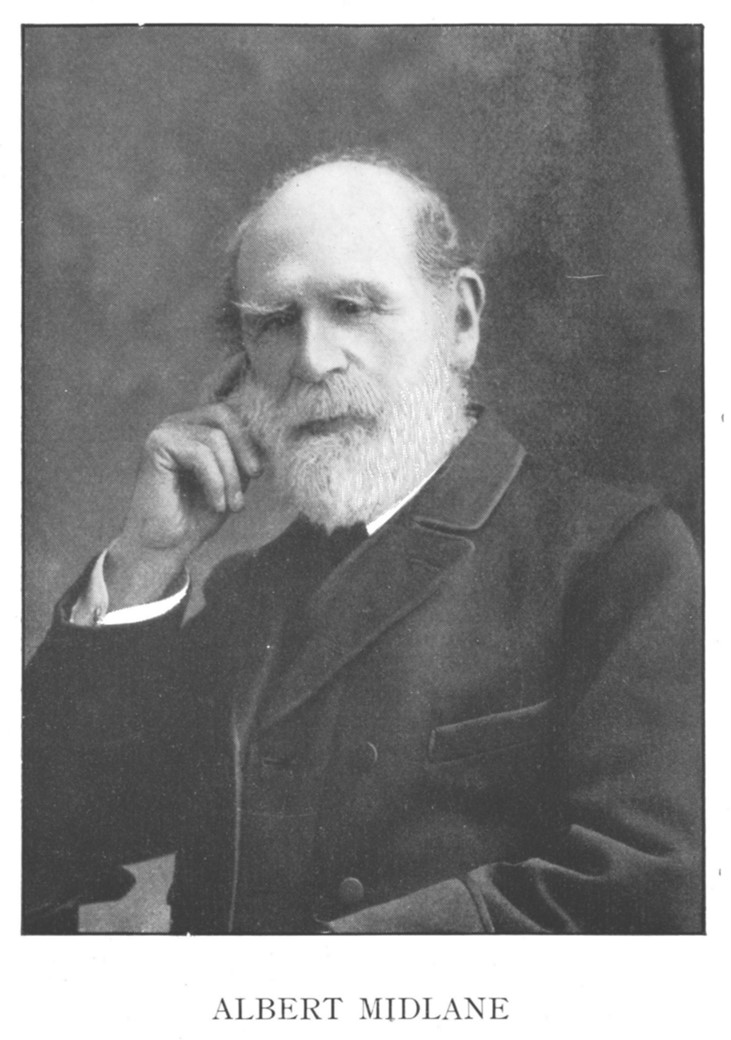 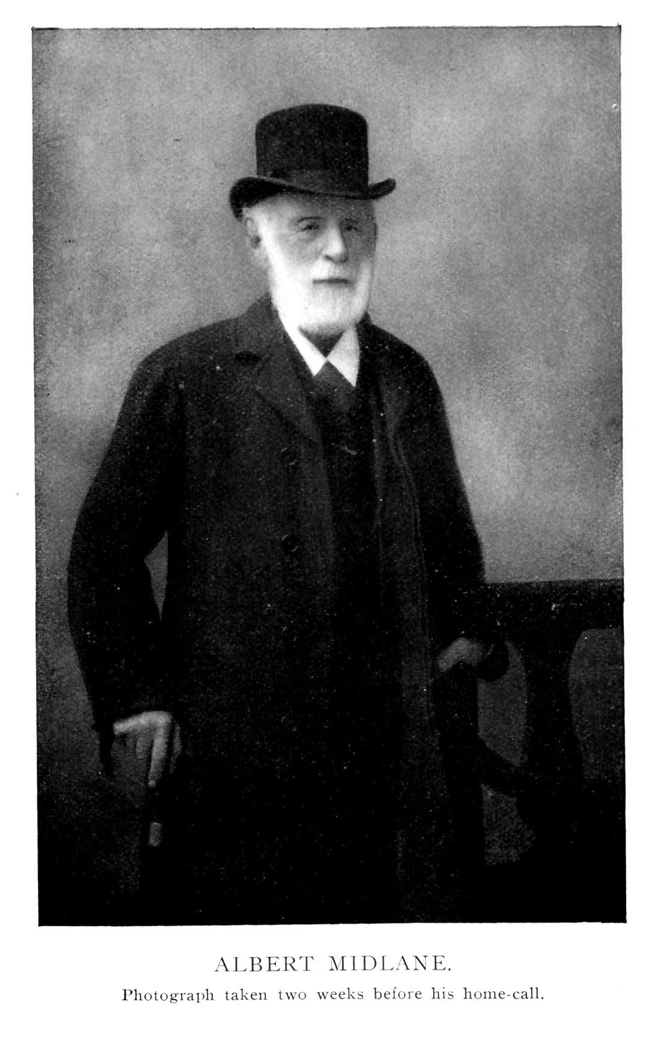 From "The Royal Crown Recitations Ballads, and Other Pieces for Young Folks" by Henry Pickering

ON January 23rd, 1825, there was born in the town of Newport, in the parish of Carisbrooke (famed for its castle), in the Isle of Wight, one who was to cause myriads throughout the world to sing of "the Friend of Sinners, " and to allure many to the "Home above the bright blue sky. "

ALBERT MIDLANE never knew the blessing of a godly father, but admitted that he owed much to a spiritually minded mother and a devoted sister. He commenced life as printer, but after three years left "the art preservative" and became an ironmonger's assistant—for long years being in business on his own account, one who mourned his decease having been in the employ of his firm for over fifty years.

In his boyhood days he was brought into touch with Thomas Binney, the author of "Eternal Light!" from whom he may have received some impetus to persevere in the poetic line. After many youthful attempts he had the joy of seeing published a hymn, written at Carisbrooke, in 1842. His first hymn to be used was "God Bless our Sunday School, " to the tune of the National Anthem, written in 1844, when he was nineteen years of age. Since then hymns and poems to the number of about one thousand have flowed steadily from his pen. These include the popular revival and prayer meeting hymn sung in all lands: "Revive Thy Work, 0 Lord. " The glad evangelistic refrains: "Oh what a Saviour is Jesus the Lord," "Salvation, oh, salvation, endearing precious sound, " "Oh what a glorious truth is this, Jesus died," "How vast, how full, how free, the mercy of our God," "Hark! the Voice of Jesus calling, " "I am not told to labour, " "Oh what a gift the Father gave, " "All things are ready, come," and "Passing onward, quickly passing." The hymns of adoration and worship, still sung in many Assemblies: "Sweet the theme of Jesus' love, " "Without a cloud between, " "Thine, Jesus, Thine, " "Bound for glory, pressing onward," "He comes, He comes, the Bridegroom comes, " as well as many pieces on various themes.

But Mr. Midlane was best known and will live longest in memory in connection with his children's hymns, the favourite of which, "There's a Friend for little children above the bright blue sky, " has attained universal and deserved popularity, though some authorities, including The Times, maintain that "A little lamb went straying" is of equal merit. The favourite hymn and the tune which beautifully blend were both written under striking circumstances.

The hymn was composed on February 7 in the Revival year 1859. An interviewer writes: "Stimulated by a passionate desire to write a special message for the little ones, Mr. Midlane, after a busy business day, settled down in the quiet of the evning to what proved the great task of his life, and by two o'clock in the morning his supreme effort in hymnology was completed. But it was achieved at the expense of great physical fatigue, which was most marked after a hard day's work in his business, and he recently told the writer that he was found in a state of collapse and had to be medically attended. 'But the hymn was completed,' added Mr. Midlane with a radiant smile. "

The standard tune, "In Memoriam, " to which it is often sung, was composed by Sir John Stainer under the following circumstances: "The committee engaged on the music of 'Hymns Ancient and Modern' (enlarged edition, 1875) were meeting in London, and when the hymn came up for consideration it was found that though they had several tunes before them, none were considered satisfactory. It was suggested that a new tune might be written by one of the committee, and Sir Henry Baker, the chairman, proposed that Sir John Stainer should retire to Sir Henry's bedroom, and try what he could do. Sir John complied with the suggestion, and in a very short time returned with the present tune, which was at once adopted. " The tune, which first appeared in "Hymns Ancient and Modern" (1875), was named "In Memoriam" in connection with the death of Sir John's little son, Frederick Henry Stainer, who died on December 30, 1874. Thus, love for "little children" inspired both words and music. As originally compiled the verses ran: "There's a rest, home, Friend, crown, song, and robe, " but most people will agree with Dr. Julian, the noted authority on hymnology, that "the re-arrangement produces a better sequence, and gives greater unity to the hymn. "

Sent as a contribution to "Good News for the Young, " a little paper for children, edited by C. H. Mackintosh, and first printed as the concluding article to that monthly, for 1859, under the heading of "Above the Bright Blue Sky," the hymn at once attained popularity. It has found its way into over 200 hymn books, is sung in China, Japan, India, all over Europe, America, Africa, Australasia, and in most unlikely parts of the world, as well as being translated into more than half a hundred languages, and giving promise of continuing to be sung "while the earth remaineth. "

The author lived to see the celebration of the jubilee of his best-known hymn, and had the pleasure of hearing three thousand children assembled in St. Paul's Cathedral, London, blending their voices in "There's a Friend for little children," as well as attending an open-air service in his native town, on February 7, 1909, when his voice was heard in public for the last time, as he earnestly spoke concerning eternal things to the crowds of old and young who had assembled to honour their fellow-townsman.

Hymn-writing brought Albert Midlane into touch with many eminent personages. Lord Tennyson, the poet laureate, encouraged him much in his hymn-writing. Dr. Parker, the famous City Temple preacher, said: "I had rather been the author of 'There's a Friend' than of my most eloquent sermon. " C. H. Spurgeon incorporated a good many of his hymns in the Metropolitan Tabernacle hymn book Mr. Midlane often referring to a time spent with the prince of preachers. Mrs. Luke, authoress of "I think when I read the sweet story of old, " resided for long in Newport, and the two "children's poets" had much in common. Edmund Peel, the author of "The Fair Island, " was an intimate friend. Queen Victoria graciously accepted several volumes of his compositions, and the Prince Consort purchased a number for circulation amongst his friends. He corresponded with various other notables in various spheres.

Unlike most authors, Mr. Midlane never took out a "copyright " for any of his hymns, and never derived any monetary benefit therefrom. After half a century of plodding labour in connection with his ironmongery business he found himself a bankrupt for £500, through having become guarantor for a friend. His misfortune was made known to the public, and Sunday-school friends throughout the country subscribed generously, with the result that Mr. Midlane was able to pay all his creditors and get his bankruptcy annulled, and an annuity was secured which relieved the veteran hymn-writer and his wife of further anxiety in this respect.

In the earlier part of his Christian career he was associated with many of the well-known leaders of "Exclusive" brethren, but for many years had been associated with the "Open " party. His poems on "Union," "No sect on earth but Christians only," etc., indicate his longings for the true heart unity of all saints.

On March 20, 1901, Mr. and Mrs. Midlane celebrated their golden wedding. On January 23, 1909, the County Press, to which he had contributed many pieces, contained one of his last poems entitled, "On my 84th Birthday," which indicates his being "made meet for the Inheritance. " Two of the verses were as follows:

"What is the world to one whose hopes
Are fixed beyond the skies ?
What can impede the charioteer
Just near to grasp the prize ?

Enough! One's cup is brimming full.
All earthly struggles o'er;
Beneath the shadow of His wings,
In bliss for evermore. "

On Thursday morning, February 11, he was stricken with an apoplectic seizure, from which he never rallied, passing away quietly in his sleep just as the morning of Lord's Day, February 28, 1909, was approaching.

The body was carried from Forest Villa, so long his abode, to Carisbrooke Cemetery, and laid to rest with the singing of his own hymns, "Star of the morning, rise!" and "One lasting, long Amen, " concluding with a number of children's voices uniting in "There's a Friend for little children. " A pathos was put to the scene by the interment of a little child not twenty yards away whilst the last verse of the children's
hymn was being sung.