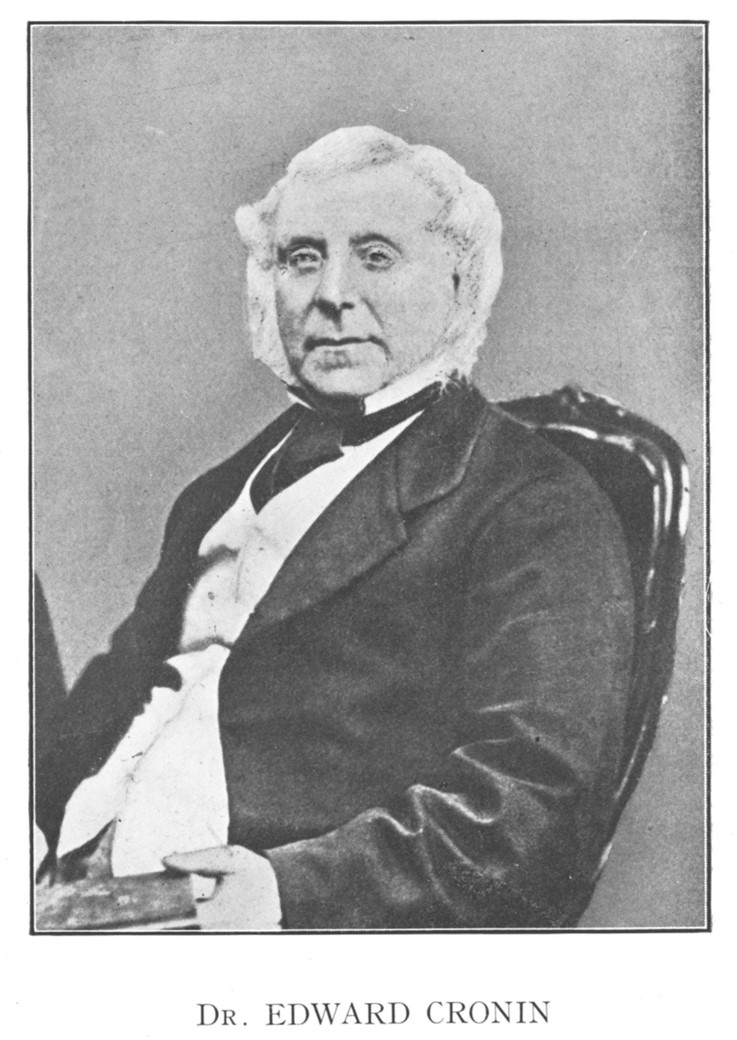 Dr. Edward Cronin was born in Cork in 1801. His father was a Romanist; and he was brought up in that Church, but his mother was a Protestant. He was educated after school at Dublin University. How or when he was converted is not known, but Mr. Andrew Miller says: "He came up to Dublin as a medical student about the year 1826. He applied for communion as a visitor, and was readily received by the Independents, but when they learnt he had become a resident this liberty was refused. He was then informed that he could no longer be admitted to the table of any of the congregations without special membership with some one of them.

"This announcement made a deep impression on his mind, and was no doubt used of God to turn his attention to the truth of the 'One Body.' He paused, and after much exercise of conscience and prayer, he refused to submit to their Church order. It was a time of trial, … but the Lord overruled it for blessing." He and a Mr. Edward Wilson, Secretary of the Bible Society, after studying the Word for some time, began to see their way clear to come together on Lord's Day morning for the breaking of bread and prayer.

They were speedily joined by several others. They were no doubt forced into the place of separation by the mistaken conduct of the Congregational body, but they were also led to fall back upon the sure Word of God, to act under their Divine instincts and the unerring guidance of the Holy Spirit. The little meeting never formally broke up, but they united at once with those who began to break bread in Fitzwilliam Square.

Dr. Cronin's name is always associated with Mr. Darby, Mr. Bellett, and Mr. F. Hutchinson, as coming together in the winter of 1827-28, after much conference and prayer, on the Lord's Day morning for breaking of bread as the early Christians did, counting on the Lord to be with them.

Later on Dr. Cronin, together with his mother and sister, went out with John Parnell (Lord Congleton) and F. W. Newman, to Bagdad, to join A. N. Groves in mission work. They had a terrible journey across the Mediterranean to Aleppo, and thence through the desert to Bagdad. Lord Congleton married Miss Cronin at Aleppo, but owing to the fatigue and unhealthy condition she died there. Mrs. Cronin died later in Bagdad, when the party arrived in June, 1832. On one occasion they were stoned out of a town and Dr. Cronin left for dead. The work of Bagdad proving barren of results, Mr. A. N. Groves went to India, where he spent many years, and the others returned to England to stir up the Church to faith and prayer that great signs and wonders should follow in the mission field.

Dr. Cronin addicted himself to ministry of the saints and took a leading part in oversight in the London meetings of Exclusive Elder Brethren, until his independent action at Ryde in 1879 led to their deciding that they had no fellowship with his act.

Dr. Edward Cronin died at Brixton in February, 1882, aged 81, still holding firmly to the Scriptural principles which had governed his life, and, above all, with a simple and happy trust in the Saviour whom he had loved and served so faithfully for so many years.

Phelix Edward said ...
Appreciate your effort in bringing into light the biographies of chief among brethren for the new generation
Wednesday, Aug 22, 2018 : 01:18
Timothy Stunt said ...
Following a cautious and tentative suggestion from Michael Schneider, I'm of the opinion that C.E.F. (the author of this piece on Edward Cronin) was Charles Edward Faithful (1848-1924) an Open Brethren missionary in Spain for many years. Timothy Stunt
Wednesday, Aug 22, 2018 : 03:29
Tom said ...

Good, that's one of the mystery Chief Men initials solved then!

What a great name to have for a Christian though - Faithful - but on the other hand it must have been a tad irritating every time that word came up in a Bible Reading, or in the Preaching, knowing that for a split second everyone's mind turns to you. For that reason I've always been glad not to have a Biblical name 🤣

Wednesday, Aug 22, 2018 : 07:55
Timothy Stunt said ...
I think the automatic-spell-check got the better of me... I intended to spell his name with two 'l's.... FAITHFULL ... But I agree with you about Biblical names.... Think what it must be like to be called Shadrach. Sampson would have been pretty challenging... Timothy
Thursday, Aug 23, 2018 : 03:35
Timothy Stunt said ...
In sackcloth and ashes I must confess that two years after 2018, I was persuaded by the sharp-eyed Marty that I was wrong to claim that CEF was Charles E Faithfull. With conclusive evidence he showed that CEF was Charles Edward Franck. For fuller details consult: https://www.brethrenarchive.org/archive/others/histories/chief-men-among-the-brethren/ Timothy Stunt
Saturday, Aug 14, 2021 : 05:57