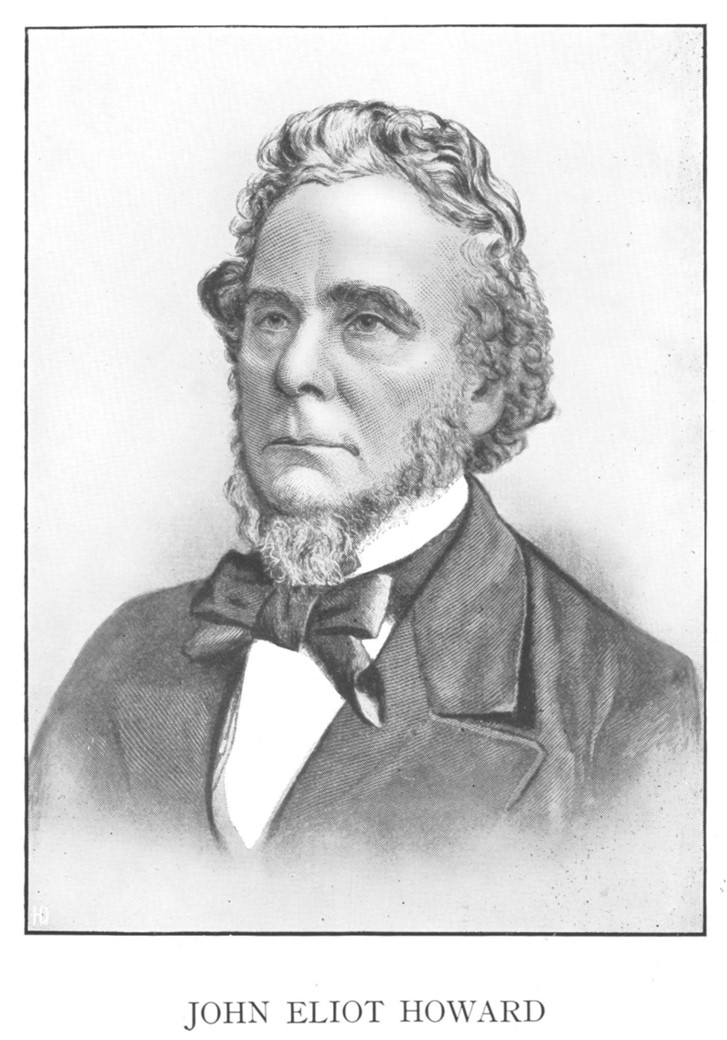 From "Chief Men Among The Brethren"

JOHN ELIOT HOWARD, the son of Luke Howard, the eminent meteorologist, was born in 1807. After he left school he went into his father's business at Stratford, and he was a member of the firm of Howard & Sons, the well-known quinine makers and chemical manufacturers, up to the time of his death.

He was brought up as a member of the Society of Friends, and about the year 1835 the earnest study of the Scriptures, and the perusal of a little work entitled " Jehovah-Tsidkenu, the Watchword of the Reformers," were the means of opening his eyes to the doctrine of justification by faith. His baptism, and that of his beloved wife, took place on 28th July, 1836, and in October of the same year he resigned his connection with the Society of Friends.

On the 4th December he partook of the Lord's Supper at the Baptist Chapel, Tottenham. From this time he began to preach the Gospel, going out to the surrounding villages. He was at that time nearly thirty years of age. In 1838 he began a regular evening meeting in Tottenham, and on the 4th November the first meeting for worship and communion was held. This was in a small room in Warner Terrace. In 1839 he built the room in Brook Street; in 1842 there were eighty-eight in communion.

In the early days of "Brethren" J.E.H. was actively engaged in the controversy amongst "Friends," and many publications issued from his pen. He was also writing on Scriptural views connected with "Brethren," so-called, with whom he was associated until the end of his life.

For over forty years he was a faithful minister of the Gospel. His ministry was greatly owned of God in the conversion of sinners and the edification of believers; he was widely beloved both at home and abroad. The cause of foreign missions was very dear to his heart, and he was warm in his sympathies and generous in pecuniary help. He corresponded for many years with some beloved servants of the Lord in foreign lands, and they will deeply feel the loss of the loving sympathy of his heart, so warmly expressed in his correspondence with them.

He was faithful, fearless, and independent in his expression of what he believed to be the truth. Gifted with a powerful mind, of quick perception and rapid thought, he eagerly made himself master of the religious and scientific literature of the day. He devoted a great deal of time and thought to the study of some of the scientific questions that in these days perplex so many minds, and his clear insight enabled him to unmask much of the scientific and religious philosophies that are now so prevalent, one of his best known religious works being "Lectures on the Scriptural Truths most Opposed by Puseyism. "

In 1865 he wrote a volume of lectures on "Scripture and Science, " which has been much valued. He rendered great and lasting service both to religion and science by showing in many learned and interesting papers that there is, and can be, no conflict between science and religion—between the facts of nature and the Word of God.

In 1883 he purchased the lease of the lecture hall in the High Road, Tottenham, and the meetings were transferred there from Brook Street. He preached there as usual, twice on the Sunday before his death, with much solemnity and power, on the words, "For God hath not appointed us to wrath, but to obtain salvation by our Lord Jesus Christ, who died for us, that whether we wake or sleep we should live together with Him. " His words deeply impressed his audience, though they little deemed they were hearing his last discourse. "Yes, that is the central point, " he said; "Christ died for us, and we live through Him. What matters it, then, whether we wake or sleep? We live and shall live together with Him." Those who listened to him with delight had little thought that it was the last time they would hear the well-known voice.

He was taken ill on 20th Nov., 1883, but no danger was apprehended until Thursday morning, when he gently fell asleep in Jesus at his residence, Lord's Meade, Tottenham.

Tom said ...
This interesting article appeared a few days ago, about a school founded by Rachel Howard, brother of John,
http://www.pontefractandcastlefordexpress.co.uk/news/children-delve-into-school-s-past-1-8780187
Thursday, Oct 5, 2017 : 13:38
Timothy Stunt said ...
There is an excellent account of both John Eliot Howard and his sister Rachel — and indeed of the whole family! in the late Gerald T. West's work, edited by Tim Grass, 'From Friends to Brethren: The Howards of Tottenham, Quakers, Brethren and Evangelicals.' (Troon: BAHN, 2016)
Friday, Oct 6, 2017 : 16:12