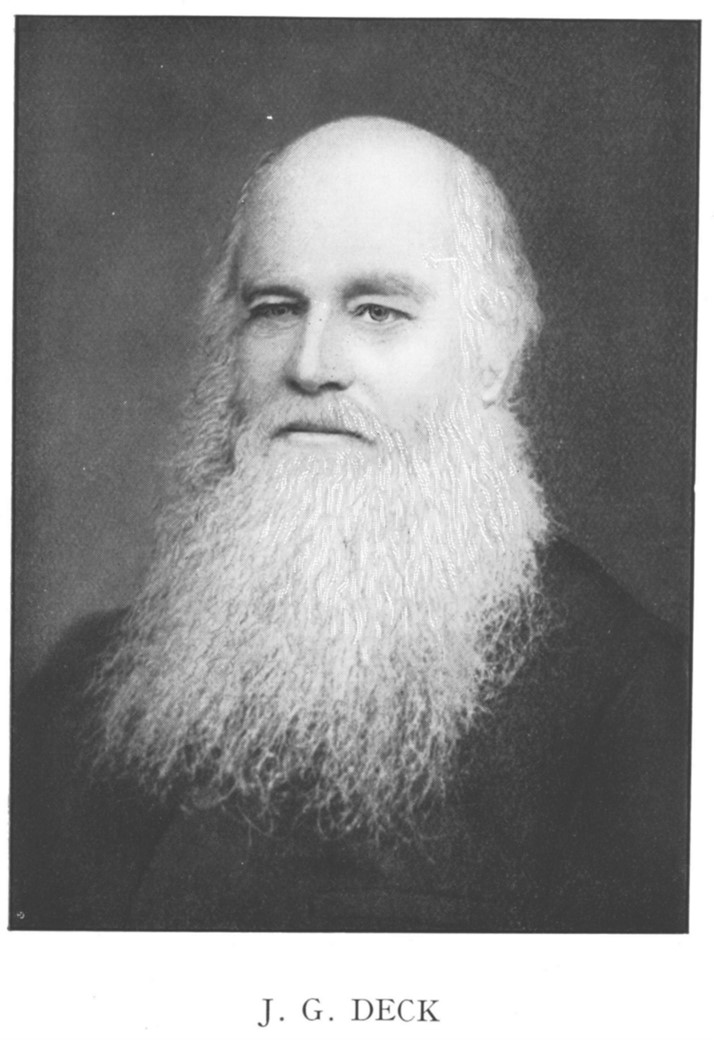 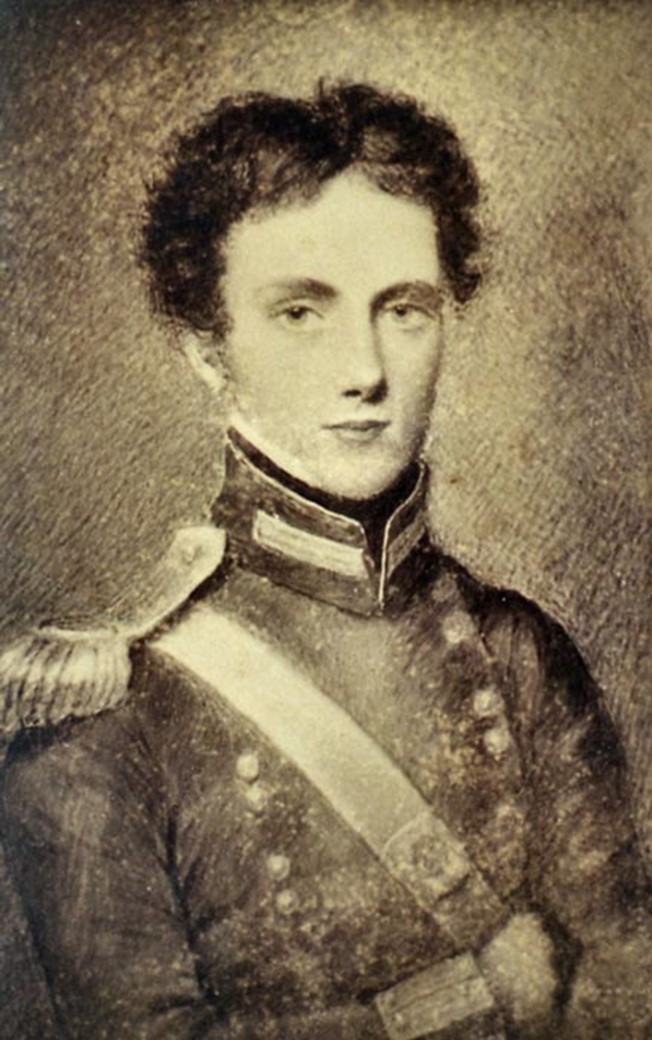 James George Deck, was born 1st November, 1807, at Bury St. Edmunds, Suffolk, and was blessed, like Timothy, with a praying mother, one who used to retire every evening to her room for a quiet hour with God on behalf of her children, and also of her children's children, and who never punished her children without first praying with them. All of her children were early converted and consecrated unto God; a blessing which has descended unto the third generation. One of her daughters, Mrs. M. J. Walker, was the authoress of "Jesus, I will trust Thee," "The wanderer no more will roam" (Believers Hymn Book, 286), besides other well-known hymns.

Having studied for the Army at Paris, under one of Napoleon's generals, Mr. Deck went to India in 1824 as an officer in the East India Company's service, receiving a commission in the 14th Madras Native Infantry. Even then there had been deep conviction of sin, under stress of which he drew up on one occasion a code of good resolutions, signing it with his own blood, only to find himself without strength to keep them. His youthful ambition was that, having distinguished himself in his profession, he might afterwards enter Parliament for his native town.

But God had better things in store for him, for returning to England in 1826, he was brought under the power of the Gospel, and was converted "through a sermon preached by a godly Church of England clergyman whom his sister Clara, herself previously converted, took him to hear." All things became new to him, his life's passion then being to follow Jesus and win souls for the kingdom. About this time he became acquainted with and married the daughter of Samuel Feild, an evangelical clergyman, and in her he found a wife who, through grace, shared with himself the "like precious faith."

On returning to India he at once took his place as a Christian amongst his brother officers, and began boldly witnessing for Christ, a number being led through his instrumentality to know and trust the same precious Saviour. Becoming exercised as to his position as a Christian in the Army he resigned his commission, with the intention of becoming a clergyman, and with this object he returned to England in 1835 with his wife and two children. Whilst visiting his father-in-law, Mr. Feild, at the vicarage, Hatherleigh, Devon, his second son, Dr. J. Feild Deck, was born and christened. An observation made by Mr. Feild in connection with this christening against some Baptists who were troubling his Parish caused Mr. Deck to examine the Word of God upon the question of the "baptismal regeneration" of infants as set forth in the Prayer Book. Not finding such teaching supported by the Bible he became exercised as to his forthcoming ordination as a clergyman, when he would have to declare, ex ammo that he "assented and consented to all and everything contained in the Book of Common Prayer." Approaching his loved wife he said, "I have left the Army to become a clergyman, but now see that the Church of England is contrary to the Word of God; what shall we do?" Her noble reply was, "Whatever you believe to be the will of God, do it at any cost." The Church of England and the promised "living" had to be given up. But, what were they to join? Plainly, what they "found written" (Neh 7:5) must be the test of everything. Seeking thus to be absolutely guided by the Written Word, they presently found themselves in touch with many other Christians similarly exercised at that time, and who have since become known as "brethren." Having themselves been baptised by immersion as believers, there was hence forth no more infant baptism in their family.

Leaving the Church of England and the traditions of men, and looking only to the Lord to supply their temporal wants, a trust never disappointed, Mr. Deck began to witness for Christ in the villages of Colaton Raleigh, Kingston, Devon, seeking, like Ezra, not only to be a "ready scribe" (Ezra 7:6) in the Word of God, but likewise "to do and to teach" the precious truths so recently apprehended in it. It was a singularly godless, High Church, parish, but soon many precious souls were won for God through the preaching of the Gospel, and having been baptised as believers were gathered unto the Name of the Lord Jesus Christ in church fellowship, according to Acts 2:42, as "holy brethren" (Heb 3:1) waiting for God's Son from Heaven (1 Thess 1:10).

It was during this period, between 1838 and 1844, that Mr. Deck wrote most of those hymns which have been his special ministry to the Church of God: "Abba! Father! we approach Thee" (1); "A little while! our Lord shall come" (14); "Lamb of God ! our souls adore Thee" (122); and "Jesus, we remember Thee" (251),* being written in 1838. His hymns were not evangelical, but rather hymns of worship and Christian consecration, in view of our Lord's near return.

His sphere of ministry was chiefly in the western counties of England, residing and labouring after he left Kingston at Sidmouth, Wellington, and Weymouth; with mission visits to Otterton and to East Coker, near Taunton; being much used in these various places in conversions and also in instructing and establishing those who believed in the divine truths and principles which in the Word of God had become so precious unto himself. Whilst in Wellington the late Henry Dyer assisted in the school, and proved a loved and valued fellow-labourer in the ministry of the Word. In 1852 he had an illness and breakdown so severe as to call for an entire cessation from ministry, and that the school should be given up. The medical men recommending a sea voyage and a complete change of occupation as essential to his recovery, it was decided to emigrate to New Zealand.

Arriving in 1853, Mr. Deck purchased land and settled with the family at Waiwerro, near the village of Motueka, in the Nelson province, where three months later his devoted wife, after a brief illness, "fell asleep," and was laid to rest in the Motueka Cemetery. Health having been wonderfully restored, he had the joy before long of witnessing once more in the land of his adoption for his beloved Lord and Saviour.

He removed in 1865 with his family to Wellington, an effectual door of service having been opened to him in that city and province both in the Gospel and in church fellowship, a large and happy meeting being gathered at Wellington and several other assemblies in the district. During this time several more hymns were given him: "Jesus, our life, is risen ;" "Lord of life, this day rejoices all who know Thee, strong to save," etc. He also wrote that splendid baptismal hymn, "Around Thy grave, Lord Jesus" (13), and others, "Father, we seek Thy face," "Great Captain of Salvation," "In love we part as brethren," "Jesus, Thy Name we love," "Lord Jesus, are we one with Thee?" (128), "Lord we are Thine," "O happy day, when first we felt" (189), "Oft we, alas, forget the love," "The veil is rent" (283), and many others.

He paid a visit to Invercargill, the southernmost city in the colony, where his son, Dr. J. Feild Deck, was practising, and in whose house a little company of a dozen had commenced to remember the Lord in the breaking of bread, whom he much helped by his ministry.

Feeling at length with advancing years unequal for carrying on the work at Wellington, he returned with his family to Motueka, where, after being for two years a complete invalid, the Home-call came, 14th August, 1884, in his 76th year; and on Sunday, 17th August, "devout men" laid the earthly tabernacle to rest in the Motueka Cemetery. There was a large attendance, many his own children in the faith, his own hymn, "Thou hast stood here, Lord Jesus," being sung at the grave. His name is fragrant to many to-day, and through his hymns, "He, being dead, yet speaketh." 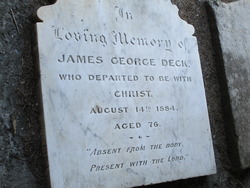