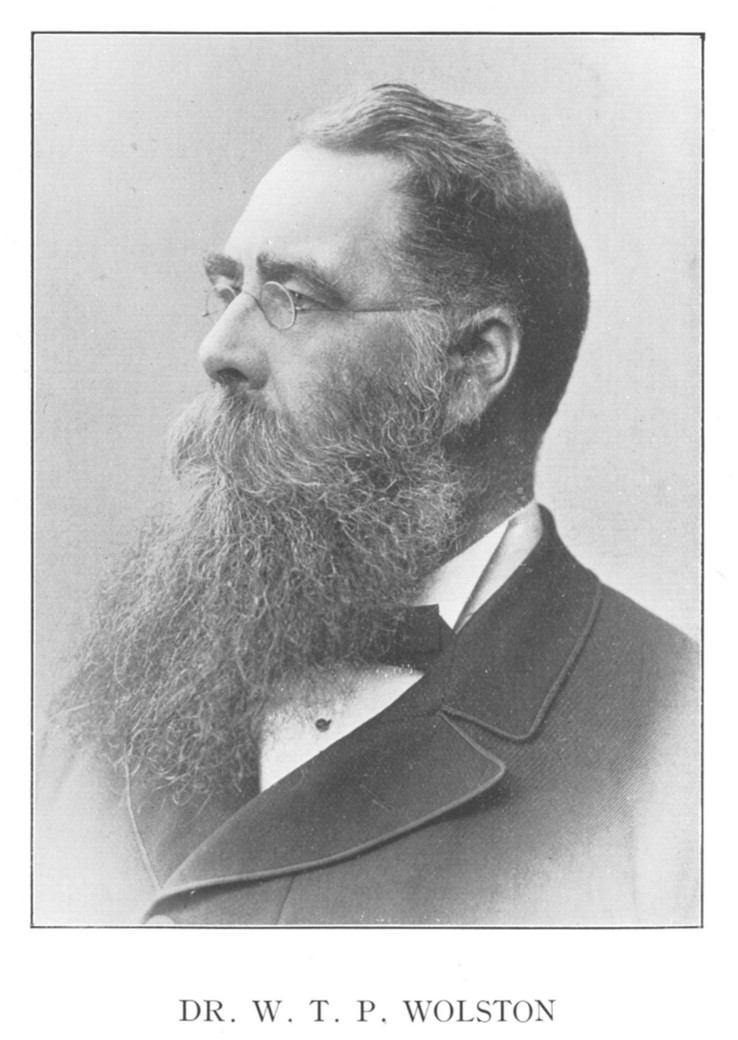 WALTER THOMAS PRIDEAUX WOLSTON was born at Brixham, Devon, on 6th September, 1840. He says himself that before he was converted he was a most thorough going young worldling, deeply immersed in its pleasures and its sin. On leaving school he entered a lawyer's office in his native town, intending to follow the legal profession.

On 4th December, 1860, he left his country home in Devonshire for the great city of London to further pursue his legal studies there, intending to return home for a visit at Christmas, as he had to fulfil a number of worldly engagements in connection with the Glee Band, of which he was a prominent member. Before Christmas came round, however, the Lord had met and saved him. The first Sunday after reaching London it was suggested by a fellow-lodger that they should both go and hear Richard Weaver, the collier preacher, in Surrey Theatre, whose earnest and rousing preaching of the Gospel was attracting thousands. He was convicted of his sin that night, but it was not until the following Sunday evening, after hearing Charles Stanley preach the Gospel, that the light dawned in his soul, and Walter Wolston entered into peace. He immediately came right out for God.

Recognising that a promise is a debt, and that every Christian should honourably pay his debts, he immediately wrote to the conductor of the Glee Band, informing him that since leaving home he had been converted, that the Lord had put a new song into his mouth, and although he was willing to fulfil his legitimate engagements, he could only now sing of the Saviour who had done so much for him. Needless to say he was relieved of his obligation.

He dearly loved the Gospel, and it mattered not what subject he discoursed upon to Christians, he never finished without preaching God's salvation.

In 1864, under the distinct impression that the Lord called him to work in Scotland, even with the offer of considerable advancement, he left Lodnon, and came to Edinburgh, where he was appointed House Surgeon to the Old Infirmary. Afterwards he established himself as a physician in the Scottish capital, where by his skill he acquired a large practice. In Dr. Wolston were combined personality, ability, and grace, so that he was universally acknowledged to be a skilful and kindly Christian doctor. He always found time in the midst of his busy practice to tell out the old, old story, and he used to rent halls and theatres for this purpose. In recent years few business men in Scotland were privileged to preach the Gospel to so many and for so long a period. He had a wonderful influence over young men, and frequently lectured to students in Edinburgh on spiritual subjects.

He was the Editor of the magazine entitled God's Glad Tidings, afterwards altered to The Gospel Messenger, for forty-five years, and many clearly written Gospel booklets have come from his pen. He also produced nine volumes on spiritual subjects, which have been helpful to many. They are: "Simon Peter: His Life and Letters;" "Young Men of Scripture, " "Another Comforter, " "Night Scenes of Scripture," "Behold the Bridegroom," "Forty Days of Scripture, " "Seekers for Light, " and "The Church. " So that by means of the printed page Dr. Wolston has been, through the grace of God, a means of blessing to thousands of both saints and sinners.

He gave up his medical practice in 1909, and thereupon fulfilled a long standing wish to visit Australia and New Zealand. He afterwards paid two visits to Norway. During the second visit to Norway in February, 1915, he was stricken with paralysis, and was brought home to Weston-super-Mare, where he lay helpless for two years. During all this period of physical helplessness he was happy in the Saviour's love, and never was he heard to murmur or complain. A few weeks before the end he had another seizure, which rendered him unconscious to everything of earth, but it was quite evident to his devoted wife he was in constant and uninterrupted communion with the Lord he had loved so long and served so faithfully. On 11th March, 1917, at the age of seventy-six, this devoted worker passed into the presence of the King.